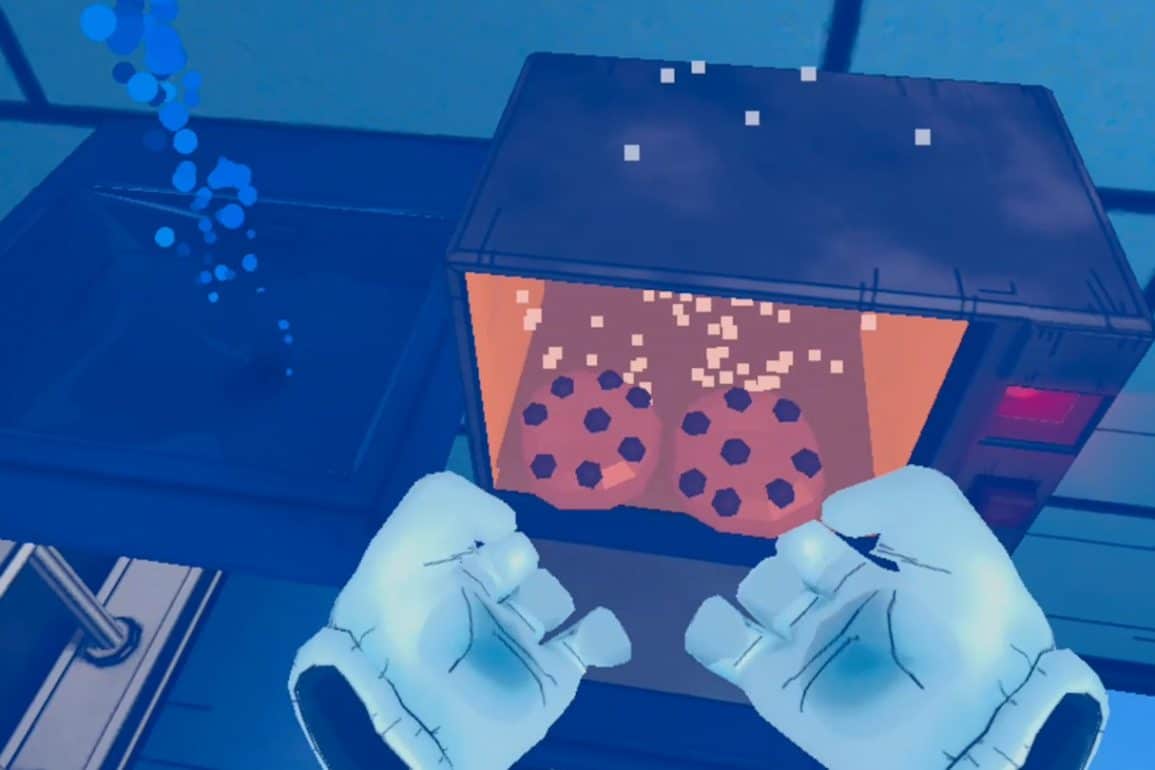 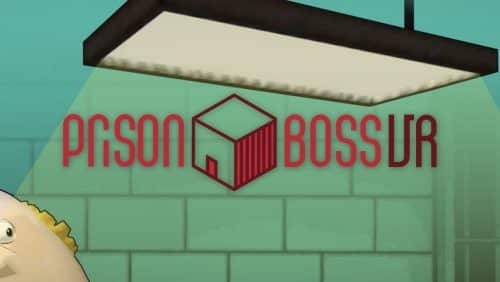 Prison Boss VR will land you in a VR big house and have you wiling away your hard time crafting to gain rep. The thing is, you can only craft at night, and you have to watch out for the pesky guards. You get caught, you lose all your materials, and you say goodbye to kingpin status.

THEY SEND YOU HERE FOR LIFE, AND THAT’S EXACTLY WHAT THEY TAKE

I feel my time spent playing Prison Boss VR can generally be summed up using Shawshank Redemption quotes. The one above sums things up nicely. While I didn’t quite spend a lifetime playing the game, more like 5-6ish hours before I tapped out, it seemed like eons. In fact, when you start your first day in prison, a little bubble pops up that says: “Welcome to the s*#thole!”. At first, I chuckled because I didn’t know any better. Looking back, it seems that Prison Boss VR had somehow become self-aware, and the welcome had been a warning. Its frank self-assessment was spot on because it is, indeed, a s*#thole.

I’M TELLING YOU, THESE WALLS ARE FUNNY

Prison Boss VR starts off funny enough. The tutorial has you watching some black and white “movies” via projector, which will walk you through the basics of crafting contraband smokes. There’s some kinda jazzy music playing and some quippy title cards. A character that looks very much like a potato wearing a hat will explain why the items you’ll be crafting have become illegal. He will then emphasize that even though they’ve shown you a film on exactly how to make an item, that you totally shouldn’t. “Tee-hee!” You will think to yourself, “the fuzz can’t stop me!” It’s always fun doing things you shouldn’t.

You’ll get more of these little tutorials as you progress through the game and earn new “recipes.” They’re also just about the only form of dialogue you’ll get during play. The humor in them is far from high-brow but might manage to elicit a chuckle or an amused grunt. At one point, you’ll be walked through how to make fruit juice, which you have to shake inside a bottle to produce. The tutorial reads, “Shake it like it’s a baby!”. Take that, Carlin and Chappelle! Yes, I laughed. But still, humor only gets you so far, especially when the laughs are so few and far between.

GET BUSY LIVING, OR GET BUSY DYING

Tutorial complete, you will find yourself in your cell. It’s small, dingy and the graphics aren’t remotely impressive. Prison Boss VR‘s aesthetic is decidedly cartoonish and simple, but not even charmingly so. It just looks…lazy and dated. Your cell contains a piece of furniture with a drawer, and this will be key. Soon, you’re introduced to your middle-man. At the beginning of each day, you’ll give this fellow prisoner, shaped like an egg and with no limbs, a fist-bump with your enormous white-gloved hands. Said bro-moment will then result in a window popping up. From here, you will be able to see the jobs available and the items you can purchase to make your goods to complete said jobs. Once you’ve made your selections and sales, you can activate the clock on the wall to skip the day and head to the night hours to craft.

Like with many other tycoon games, you have to be strategic. The prices of materials fluctuate. You can easily craft yourself into zero balance if you simply try to hurdle through the list of jobs. Instead, you have to find a delicate balance between completing orders to gain reputation and unlock new furniture and recipes, waiting for reasonable prices, and turning a profit off of simply trading in your completed goods for cold hard cash. Complete enough job orders and sell enough items, and you’ll eventually be presented with a large hammer to break out of your current prison. Then, it’s off to the next one. There are four prisons in total, each requiring more job orders to be filled and items to be crafted before level completion. Sound repetitive and dull? That’s because it is.

It’s also worth noting that Prison Boss VR can be somewhat confusing about how to actually complete jobs. Jobs don’t auto-complete just because you’ve done them. I spent the first five in-game days or so doggedly crafting cigarettes but then seeing no real change to the jobs page. At first, I shrugged it off and figured it was just extra repetitious for the sake of beginners. But no, to actually complete a job (and earn the rep and recipes and materials that come with it), you must check the X’s next to the jobs you’ve completed in the job list. This isn’t explained anywhere, doesn’t really make sense, and is so counter-intuitive that the tutorial should have explained it.

EVERY MAN HAS HIS BREAKING POINT

My breaking point came pretty early on in Prison Boss VR. I spent the first hour or so dropping things a lot and utterly failing at getting my illicit items hidden adequately in drawers, away from the watchful eyes of the roaming guards. I got caught and lost all my materials twice. My mounting frustration walked hand in hand with colorful language. The controls were unreliable and glitchy, and stacking objects inside drawers was a nightmare.

Once crafting hours begin, you have a pretty good chunk of time out of the gate before the guards start doing their rounds. They walk the perimeter of the floor you’re on. They shine their flashlights and make unintelligible grunting sounds that much resemble noises your passed-out uncle makes on the couch at family get-togethers. Their progress around the prison is pretty easy to track in the beginning. However, by the next prison, you are able to see less, and judging how close a guard is to your cell is much more difficult.

At first, there was a certain element of fun to the inherent sneakiness of the game. I started out using an abundance of caution, ensuring my finished products and components were hidden safely away well before detection was eminent. I wanted the money. I wanted the rep. Prison had made me greedy! I kept going until I had all the furniture and extras I could buy, even though it took me past the recommended number of days to complete the level.

Just under two hours in, I was living dangerously. I was getting better and faster at stashing my stuff but began flinging product between furniture pieces and the wall just so it was out of eye-shot. Once I was organizing my materials according to the finished product, my space was now a haphazard heap of a hoarder’s wet dream. It was like I wanted to be caught. Because I did. I was getting bored. Sure, the erotic letters were fun to craft, replete with illustrations of man-butt, rudimentary nipple-less breasts and feet (deviants!). But, the bloom was off the rose. Especially when I discovered that when you progress to the next prison, you don’t get to take anything with you. You start entirely fresh. All that hard work and surreptitiousness for naught! I felt like I’d been shanked through my criminal heart.

Because I’m stubborn, I kept playing well past the point of boredom. Prison Boss VR‘s repetitive nature gave me an eye twitch, but I kept thinking there had to be more to this game. After a few hours in, my curiosity got the better of me, and I checked the game’s star rating on the Oculus store. I was floored and puzzled by how high it was.

I figured I was definitely missing something. Maybe the game offered day jobs that were legit. You know, stuff like potato peeling or making license plates. Then I might be able to make some extra cash, and my night gig of deviousness could be even more lucrative.

So, I sat through the game hours between when you meet your fence and when you can craft. You meet your go-between at 6am, and crafting hours start at midnight. I thought maybe something would happen. It didn’t. I sat there and counted the black lines in my white-gloved hands ( I came up with 122, but I could be wrong). I tried to play rock, paper, and scissors with the guy in the cell across from mine (he wouldn’t). I accused him of giving me the side-eye and threatened to make him my b#*ch. I watched the clock and tried to will it to move faster. I did crunches, and leg lifts in real life. I tried to grab the bars of my virtual cell and screamed “Attica!” in the realness of my living room. Boredom intensified. I wished a riot would break out. It didn’t.

When midnight hit, the game didn’t even register that crafting hours had begun and still offered me the option to fast-forward to nighttime. I took the out and was actually time-traveled back a bit.

I’ve never been to actual prison, so I can’t say with certainty, but it almost has to be more fun than this game.

Yes, I feel regret. I regret that I gave this game as much time as I did. Had I spent actual money on this game, my regret would have been mingled with shame. Hope can be a dangerous thing. I kept hoping for more. The initial amusement you might feel for the first half an hour to an hour or so is utterly obliterated by the repetition and lack-luster, well, everything. I know that on some level, repetition is inherent to the tycoon-style game genre, but this was taking it to new levels. It didn’t feel innovative or like it elevated the tycoon genre at all. It just felt unapologetically mediocre, with all too fleeting elements of humor peppered in there.

When I was first asked to review it, I joked I would only do it if we got to make toilet-wine in-game. Turns out you can make wine but in a sink. Lame. And that’s the word that keeps coming to me when I think of this title: lame. After a while, Prison Boss VR feels as confining as the cell it puts you in. The concept had potential. Maybe with a multi-player option, it could have been fun. Perhaps with better cosmetics for furnishings or fun vanity items. More variety on every level would have been nice.

I threw in the towel, close to having made it to the third prison, but just shy. If you wanted to, you could likely get quite a bit of playable time from this title. Besides the general gameplay advancement, there is also an “expert” style level and an arcade level where the only object is to craft as much as possible in three minutes for a high score. But, even if you could play this game for a significant amount of time, would you want to? I sure as hell didn’t. Prison Boss VR will be going straight to the trash to free up some valuable space now that my sentence is up.

If you’re going to go to prison, make sure it isn’t this one.

You’ll find much better titles on our top games list!

Prison Boss VR
TLDR : Summary
As confining as it is boring, Prison Boss VR is not where you want to spend your time. If you're going to go to prison, make sure it isn't this one.
Concept
5
Gameplay
3
Graphics
3
Audio
2
Longevity
4
User Rating0 Votes
0
Pros
Amusing dialogue
Simple Concept
Simple Controls
Cons
Simple Concept
Repetitive
Overpriced
3
S*#thole
Get it on the Oculus Store
Prison Boss VR