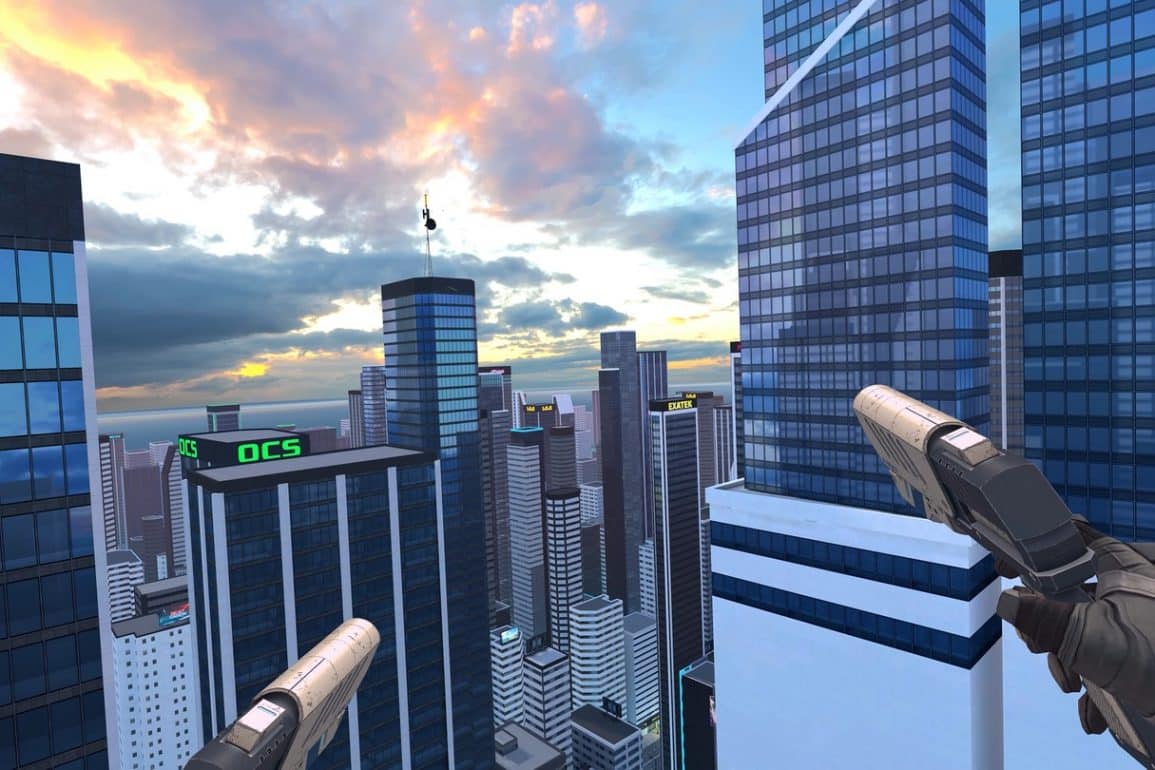 Swinging Through The City - It's Spider-Sam! 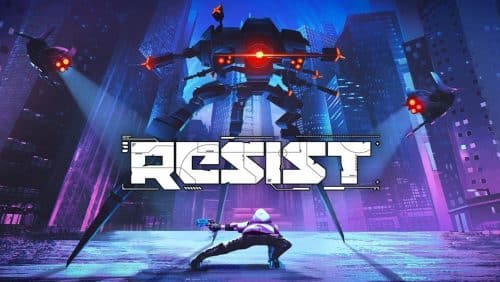 When Resist swung its way onto Quest a few weeks ago, I could only provide some first impressions of the game. Overall, my impressions were very good. However, some issues, most notably with the controls, gave me some cause for concern.

After my early enjoyment of the game was essentially hamstrung by control issues, there was only one real question that needed to be answered for the full review. Have the devs managed to find a way to incorporate nausea-free-swinging into an otherwise impressive game? In a series of rapid, post-launch patches, the team at The Binary Mill has attempted to address a lot of these concerns. Have these early patches done enough to see the game succeed?

The answer, I’m delighted to say, is yes. Yes, they have.

THEY’VE ONLY GONE AND DONE IT

Resist is a single-player, story-driven adventure set in the not-too-distant future. The player finds themselves joining the ‘Resistance’ and sets about the task of wresting power from the elite, disrupting the status quo, and just generally… resisting. As ever, there shall be no spoilers here, but the plot broadly follows the exploits of the game’s heroine, Sam Finch. After being framed for a crime she didn’t commit, Sam finds herself swinging headlong into a tale of intrigue.

The story is pretty decent, taking place over an ample array of missions and will easily be enough to motivate players to see the game to completion. That said, the story alone will not be the only driving factor in keeping players engaged. Resist provides a gloriously conceived open-world cityscape for the player to traverse, and traverse you shall. Armed with a gun in each grapple glove ensconced hand, Resist is the stuff of Spider-Man enthusiasts’ dreams.

After a fairly small amount of training, the player finds themselves launching in tremendous arcs through the skyscrapers of Condor city and effortlessly manoeuvring through the buildings to evade squalls of nefarious drones. There is a limited range of enemies to defeat. Still, those present are fun to destroy and reasonably challenging when faced en masse.

Once you’ve progressed the story a reasonably short amount, you are introduced to the various side quests that Resist supplies. These side quests provide the most liberating flexibility of almost any game on the platform. Bored of the main campaign, or hit a mission that has you stumped? No worries. Swing over to a random starting location and kill a bit of time competing for a top spot on the leaderboard through a series of races, shooting challenges, or a combination of the two.

This flexibility adds depth, diversity, and distraction, and I, for one, think it’s bloody brilliant.

While Resist is decidedly an action title, complete with a gun-toting protagonist at its centre, it is definitely not what I would consider a shooter. The actual gunplay is hardly the star of the show. In fact, far from it, the gunplay is perhaps the game’s weakest element. This is not to imply that it’s bad, but it does feel a little stunted compared to the dizzying heights that the rest of the game offers. There are only two weapon types: an incredibly satisfying and efficient pistol and a rather ineffectual shotgun-style attack.

Both weapons are upgradable, and investing in upgrading your arsenal will yield dividends of destruction, but still, it would have been cool to have a few more options at your disposal. That said, once you get the hang of swinging around the city and skitting between buildings and circling back on enemies to attack from unsuspected angles, any concerns over your pew-pew disappear. There is only swinging, shooting, and evading at this point, and nothing else really matters.

As the plot of Resist unfolds, so too does Sam’s ability as a pretty complex progression system unlocks a range of character refinements. These branching pathways focus on traversal, weaponry, and auxiliary traits and allow for a fair amount of customisation in how you want to play the game. Some paths upgrade paths are clearly more important than others. Still, there are enough of them to constantly goad the completionists amongst us.

When it comes down to it, though, Resist is really all about the freedom to swing through an impressively proportioned open-world city while living out your most heartfelt Spider-Man fantasies. The intriguing story, varied missions types, and the plethora of side missions are all excellently crafted. At the end of the day, if Resist had just been an enormous swing box, it still would have been excellent. The feel of swinging down a crowded street at exceptional speeds or soaring to incredible heights over impossibly tall buildings is simply fantastic and, in and of itself, well worth the price of entry.

It’s probably important to note here that, in the pre-release copy that I initially played, the movement controls yielded some of the more severe motion-sickness that I’ve ever experienced. I could see how excellent a game I had before me, but I couldn’t properly immerse myself because the whole process was intimidatingly nauseating. However, the good news is that all of these issues evaporated as soon as I started using the new “Detached” control style. Now, with the sickness gone, all that is left is the blissful, swinging action that The Binary Mill set out to deliver, and I, for one, couldn’t be happier.

Resist is, quite frankly, a beautiful game.

The visuals are far beyond what I’ve come to expect from the Quest, offering a crisp visual world that is a joy to inhabit. Even hours into playing, the sheer scale and detail that The Binary Mill have achieved continue to be astounding. From subtle touches like the reflections in the windows down to the cars and pedestrians occupying street level, everything in Resist works seamlessly to craft a believable and immersive world.

It’s also worth noting that far from just being pretty, Resist is also a technical achievement worthy of praise. Even when fending off drones and swinging at break-neck speed around the bustling city streets in the thick of the action, Resist never dropped a single frame in my entire playthrough. Given that the Quest’s limited chipset is dealing with a large open environment, multiple NPC’s, and a complex, physics-laden movement system, The Binary Mill have delivered a masterclass in optimisation. Other devs could well take notice of Resist‘s accomplishments.

Rounding out the tour de force that is Resist is the sound design, and again the work here is nothing short of exceptional. All of the audio cues speak to an incredibly high production value, with every single component doing its part to enhance the game’s feel, tone, and tension. From the appropriate robustness of the enemy sounds to the gloriously ambient sounds of swinging through the city, there is not a single sonic element squandered.

This is never more prominent than in the voice acting, which for my money, is some of the best in the ecosystem. Each of the handful of characters is portrayed with depth and nuance, allowing for a real sense of character. This deepens the immersion and enhances the sensation of playing something of an unusually high calibre.

Resist is a class act, pure and simple. Bringing an unprecedented open-world format that impresses with its scale and nuance, Resist is the perfect blend of arcade fun and narrative-driven adventure. It also provides a graphical sophistication that is remarkable given the game’s scope and some absolutely top tier voice acting to round the experience off.

Resist is a game designed for those who enjoy intense movement in VR. The swinging mechanics may not be for everyone. Despite the range of comfort options, newer players to VR should probably approach this title cautiously. That said, the latest range of updates seem to have found the secret sauce and added that final ingredient that was initially evasive.

Overall, Resist is one of the most well-delivered games currently available on Quest, and I, for one, cannot recommend it highly enough.

Resist
TLDR : Summary
Resist offers one of the most complete gaming experiences available for the Quest. With a great core story, challenging and rewarding side quests, outstanding graphics and top tier sound design, Resist really is the complete package. Buy it. Buy it now.
Concept
9
Gameplay
9
Graphics
9
Audio
9
Longevity
8
User Rating0 Votes
0
Pros
Outstanding visual presentation
Excellent story design
Exciting and unique movement system
Engaging story Huge amount of side missions
Cons
Some may have an issue with motion sickness
Campaign length may leave some wanting more
Limited weapon and enemy types
9
Exhilarating
Get it on the Oculus Store
Resist