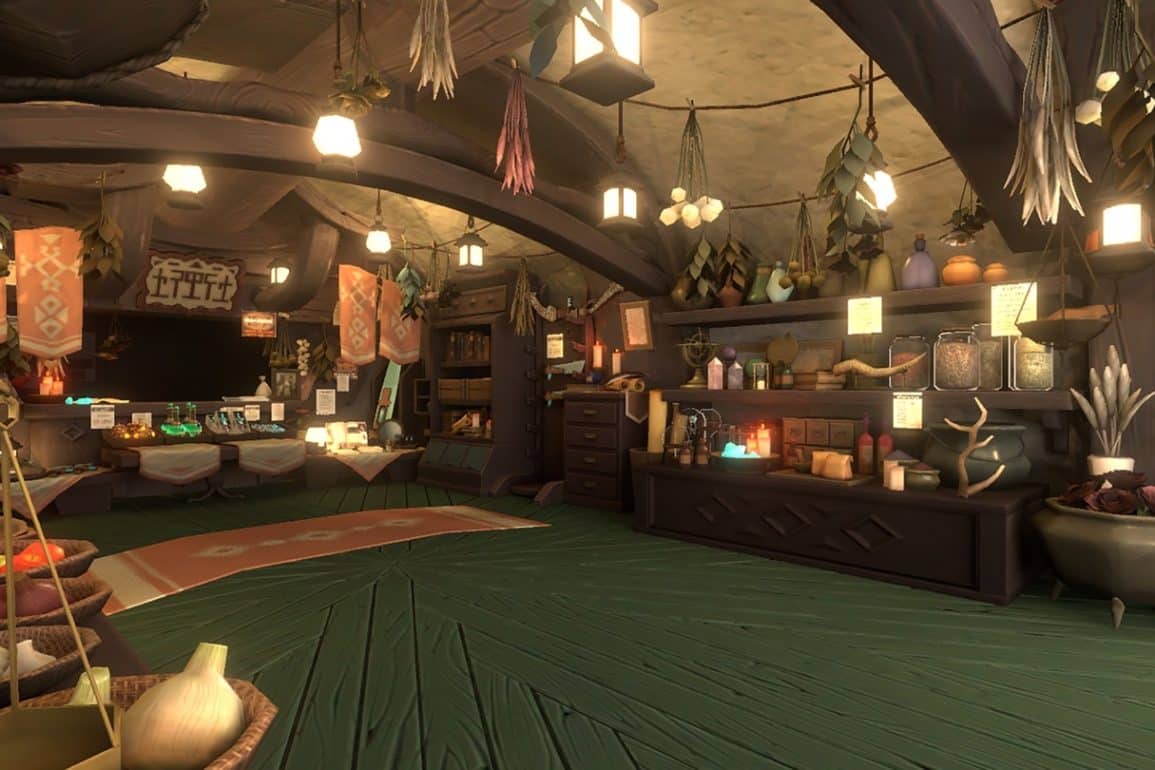 New JRPG Ticks All The Boxes, But Is It Any Good?

RPGs aren’t a genre you could accuse the Quest or VR of being overburdened with. So there’s no doubt a hungry audience awaiting RuinsMagus, a game that is not just an RPG but no less of a VR rarity than a J-RPG.

The game is split broadly into two sections. An overworld where you, as the titular newbie Magus, wander around tiny, invisible-walled areas talking to excitable, wide-eyed characters – and the dungeons, where you wander through endless grey corridors filled with identikit baddies, the majority of which look not unlike placeholder assets.

The overworld has nothing that could even broadly be described as ‘gameplay’ that (such as it is) is reserved for the dungeons. Here the player must make their way through a series of near-identical rooms, occasionally battling low-level enemies until they reach the goal where a damage-sponge boss of some description invariably awaits.

The combat system requires plenty of movement; when mastered, the limited number of skills and attacks can be fun to unleash. There’s a shield with a timing-based parry ability that’s pretty satisfying, and this is paired with standard, special, and super-level offensive spells. Of course, this wouldn’t be an RPG without levelling up, and there’s a decent amount to be tinkered with here, albeit tucked away behind some very clunky menus.

Button assignments and gestures are also somewhat lacking in grace, with several attacks tethered to an ill-conceived throwing mechanic and others that are totally unintuitive in the heat of battle. The main attack is point and shoot, which is at least consistent in its execution – something that can’t be said of any other offensive abilities.

Going through the potions

The character and background art in the overworld story elements of RuinsMagus are rendered in a soft, painterly style, never less than charming and often genuinely beautiful. With that said, like much of the game, it feels like something we’ve seen a million times before.

From the cobbled streets to the doe-eyed waifu companion, the game is remorseless in its drive to tick every cliche box on the JRPG done-to-death checklist.

In the dungeons, things are even worse, with every level built from a limited array of grey blocks arranged in such a way as to make it as awkward as possible to move from one point to the next. Enemies, as I’ve mentioned, are so dull that it’s hard to describe them… There’s a flying one, a fast one, a heavy one. They are all, predictably, grey and utterly devoid of anything approaching AI.

For scrying out loud

Voice work is all Japanese with subtitles, which I know will delight a lot of people, but, personally, if I want to read, I’ll grab a book. Repeatedly clicking ‘A’ to rush through overlong and melodramatic exposition is not my idea of a fun videogame.

Fundamentally there’s not a lot ‘wrong’ with RuinsMagus. It’s not broken or offensively bad; it’s just that the entire project is so terminally average. And while there’s a degree of quality in the overworld, it’s impossible not to crawl the dungeons that form the meat of the game and not become overwhelmed by all the literal and figurative greyness.

Lack of variety is an enemy that the half-decent combat system cannot overcome, and sadly, though the average game-time to completion is reportedly 6-7 hours, I lost interest after just 2.

I know some believe this makes me ill-equipped to review the entirety of the game. But my perspective is that it’s the game’s job to keep me engaged from beginning to end, and should any game fail to do so, then abandoning it unfinished is just as valid a judgement as anything I could write about the final two-thirds of the game.

With so little competition in this genre, RuinsMagus feels like a missed opportunity. It only needed to be a reasonable amount of fun to garner a massive fanbase in VR. Alas, it fails at clearing even that low bar with an approach so safe, familiar, and unoriginal that it renders itself utterly forgettable.

RuinsMagus
TLDR : Summary
The only thing that Ruins Magus does well is to serve as an example of how mediocrity is often a worse trait in a game than just plainly being bad. Utterly average in every way.
Concept
4
Gameplay
5
Graphics
5
Audio
4
Longevity
3
User Rating0 Votes
0
Pros
Good graphics in the overworld
Might be fun for new players of JRPG's
Cons
Terrible graphics in the dungeons
Terrible Music
Cliché-ridden
3.5
Greyed-out
Get it on the Meta Store
RuinsMagus