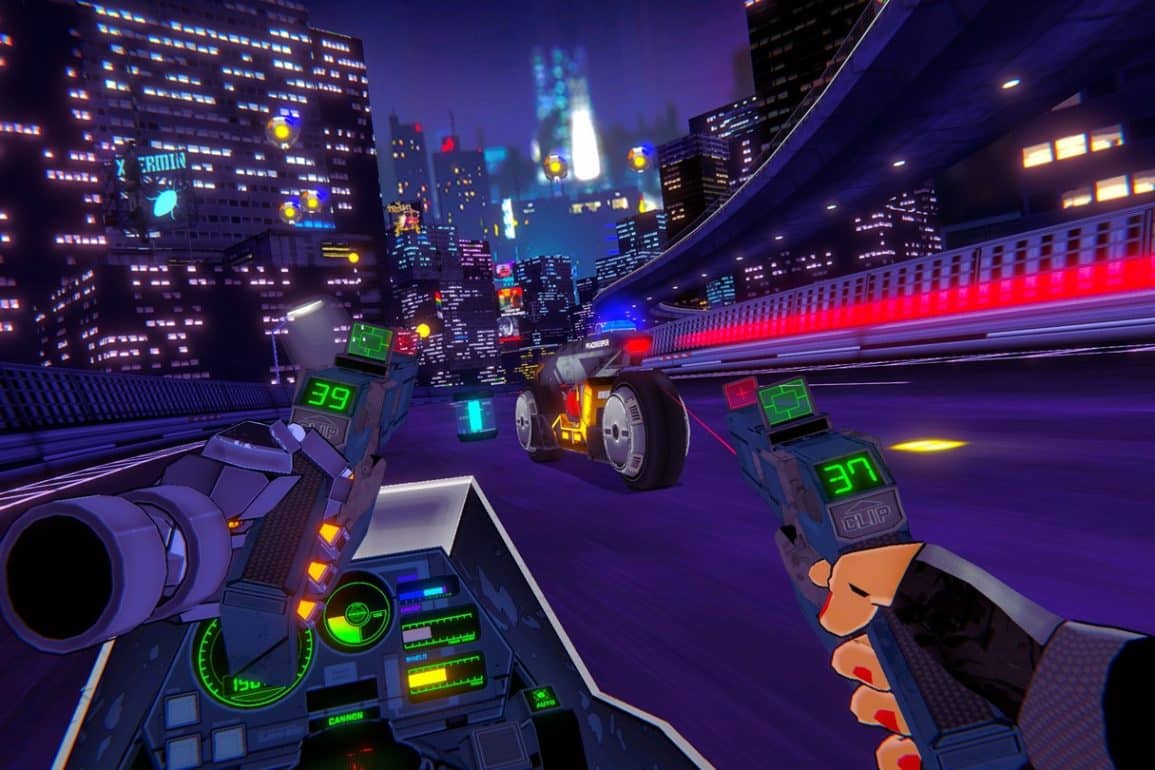 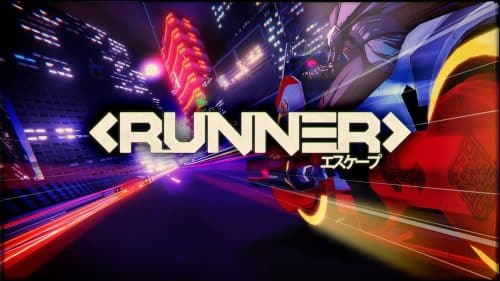 The developers of <RUNNER> (which we’ll be referring to as simply ‘Runner’), Truant Pixel began their game development journey with an Otome-style visual novel called Akash: Path of the Five in 2019. In 2020 they took a swerve and followed this up with 2MD: VR Football, a gridiron game that received a sequel just last month and which is available on Quest as 2MD: VR Football Unleashed. Runner marks another abrupt change in direction for the three-strong team, being what they describe as an ‘Arcade Inspired VR Driving Action game’.

I haven’t played their earlier titles, but a little research has shown that they are almost universally well-regarded, albeit in what are perhaps niche markets.

But regardless of the quality of Akash or 2MD, it’s hard to deny that it’s a bit of a leap from visual novel to American Football to arcade driving action – so let’s get stuck in and see if Truant Pixel can pull it off.

You start Runner in the alleyway of a neon daubed future cityscape with a tarp-covered motorbike in front of you and a computer terminal to your right. On the terminal, your contact/handler “Vice” tells you that you need to escape the city, and the only way of doing so is by taking on the attack drones of the sinister Caldera Corporation head-on through the city’s main motorway network.

It’s worth noting here that there is a prologue of sorts called <PREAMBLE> available for Runner. This free interactive story is available to download on iOS, Android, and PC and although it’s not necessary to have experienced it before playing Runner, it does set up the world and characters rather well. There is some rather heavy-handed noir-ish writing, but nevertheless, I would definitely recommend giving it a look.

However much (or little) lore you choose to consume beforehand, the game proper starts when you grab a couple of guns, hop onto your motorcycle, and tear off into the perpetual night.

You travel along the 4-lane road automatically, with the game taking care of corners for you, but you do need to use either thumbstick to move left or right across the tarmac, and to accelerate and slow down.

In an early prelude to the deceptive complexity on offer, your weapons are docked into the console of the bike when not in use and serve as steering controls. In the opening levels, dual wield is not possible so when one hand is taking care of the shooting, the other is controlling the bike. Every time you expend a charge of ammo you have to switch hands. It takes some getting used to but is very satisfying when it clicks.

Layered onto this is a slew of other combat options. There’s a front-mounted cannon on your bike for which power-ups are available in the time-honoured collect-an-icon fashion. Upgrades are also available for your sidearms and can be equipped individually. There’s a laser-sabre for deflecting incoming enemy fire, missiles with lock-on capabilities, magnetic grenades, and a chargeable special attack called Flux… and this is just the level one basics.

Upgrades to all these, and to your bike itself, are also provided between each of the game’s 7 levels and help to provide a sense of progression.

The levels are distinguished by small changes to the palette, roadside architecture, evolution of the in-game enemies and, at the end of each, increasingly spectacular boss battles.

With drones high above you, and enemies constantly dropping behind or streaming ahead, Runner does an excellent job of wrapping its world around you in the VR space.

With this in mind Truant Pixel have wisely included some very effective comfort options for Bike Lean and VR Vignette, each with an assignable value from 1 to 10 so you can find your own sweet spot.

It doesn’t take an anime or sci-fi aficionado to pick up the various inspirations for Runner’s visual design and tone. In the depiction of the city and all of the various motorbikes you ride in the game, the influence of Katsuhiro Otomo’s masterpiece ‘Akira’ are front and centre. A broader aesthetic of nineties anime is used for cutscenes and story sections, with the character art, in particular, being a beautiful recreation of Japanese animation from that era, while the fully voiced dialogue echoes the gloomy future-noir of Blade Runner.

As you might expect, the art style leans towards the popular cell-shaded low polygon end of things and carries it off with no little panache. There’s a dash of Atari’s S.T.U.N. Runner in some of the vehicle designs and I was often put in mind of Playstation cult classic horizontal shooter Einhander, particularly in the audio design, where police sirens constantly blare and a voice over a loudhailer occasionally breaks through the explosions and gunfire to become almost lyrical alongside a soundtrack that touches on the genres of electro, synth wave, and Industrial dance at various points during the action.

As much as Runner is a very tight and linear experience, procedural generation has been used to add variety along the way – but it’s not entirely successful.

These random systems are often applied to a type of obstruction that crosses the whole road at various places. The exact style of these changes for different stages, but each is basically a barrier in the road with a switch above it that must be shot to allow safe passage.

Problems occur when the procedural generation places the switch section inside a bridge, wall or tunnel artefact, making the target impossible to hit and the obstacle impossible to pass without damage. This isn’t a common occurrence, it happened only a handful of times in my many, many, game runs, but it is doubtless an area that could use a little polish.

Another niggle that may be more down to personal taste was the death sequence. Whenever your run is unceremoniously ended – and that will happen a lot – the same sequence plays: Everything stops, and a whiteout anime-style explosion envelops the screen.

It’s definitely in keeping with the rest of the game, but I would have preferred something a little more dynamic, or at least relative to the cause

Re-run for your life

If I were to tell you that Runner could be finished in 90 minutes you might raise a justifiable eyebrow. But, while it’s true that this is possible, the amount of practice and play time required to do so makes a mockery of any lack of content fears.

Runner is designed to be played multiple times, and its difficulty level is such that after my first 90 minutes of play I’d only just encountered the opening level’s boss.

There are also unlockables and achievements to discover, with nuances of the story that are unlikely to be seen in a single play. All these factors combine to easily over 10 hours of content for players who want to see it all – and that’s a very decent quantity of bang for your fifteen bucks.

What Runner does brilliantly is take all the elements of classic arcade games and bring them to VR in a way that many others have failed to achieve.

Whether it’s old-fashioned power-up icons, screen-clearing special weapons, giant enemies with glowing weak spots, or riotous sound design; it’s all brought thumping and wailing up to date in a game that oozes style and energy, and is delivered with an extremely challenging, but hugely addictive gameplay loop.

The feeling you get from taking on the constant barrage of enemies with the huge and varied arsenal at hand while weaving through traffic and dodging incoming fire is up there with the most visceral experiences I’ve had in VR.

Runner is a cacophony of high-octane entertainment from the very first moment to the very last. If the straightforward thrills of arcade-style experiences aren’t your thing, then I doubt this will be the game to win you over. But for everyone else, this is a good old-fashioned, all-out, gun-toting, anime-action movie of a game that shouldn’t be missed.

No one will be calling Runner ‘the future of VR’ any time soon, but it’s definitely the future of my Quest 2 for a good while yet.

TLDR : Summary
Runner is all action, all the time with a level of style and charisma only matched by its level of challenge
Concept
8
Gameplay
8.5
Graphics
7
Audio
9
Longevity
8
User Rating0 Votes
0
Pros
Impressive voice cast
Bombastic soundtrack
Stylish visuals
Challenging, addictive gameplay
Hugely replayable
Cons
Some procedural generation glitches
8
Riotous
Get it on the Meta Store