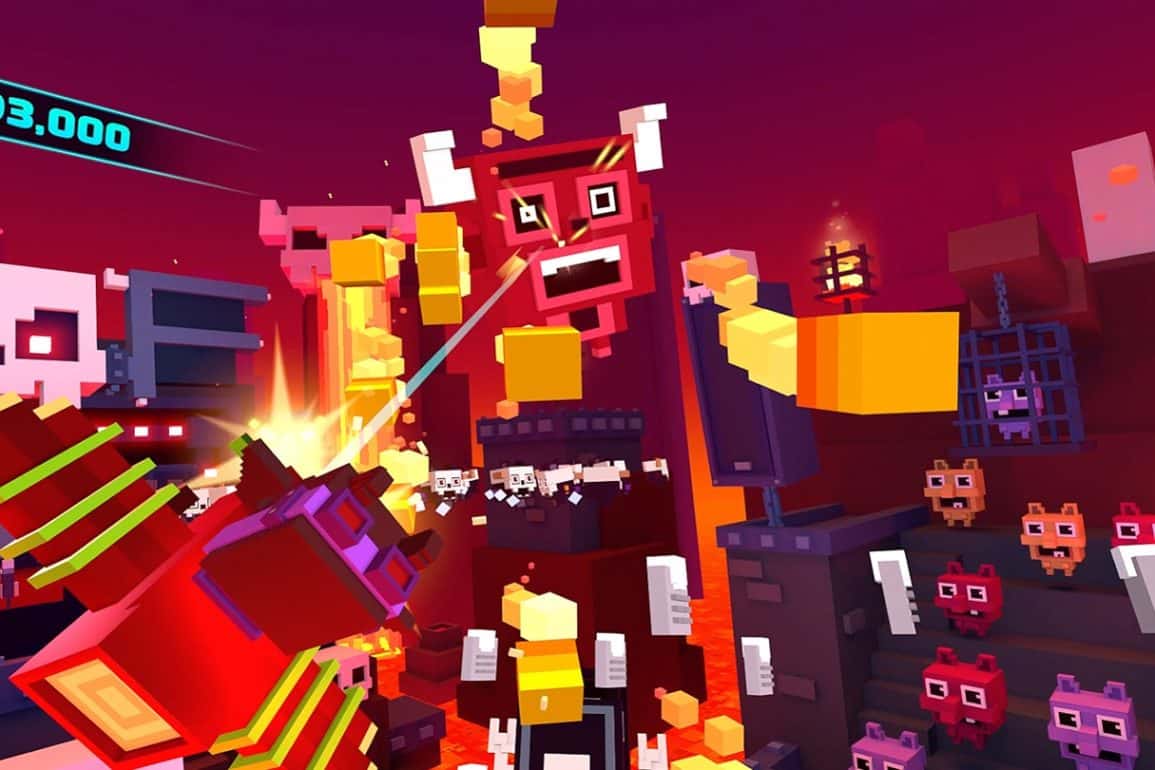 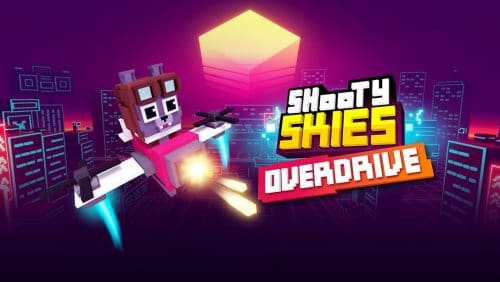 The creators of the fun and popular flat PC and mobile games Shooty Skies and Crossy Road have teamed up to bring us Shooty Skies Overkill in VR. Let’s have a gander and see if the breezy cartoon shoot ’em up brings something worthwhile to the Quest.

Shooty Skies Overkill plays a little differently to a scrolling shoot ’em up, like the original Shooty Skies. In this, your right hand is your avatar and weapon, by default a blocky cat in a biplane. It’s very much meant to channel the way you might have played with a toy plane as a child, sweeping it through the air shooting imaginary baddies. It’s a neat and under-used idea for VR, if not an original one, and it feels very natural and familiar to play. The playfield is your room, a static space. You’re free to move around dodging enemies and projectiles with as much physicality as you may wish to bring. However, you can also play it sitting down too if that doesn’t appeal.

There’s a campaign mode to play through featuring procedural waves of irreverent enemies, and fixed checkpoints and bosses to face. You’ll see retro gaming-inspired setting and enemies, referencing (in a non-copyright infringing manner) all sorts, from the ghosts of Pac-Man to the weird chicken knights of Joust. There’s a candy world, and even a joky version of Hell which pretty blatantly references Doom, including a comedy extending chainsaw. It’s all very light and fluffy though, kid-friendly, irreverent and amusing rather than scary or surreal.

What is surprising about Shooty Skies Overdrive is how involved it can be. It’s a little galling when you learn that it’s an actual bullet-hell shooter of the old school, despite the fluffy aesthetic, and the challenge can ramp up quite quickly. With your right hand being both your weapon and your hitbox, and your head simply acting as a camera, it feels quite different to play than a lot of other VR shooters in which avoiding bullets means moving your head out of harm’s way. It can be quite overwhelming when the air around you is filled with bad sods and comedy bullets. It’s also liberating when you realise that you can jump and duck and contort yourself to avoid damage. There’s definitely a challenge here, and a considerable one. It’s ameliorated slightly by the difficulty setting you choose to play on. ‘Chill’ gives you three heart hit-points, so you’ve got two more chances if your avatar gets hit. Put it on the titular ‘Overdrive’ though, and you’ll face increased numbers of enemies, and a heavier barrage of bullets heading your way – with a strict ‘one hit and you’re dead’ policy on the door. Despite the aggravation that dying can bring, Shooty Skies Overdrive is fair and rewarding enough that you feel that you can do better next time. You’ll be repeatedly tempted to mash the retry button.

One of the things that keeps Shooty Skies Overdrive exciting and fun is the random powerups you pick up through the levels. These are assigned to the left hand and can vary from straightforward stuff like shields, a secondary ‘Pug Gun’ for additional firepower and smart bomb-style meteors to throw about, to silly but fun stuff that takes a bit of skill to use, like yo-yos, bullet vacuums and even a trumpet that fires fatal parps, and must be held like a real trumpet. It’s a great variety of stuff, and the characters you unlock through the game give you different drop rates of different items. So you can mould the playstyle to suit you a little. It’s surprisingly involved for a simple wave-based shooter, and that adds a bit to the longevity and appeal of the game. As does the addition of small challenges as you go through the game, awarding unlockable perks for killing a certain number of enemies, or successful deployment of powerups, and so on. This is to be perhaps expected from developers who’ve done well navigating the attention span vortex presented by mobile game development, but they’ve made Shooty Skies Overdrive addictive and moreish in the right ways.

Unfortunately, all is not well in the bright, shooty skies. If there’s one thing that really hurts Shooty Skies Overdrive, it’s that the audio is pretty poor. Despite the fun sound effects being in themselves OK, the spatial audio is average at best, and everything is a mush. Even with a decent pair of headphones, there just isn’t enough differentiation and panning of sounds. Through the Quest’s standard speakers, it’s muted and compressed. What should be an exhilarating and frantic spin round to identify threats before they hit you is just a frustrating melange of noise; the music might not as well be there.

Add this to the visual chaos of lots of varying bullet types being hard to differentiate, and it can really annoy. Good 2D shoot-em-ups might bombard you, but they make the bullets bright pink or something, so you have a fighting chance. Whilst Shooty Skies Overdrive presents a fun use of VR in a shooter, it doesn’t use audio in the way it should, and as such it’s a missed opportunity and not quite in the same league of quality as the likes of Space Pirate Trainer. It’s pretty forgivable at the cheap price point they’ve set for it though.