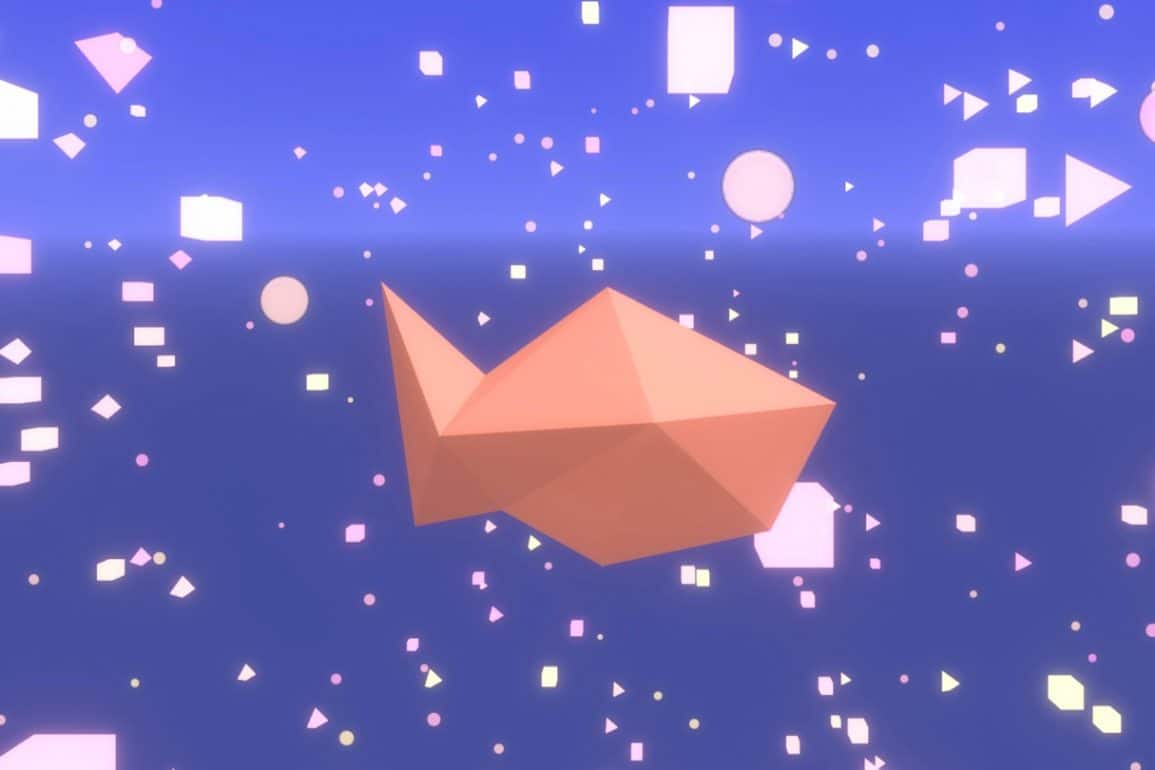 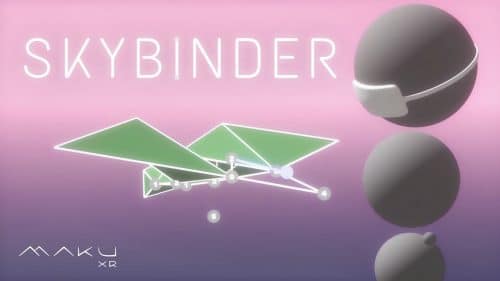 Skybinder is one of the latest games available via App Lab, Oculus’ tool for independent developers to bring their products to the platform without the hassle of approval or side-loading.

Maku XR’s relaxing puzzle game is just one of over 500 apps (as of August 2021) that have appeared on the ungoverned sub-platform since its launch less than a year ago. Understandably, there are many ‘unfinished’, ‘in progress’, and ‘experimental’ projects along with the more polished or completed products. This, a problem true of every digital storefront, makes it harder to separate the digital wheat from the chaff.

Three is the magic number…

Skybinder is a minimalist game in every way. I know some will read that word, minimalist, with disdain – and I feel your pain. It’s become an overused adjective that often appears in-game blurbs and press releases to obfuscate what is actually a simple lack of quality. Nevertheless, bear with me (and Skybinder), and you’ll learn that on this occasion, at least, minimalist is not a by-word for ‘simplistic’ or ‘basic’.

This is an experience comprising 20 puzzles, each slightly more complicated than the last. Each starts with a vast empty space into which various numbered circles will appear with a ‘pop’.

Given a cursory glance, it would be forgivable to mistake Skybinder for a three-dimensional dot-to-dot. Fortunately, this is not the case. The player attacks each puzzle by joining the dots together to make triangles and then joining the triangles together to form zoological models. Any three dots can be joined, with the number on each dot representing the number of other dots to which it must be linked.

Each constellation of dots can be rotated about the Y-axis, raised and lowered, pulled towards you and expanded and shrunk. This is all handled with very slick VR controls. Primarily using the grip triggers, you grab, turn, pull, push, and stretch in the most intuitive way you can imagine. It all feels remarkably physical and, while this isn’t a new way of using VR, it’s a particularly sharp implementation. As the models get larger and more detailed, the feeling of physicality also increases. Expanding the puzzle to a size large enough that you are engulfed by it on all sides is incredibly satisfying.

The sound effects are light and pared-back, and there is no background music in the levels at all. There are also no lives, no timer, and none of the usual limitations or restrictions.

You build the model, one triangle at a time. When complete, the animal, in all its low-polygon glory, floats off into a big shimmering portal that magically appears to whisk it away.

Every triangle has three sides…

To readers of a certain vintage, ‘Low-Polygon’ is likely to conjure images of Sega’s ‘Virtua’ series of games. There’s absolutely a little of that in how Skybinder presents itself, albeit with better anti-aliasing.

Mostly, the game’s hard white-edged and two-tone polygon aesthetic reminded me of Tetsuo Mizaguchi’s turn-of-the-century masterpiece, Rez. This similarity is especially true in the later levels, when the complexity increases, far beyond that of the opening rudimentary goldfish model, to deliver some genuinely beautiful designs.

In fact, I grew so enamoured of the two-tone, white edge look of Skybinder‘s presentation that sometimes I was a little disappointed when puzzles transitioned to their final form upon completion.

The numbered dots, central to the game’s mechanics always face the player. This is to ensure that their digits are seen at all times no matter how you move or turn the puzzle.

There are no extra trappings beyond the in-game elements; everything takes place in an infinite, wide-open space where even the controllers in your hands are reduced to simple spheres. There is just you, the puzzle and softly chiming piano chords that greet a successfully completed triangle.

Skybinder is a puzzle game that’s proudly ‘Zen’. If you’ve ever played one of these before, you’ll be immediately familiar with the sound design. The usual melancholic keyboard sounds are here, sparsely accompanied by soft whooshes, clicks, and pops as you manipulate the puzzle. You’ll hear a couple of notes every now and then if you hang around in the menu long enough. Still, there’s nothing that would constitute anything as complex as a piece of music.

Somewhere in that ancient mystic trinity…

As appropriate and pleasant as the sound is, it’s the weakest area of the game. There’s not really anything ‘wrong’ with it per se, but it’s very much the same collection of noises you will have heard many times before if you have any interest in this kind of laid-back experience.

In terms of delivering what it sets out to, Skybinder is otherwise an almost total success. Only the hint system feels a little unpolished. Rather than a prod in the right direction, it immediately displays what the finished puzzle should look like. Seeing your industry’s product is very much the motivation and reward for your efforts, so simply showing the player the completed model is borderline self-destructive.

The past and the present and the future…

Some may also be put off by Skybinder‘s brevity. I’d estimate 5-6 hours to see all 20 puzzles through to completion, and when they’re done, they’re done. You can select them to play again from the menu, but when reveals are the only real draw, knowing which animal you’re going for from the get-go detracts hugely from the whole experience.

There is a (currently greyed out) shopping trolley icon in the settings menu, so perhaps there are plans to support the game with some more content in the future.

The heart and the brain and the body…

For a game that prides itself on being relaxing and contemplative, Skybinder is furiously addictive. I lost myself in its calm atmosphere and compulsive gameplay enough to complete it in two sittings. Had I not succumbed to this annoying habit I have of falling asleep at least once every twenty-four hours, I could easily have done so in just one long session.

The difficulty curve is masterful. Skybinder handles the progress from the initial puzzles, made of less than a dozen dots, to those, later on, that use more than a hundred without a hitch.

Every puzzle starts with a search for a single triangle and succeeding at this simple task feels like a tiny win. As you work your way through to completing the model, one triangle at a time, it’s all too easy to get caught up in the flow. Skybinder never becomes fast-paced, but at its best, it moves to an assured timbre that is entirely in keeping with the mood and style of everything else in the game.

As you complete one puzzle and it drifts off into the distance, the next one begins immediately. As a new set of dots pop into view, it’s impossible not to wonder what animal they will eventually shape, which trio of dots would form that first triangle…

The hyper minimalist approach can sometimes veer dangerously close to being ‘too basic’, particularly in the main menu and settings. Ultimately, however, Skybinder achieves a perfect balance of simplicity and style. If this kind of game suits your tastes, you might also want to take a look at Cubism.

Skybinder
TLDR : Summary
For better, and occasionally for worse, Skybinder is minimalist in every way. Its hyper-stylised look and laid-back delivery mask a compulsively addictive Zen-puzzler that will soothe you along to its final puzzles all too quickly.
Concept
8
Gameplay
8
Graphics
7
Audio
5
Longevity
5
User Rating0 Votes
0
Pros
Clean minimalistic graphics
Relaxing Zen approach to puzzles
Cons
Audio too minimalistic
Offers little replayability
7
Compelling
Get it on the Oculus Store
Skybinder