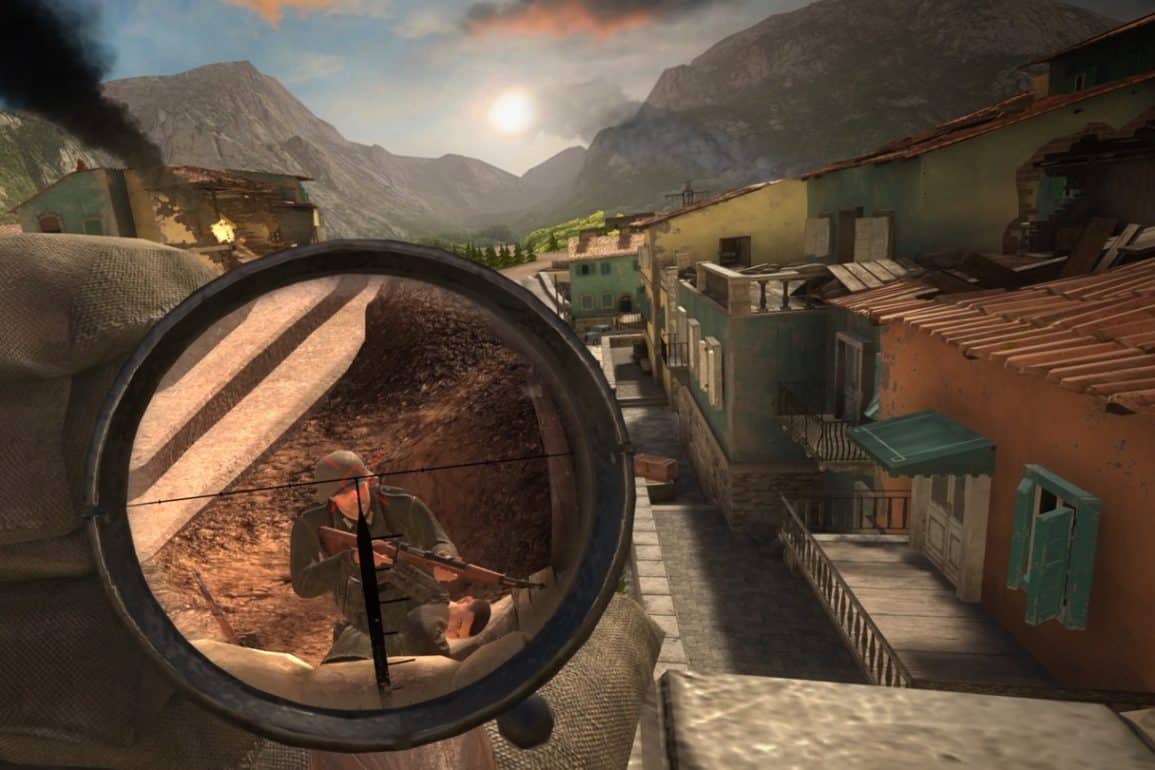 Sniper Elite Comes to Quest! Ready for your Kill-Cam? 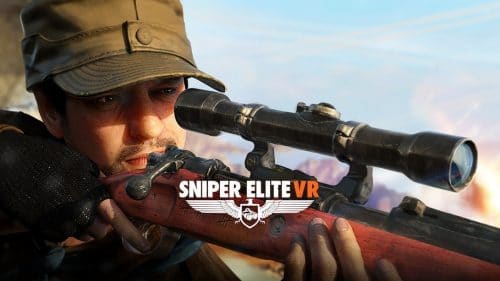 Well, stone me. The last game I reviewed for this esteemed channel was Zero Caliber: Reloaded, a title as janky as it was fun. It made me opine that it really was high time that the Quest had a slick story-based FPS with high production values, one that didn’t require so many leaps of faith and compromises to enjoy. Sniper Elite VR seems to have heard my plea, arriving on the Quest with the cocksure swagger of a true contender.

RIGHT OUT OF THE GATE

There is a distinct and rewarding whiff of quality to Sniper Elite VR from the moment it loads. Good, crisp, and well-designed menus make it quite clear that the developers have taken things seriously. A huge selection of comfort and movement options are offered, simply and cleverly streamlined for those who want to dive quickly into the game. If, like me, you’re a natural tinkerer with game settings, rest assured you’re well catered for here. It’s an immediate and all too rare indicator of the quality and care infused in the game, and it gets better from there.

A few button presses and the game loads, and we’re presented with a scene of the rural idyll; a stone-built cottage in the Italian countryside and a young family playing in the sun. The player is the narrator, an old man watching younger generations play happily away as he reminisces about the second world war, and his reasons for fighting. It manages to not be too mawkish, and the unusual perspective of a Partisan rather than a square-jawed American Blast Hard Cheese-type is refreshing. It also, thankfully, doesn’t dawdle too long on this old fellow talking. This framing device works well for narrative context but doesn’t outstay its welcome. He’s an old chap sat on a bench briefly reminiscing, and his ‘diary’ acts as the menu hub and mission selector for the game. There are a couple of levels that act as tutorials for the rest of the game, which is all told in flashback. It works really well, and you’re only ever a few seconds away from being in the heart of the action.

The first thing to strike you about the game is how lovely it looks. It isn’t going to stand in comparison to the latest Unreal Engine games on the current and next-gen consoles, of course, but we all know the Quest is basically a mobile phone with ideas above its station. As such, the fact that the visuals manage to actually impress is wonderful. It doesn’t feel like a creaky and antiquated engine that might fall apart at any minute; there’s good texture work, produced to the limitations of the hardware but beautifully realised nonetheless.

The architecture and panoramas actually look good. Explosions are convincing. Everything has a sense of weight, and it even borders on approaching realism at times. Yes, it never looks better than a really, really good PlayStation 2 game – but this is, in the murky new world of VR, still astonishing progress compared to what we usually get, and it makes such a difference.

The sniping, thank goodness, works excellently. It would hardly be in any kind of elite company if it didn’t. Aiming down the scope feels natural and just challenging enough; reloading and chambering ammo is the right balance of convincing and accessible. If you’re aware of Sniper Elite as a game series, then you’ll be aware that its USP is the Kill-Cam you get upon successfully sniping a Nazi shitbag. This is a gleeful and heady mix of medical textbook musculature, organs and over-the-top gore, showing skinless soldiers having various bits of themselves popped by your bullets. In VR, the first person view follows the bullet as it makes its way over to its target in a way that should be quite sick-making, but intelligent use of slow motion and vignetting means it’s just the right side of thrilling and rewarding. I have made my way through four Sniper Elite games, including this one, and it never really loses its appeal, causing both giggles and satisfaction.

The focus feature of the Sniper Elite games has been excellently implemented here. When the off-hand trigger is pressed while aiming, a small red diamond appears almost like a laser dot, slowing time and focusing ever more tightly on a distant target. After a few shots, it becomes second nature; after a few levels, it becomes a challenge to try snipe without it – one which the game even sets as an optional objective.

Other guns are well realised, and while it can often go against the grain for stealthy sniper types like yours truly to run-and-gun with an SMG or a shotgun, Sniper Elite VR is surprisingly encouraging and playable if you want to mix it up and play that way. Even in sections that find you trapped in a tower or other vantage point, it’s quite happy for you to drop grenades or fire bazookas at your targets rather than just stick to your sniper rifle, and that’s refreshing. I’m sure some people might find the point and aim system for throwing a grenade a bit simplistic for VR, but in actuality, it makes actually using them in the heat of battle a bit more practical, predictable and rewarding. The handguns such as the Luger feel a bit too Robocop, but at least they pack a punch. And as for the stealthy Welrod pistol… It’s lovely for the occasional short-range headshot, but its authentically woeful inaccuracy at any kind of distance can lead to much frustration.

I was worried in the opening levels that some of the finer points of Sniper Elite might have been lost in translation. The most recent iterations of the flat games in the series have featured sprawling levels with multiple vantage points and approaches and large dollops of stealth. Given the technical limitations of the Quest specifically and VR in general, Sniper Elite VR does well to try and consolidate this experience. Levels might be smaller overall, often divided into a couple of levels per mission, but the first time that the game cuts you loose to try to take out soldiers as silently and efficiently as possible as you explore, it’s still quite a thrill. The game is impressively sizeable for a VR title. The locations take in a variety of pleasingly familiar locales, which convey the WWII setting as well as you might hope. Beseiged Italian villages, fuel depots, cliffside gun ranges… It’s all rather excellent, and the 18 levels present various challenges for most skill levels.

There are several ways the game encourages replaying levels; there are optional objectives to complete, ranging from time-based challenges to using specific weapons or other methods of murder a certain number of times. All the weapons have specific challenges attached to them, all of which are niftily displayed when you hold them up in profile. You might find yourself getting obsessed with getting 20 heart shots with your rifle, for example. There are also collectables scattered through the levels, although disappointingly, the letters you can pick up don’t seem to have any readable content this time around, which feels like a bit of a placeholder and a rare example of the game not being as fully fleshed out as its forebears. Nevertheless, there are a lot of things to do as you make your way through the levels, and it should keep you occupied (or perhaps fighting occupation?) for a long time.

BAD FOR YOUR STEALTH

So what’s the catch, Doc? Surely Sniper Elite VR can’t get it all right? Well, you know, astonishingly, it comes very close. The stealth is a little dated and unpredictable – a criticism which might also be levelled at the flat games in the series. It’s not bad by any means and is still far more polished and rewarding than, say, Espire 1: VR Operative. But there’s an unpredictability to the AI soldiers, which can lead to some gnashing of teeth; sometimes they can blunder about confused after finding a body or hearing shots fired, and sometimes they run in weird directions. If you learn the patterns and foibles of how the soldiers act, which is what I guess you need to do, then it’s possible to not just fluke your way through. But there’s no tagging of enemies or x-ray vision or anything like that, and sometimes it feels like the game hasn’t really played fair. Other times it’ll just put a soldier facing the other way, oblivious to you and just in the right position for a headshot, and you forgive it. Just be aware that if you want some sort of alternative to Hitman, none of the Sniper Elite games is that, especially this one.

I’ve flagged a few niggles during my time with the preview build of Sniper Elite VR that the developers have assured us will be addressed in a Day One patch. If they show up for you, let us know; games can always be re-reviewed, for better or worse. At present, the gun belt/holster affair is wonky and confusing, but they’re sorting it. The game can often decide to put the menus elsewhere other than where you’re looking. Again, this is being patched, but a long press of the Oculus button to reset your view – or turning around a bit – should sort it. One slight annoyance (and it doesn’t seem to be on the patch list) is that expecting players to find keys for padlocks in a post-GoldenEye world seems massively redundant – especially as there are no animations at all for the act of unlocking said locks. Let us shoot them off, or at least turn the key if we have to! It seems a minor complaint in the grand scheme of things, but that is my metier.

THE BEST OF THE BEST

It gives me a tremendous amount of pleasure to recommend Sniper Elite VR wholeheartedly. As a fan of the series generally, I was hoping it would be good, but that it serves as an exemplar of a Quest FPS is just a joy to me. It’s not only an unusually well-wrought and finely honed title but there are also some things it even does better than its flat siblings; the story and main character, for example, actually manage to seem vaguely interesting. It’s full of excellent design choices and has an uncompromising level of quality that is simply too rare for a Quest-based shooter.

Without a doubt, Sniper Elite VR represents a new high bar for the genre on Oculus’ standalone headset. Generously, it’s even a cross-buy title on the Oculus Store, so those who use PCVR can buy this version and play that version for free. A class act, for sure.