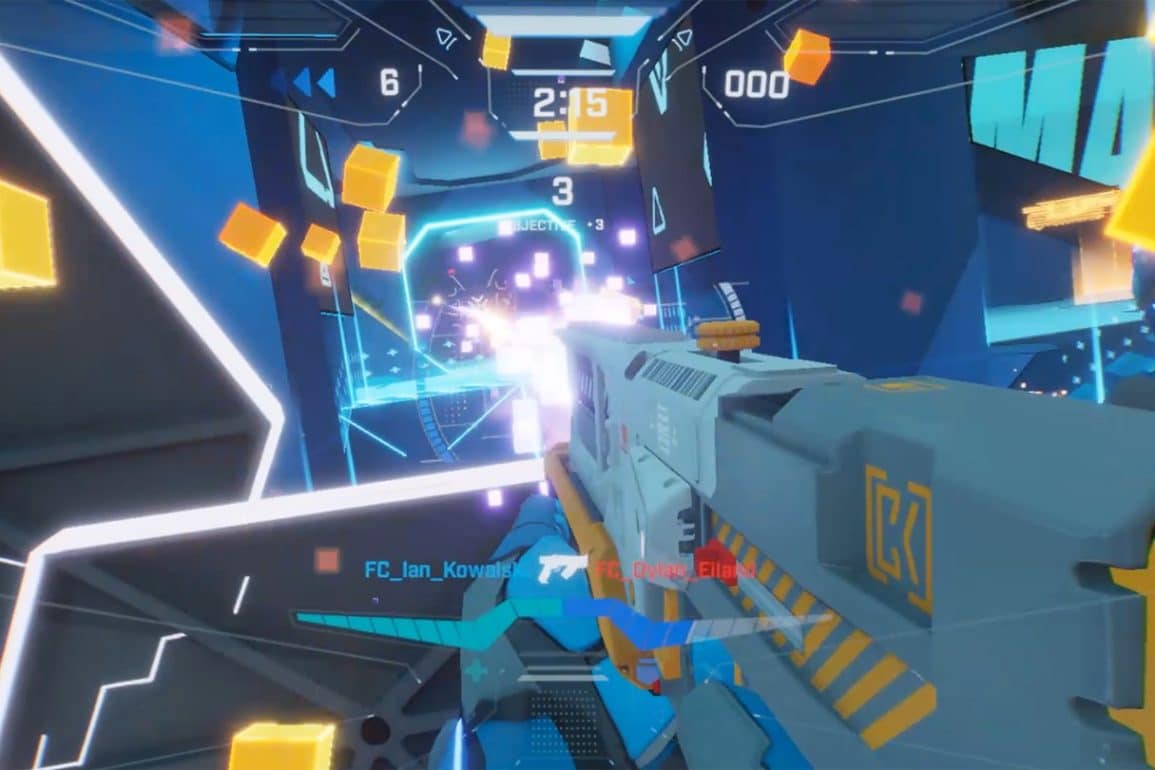 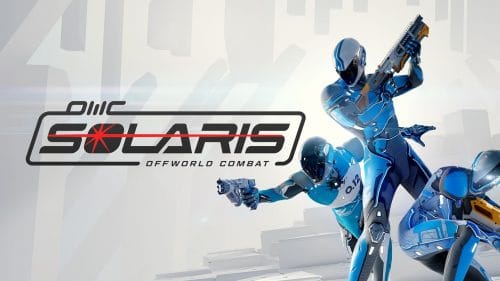 For those unfamiliar with it, Solaris Offworld Combat is touted as a fast-paced, arcade-style multiplayer shooter. You and 3 teammates pilot virtual combat suits, called Athlons, in the world’s premier combat sport hosted by the Solaris Offworld Broadcasting Network. This contest sees two teams (of four players each) battle to occupy a “Control Point,” which keeps shifting locations throughout the match.

All of this is backstory is gleaned from a single static text page, or “codex.” This absolute absence of pageantry and detail sets the tone perfectly as you’re transported into the world of Solaris Offworld Combat. This “codex” is followed by a lifeless splash page showing you the basic control scheme. Once you’ve skipped that, you have officially seen 100% of the non-game components that Solaris has to offer.

What the Hell am I doing here?

The key to a great VR game is to make it both intuitive and immersive. First Contact Entertainment obviously believe that they have succeeded in this task so efficiently that they don’t even need to give you a tutorial. No chance to test out those controls or refine your aim, no bots to sharpen your skills against. Nothing. Just two pages of dialogue, and you’re thrust into the action. But don’t worry, I’m sure you’ll be fine.

It is a testament to a games’ design priorities when the tutorial is delivered by the random folk you shared your first round with and not by the game itself. It’s just as telling when you see that moment repeated almost every round for the benefit of newly confused initiates entering the arena.

It wasn’t me, it was the one-armed man!

Once you don your helmet and enter the game, things, unfortunately, do not improve. The first thing that any player will notice is that your off-hand is a pointless mass of pixels that may as well not be there. While operating within the usual range of motion required for aiming, the off-hand automatically locks to the front of the gun. This forces you to either follow suit in real life or completely give up on the notion of having an immersive experience.

Even worse is the fact that, when you move your gun hand outside of that “normal” range of motion, your arm just floats there. It looks awkwardly disembodied and shows no correlation to what your actual hand is doing. At some points, it even floats off, desperately trying to reconnect with the gun as if dragged by some ghostly digital umbilical cord, to the point where your shoulder drifts into your face and obscures your field of view.

This is clearly intended to accommodate the multitudes of PSVR players that the developers are targeting and is obviously a design choice made specifically with the AIM Controllers in mind. Nonetheless, as a Quest user, the end result is just jarring and unwieldy.

Once the surprise of the phantom left hand is behind, it’s time to set off into the action, and in fairness, Solaris Offworld Combat does have that in spades. The game is fast-paced, and once you get into the swing of things, it can be quite intense. The basic setup allows for a decent amount of teamwork, with just enough space for acts of individual bravado that let you live out those SciFi action movie fantasies in style.

Despite my criticisms of the game, I eventually found myself having fun. The action is relatively lite, keeping true to its arcade roots and doesn’t call for too much tactical thinking. The maps are far from huge, which means that whenever you die (which will happen a LOT), your respawn point should never take you too far away from the action.

There’s a theoretically cool slide technique that makes you feel like some kind of unstoppable cyber God – until you realize that you can’t shoot while sliding. More than once, I tried to heroically slide around a corner, guns blazing, only to be mercilessly cut down while my weapons decided that mixing shooting and sliding was akin to mixing running and scissors.

Graphically the game is hardly a showstopper, but the arenas are crisp (if lacking in detail) and do the job adequately. There is a consistency to the level design, which regrettably translates to them all being very similar. Despite having cool names like “Fury 451” and “Vortex Prime,” they all just look the same. The graphical choices work best when the action is inside. The outside areas are generally uninspired, with the sky looking unimpressively flat. The good news is that you will barely have time to notice that, as even a moment of distracted stargazing is likely to get you shot.

Similarly, the sound design is adequate, with basic spatial audio that leads you towards the action and a soundtrack that has the decency to fade into the background so that you can focus on the relentless “pew pew” that will become your lifeblood while within the arena.

At launch, Solaris Offworld Combat offers only the aforementioned single game mode, effectively equating to a ‘capture the flag’ scenario. There are only 4 gun types, a handful of auxiliary weapons, and a limited array of maps (3 maps in total, each with a “Major” and “Minor” version). As such, the fun began to wear thin quite quickly. While the devs have stated that there is additional content on the horizon, the simple fact is that, at launch, Solaris Offworld Combat is shockingly absent the content and features that seem to be a prerequisite for the modern online FPS.

In a world where you are only a sideload away from brilliant games like Hyper Dash, Contractors, and Pavlov: Shack – there really isn’t any excuse for such a feature-poor entry. Comparatively, even the dubious Onward seems like a polished and accomplished contender when compared to this.

The Quest’s ecosystem has long maintained a walled garden approach to curation. The promise was that there would be no “Early Access” experiments. That every game that makes it to the official storefront would be polished and complete. Make no mistake, in the case of Solaris Offworld Combat, “Pre-Season” is just a fancy way of saying early access.

There’s no lobby in the game, so while you’re waiting for a match, you are literally left staring into the darkness. This process can occasionally stretch on for many minutes. To make matters worse, you might then get kicked back out to the title screen if no match can be found.

There is a notable absence of any social features, with no ability to party up, add or invite friends, or exert any control whatsoever over who you are playing with. Similarly, there is no way to see who’s talking at any given point, which I guess is fine since there’s also no way to mute or block other players anyway! On more than one occasion, this forced me to just sit and wallow in the deafening throng of pre-pubescence.

Matchmaking is another area that lets the game down. Sadly, I think this has more to do with a meagre player count than a particular lack in algorithmic prowess. The system automatically puts you into a rematch after each game. This means that if you suffer a loss at the hands of a clearly more skilled group, you have to exit the game and start again in the hope of getting a more favourable matchup. I tried this repeatedly, but I kept getting dropped back into the same group due to the low player count, only to be annihilated once again. Fun!

In time, I have no doubt that First Contact Entertainment will take the time to complete this game, adding in the additional maps, modes, and social features needed to bring it in line with today’s standards. However, as it stands today, Solaris Offworld Combat is an ambitious but unfinished attempt to bridge the gap between Quest, PCVR, and PSVR users, and unite gamers with easily accessible gameplay.

Solaris Offworld Combat
TLDR : Summary
Solaris Offworld Combat gives you fun, fast-paced action in an unfinished and graceless package. Buying this game now is effectively paying for the chance to beta test a game that is nowhere near finished. Save yourself the hassle and go play Hyper Dash instead.
Concept
5
Gameplay
6.5
Graphics
6
Audio
6
Longevity
3.5
User Rating0 Votes
0
Pros
Fast Paced Action
Cons
No social features
No bots or single-player mode
Some design choices break immersion
5.5
Unfinished
Get it on the Oculus Store
Solaris Offworld Combat