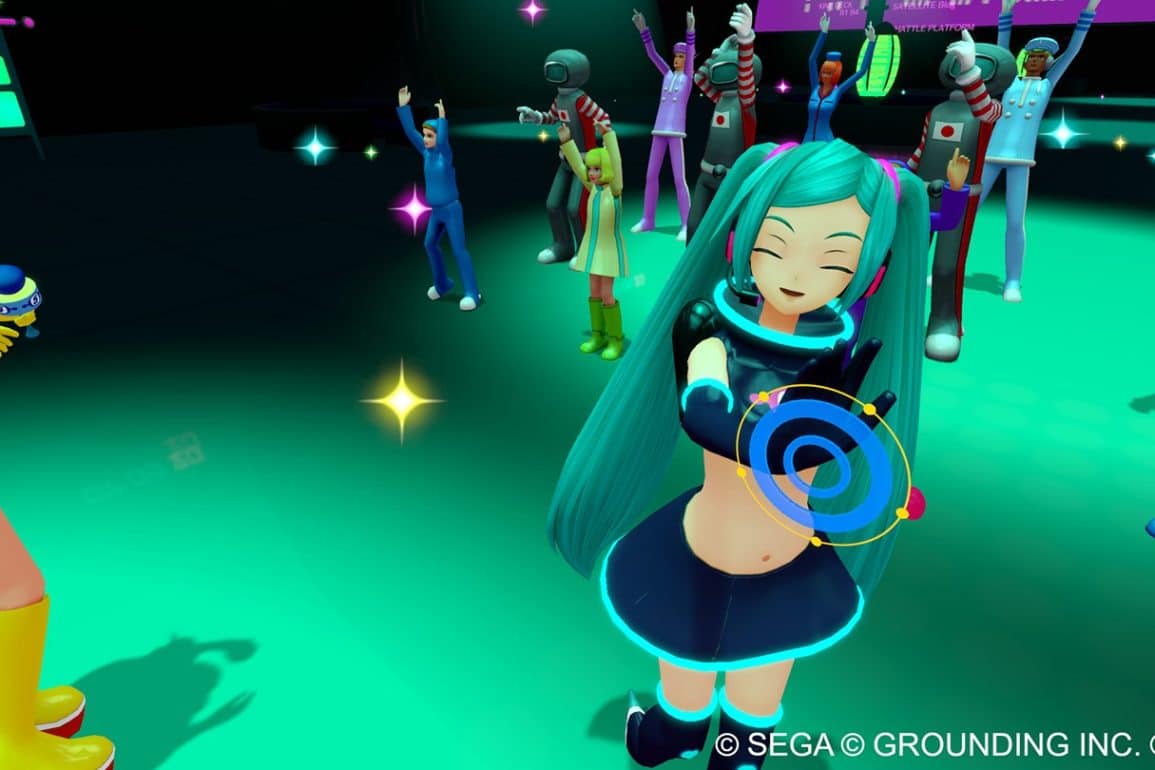 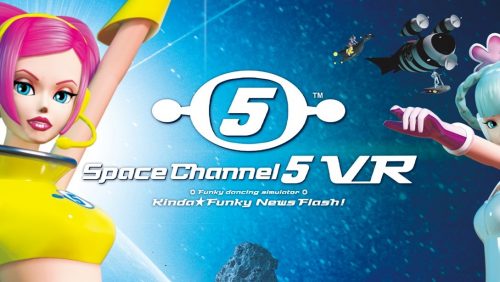 Space Channel 5: Kinda Funky News Flash! is the VR reimagining of the classic 1999 Dreamcast rhythm game of the same name. It casts you as a fledgeling reporter who uses the power of dance to protect Earth from an alien invasion. Set your nostalgia to stun and dust off your dancing shoes, because this newsflash is definitely a bit funky.

JOURNALISM AS PERFORMED BY BEES

You begin the game as the newest recruit to Space Channel 5 and are taken under the wing of a veteran reporter, Ulala, who shows you the ropes of dance-based journalism. No sooner has she started putting you through a series of basic moves when you are interrupted by Breaking News! Aliens have invaded the planet and are holding people hostage! Only you and your intrepid co-reporter can get to the bottom of this by “investigating the only way we know how!” – Cue dance break.

This storyline will see you face four levels of increasingly nonchalant shuffling as you try to stop the evil(ish) Morolians from stealing all of Earths “Groove Moxy”. You’ll also find yourself inadvertently rescuing a previously unmentioned space princess. Cool.

Along the way, you will meet new characters whose appearance, dialogue and relevance to the main plot will leave you scratching your head in confusion. But don’t worry about any of that, you’re here to dance!

In the simplest of terms, Space Channel 5 has not come to revolutionise the way you view dance rhythm games in VR. In fact, Space Channel 5 has not come to revolutionise anything at all. The evil space meanies will perform a series of moves in sequence, which you will then have to mirror back in time with the beat. This core loop will make up 100% of your game time. The excellent Dance Central has you cutting shapes and busting moves which actually have roots in modern street dance. Space Channel 5, however, will have you feeling like you’re doing the dance equivalent of karaoke to John Travolta’s seminal routine in Saturday Night Fever. The challenge doesn’t come in the form of carrying out particularly difficult moves but in the ability to memorise and repeat increasingly complicated strings of simple ones.

The actual dancing itself has more in common with another outstanding rhythm game, OhShape, than it does with more traditional dance games. The actions required to perform a successful move just involve hitting a pose in time, with no noticeable scoring on how well you follow the form of the movement. As long as you are in the appropriate finishing position when the beat hits, you get the points. While this is fine for OhShape, it’s lamentable that Space Channel 5 lacks any sense that you’re actually dancing.

WHERE DID THEY COME FROM?

Once you start the game, you are issued with your first “costume”, complete with full-body IK, and it is apparent early on that I (a 40-year-old man) am not the target audience for this game. The arms, at full extension, feel like they stop just passed the wrist, and the IK comes complete with breasts that seem to grow directly out of your chin. I’m aware that the game targets a much younger, and therefore physically smaller audience. Still, for anyone above 4’5,” this all creates a strange disconnect with your character.

Graphically, Space Channel 5 is bright and vibrant but lacks any level of depth or polish that one might expect from a VR game in 2020. The character animations are appallingly stilted for a game which centres itself around rhythm. The dancers demonstrate all the fluidity and grace of a toddler whos lower half is made of Lego. In fact, the dance animations all look worse than the Dreamcast original and remind me of the animations from the earliest version of The Sims.

This lack of visual refinement is made even starker as the characters offer no connection to the world in which they reside. No shadows or textures of any sort exist to ground them. As a result, all the dancers just seem to float at floor level. They look like they have been copy/pasted in place as part of some rushed college animation project rather than as part of a polished Quest title.

The sound in Space Channel 5 is the comparative highlight of the game, although that’s really not saying much. The music is the type of aimlessly catchy computer game music from the late 90’s that while not offensive, is really not good enough to carry a rhythm game. If you had any thoughts of finding a favourite song to jam out to, you might want to put that notion aside quickly.

Each level consists of a single track that changes tempo according to which part of the level you reach, but there is nothing as refined as a song select. The sound effects are a bog-standard, low effort affair. They seem to have been recycled directly from the original for the sake of nostalgia. Outside of a few little chimes and tinkles that tell you that you’ve completed the moves correctly, there’s really not much else going on. The menu music sounds like you’re trapped in some kind of hellish theme park hotel elevator. The menu sounds are the sort of thing you’d expect to hear coming out a futuristic Japanese toilet. The same can be said for the voice acting.

IN SPACE, NO ONE CAN HEAR YOU SCREAM

When it comes to content, Space Channel 5 is just as maddeningly empty as it is in every other metric. There is the Story Mode, which consists of four levels that I completed on the first run in 30 minutes. Once completed, these can then be selected individually should you be masochistic enough to wish to play them again.

There is also an Arcade Mode; however, this just appears to be the same four levels without the ability to lose. There is even an alternate arcade mode which features identical gameplay but is presented by a Japanese speaking host and what appears to be a group of dancing Oompa Loompa’s. Unfortunately (or perhaps fortunately) this is just a single level.

There is also a Trial Dance mode which consists of the “100 Dance Battle”. Quell that rising excitement. This mode is essentially just ten levels, each of which introduces an even more annoying pose to perform on repeat for two minutes. Whilst “100 Dance Battle” sounds promising, I was able to beat it in twelve minutes, and two of those minutes were spent screaming into the void. Thankfully, I finished this mode just before I lost the will to live.

Other content-stretching features include a dressing room (that allows you to select from thirteen different pre-made outfits), a “Friend-o-pedia” (which gives you short and pointless biographies of all the various background characters), and a calorie counter. Other than that, there’s nothing. No difficulty settings, no variant game modes, no ability to skip through the endless dialogue. Nothing. I was able to complete everything that this game offers twice in just over ninety minutes!

Despite being a BIG fan of rhythm games in VR, I really got the feeling that I am not the intended target market for this game. In the spirit of fairness, I handed my Quest to my daughter and two of her friends to gain a different viewpoint. For reference, the girls are all slightly under the recommended age for VR. As they had no previous VR experience, I let them play Beat Saber and Dance Central first and then had them play Space Channel 5.

At the end of the round, I asked the girls if they wanted to play Space Channel 5 again. Two out of three said, and I quote, “No, that was silly.” One of the group, however, enthusiastically decried (and again, I quote) “9 out of 10! Best game ever!” and demanded another turn. The first two just wanted to play some more Beat Saber…

So, based on this highly scientific audience segmentation exercise, the gameplay score gains one additional point. If you happen to be buying the game for a younger child, there is at least some [based on the rigorous science, I’d say it’s a 33.33% – Ed.] chance that it won’t be a complete waste of time.

Space Channel 5: Kinda Funky News Flash! feels out of place in the Quest library. It contributes very little to an already crowded genre and yet manages to somehow underachieve in every conceivable way. From lazy graphics to boring dance moves and an aggravating plotline, Space Channel 5 manages to stand out only by just how bad it is. Unless you happen to be a massive fan of the original game who is willing to shell out £19 on nostalgia alone, then I would stay well clear of this one. With an array of incredible rhythm games out there, you’d be much better off playing Dance Central or Synth Riders if you really want to feel like a real groove master.

Space Channel 5: Kinda Funky News Flash!
TLDR : Summary
Space Channel 5: Kinda Funky News Flash! feels like a 20-year-old console game that was just dumped unceremoniously into VR with little to no real effort at all. The only thing here that is worth recommending is that you try any other game instead.
Concept
3
Gameplay
2
Graphics
4
Audio
5
Longevity
1
User Rating0 Votes
0
Pros
Loads without crashing
Probably hasn't given me cancer
Cons
Boring, repetitive gameplay
Annoying story
3
Appalling
Get it on the Oculus Store
Space Channel 5