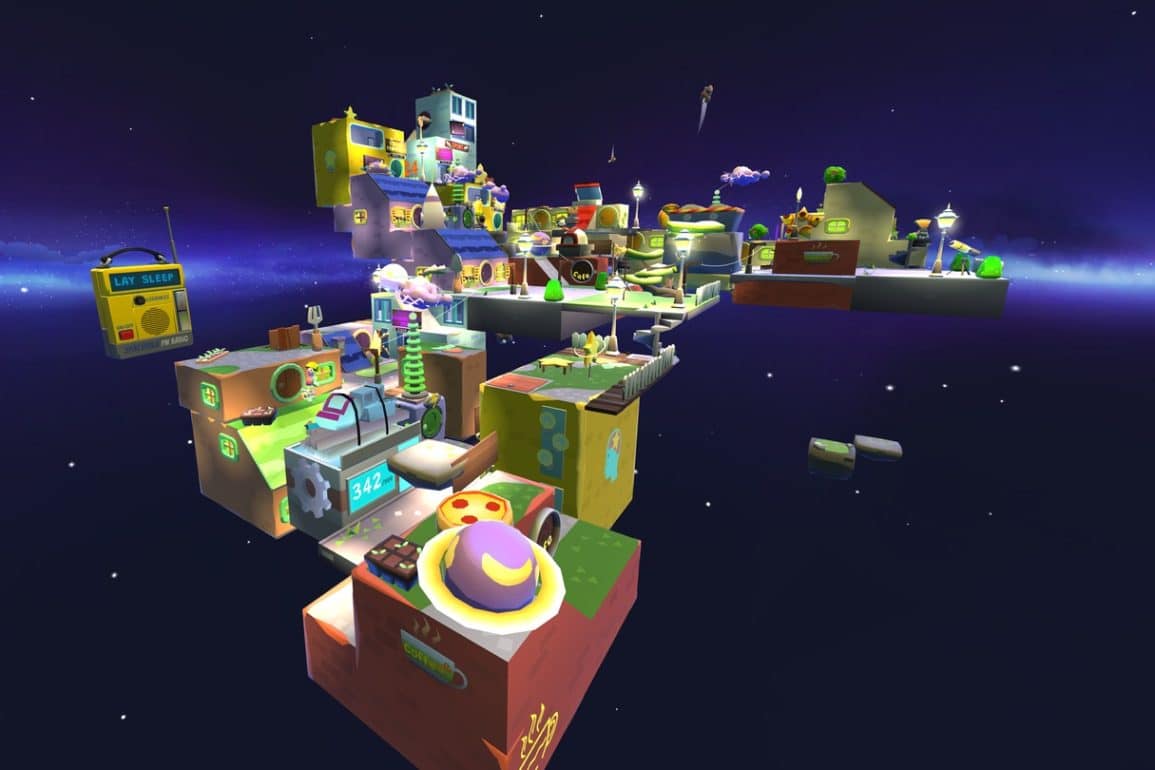 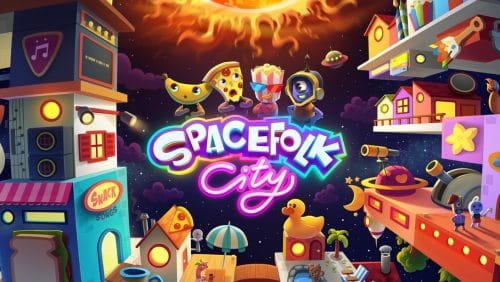 Spacefolk City is a game that I had no idea that I needed in my life until I played it. To be honest, I had no idea Spacefolk City existed until the day before it launched, and I doubt that the rest of the team had heard of it at all. In fact, when I bought the game, I was just killing time and had absolutely no intention of reviewing it.

My plan was to play it for a few minutes, then move on to the big-name IP title that I’m actually supposed to be reviewing. The only thing is, I booted up the game, played for a little and then took my headset off only to discover that 2 hours had disappeared in the blink of an eye. Then I went to bed and literally dreamed of tiny space dudes pottering about, building oddly vertical cities in the void of space.

The next morning I informed our glorious leader that I would be reviewing Spacefolk City next, and here we are…

RESTAURANT AT THE END OF THE UNIVERSE

Spacefolk City is a fair approximation of the love child that would be born if The Sims and Sim City had a 3 way with a Gummy Bear on acid.

In the simplest terms, Spacefolk City is a City builder designed from the ground up for VR. You will need to harvest resources, build structures and monitor your populations’ happiness to progress. Each individual citizen who resides within your floating city will have their own requirements for happiness will bring their personal skills to the community. It is up to you to use these skills, assigning them tasks and ultimately nurturing your enchanting little space goobers into fulfilling little lives. Doing so will, of course, earn you the requisite Happiness points required to unlock new building types and expand your population.

Each city section is built around a power station, which gives off a cube-shaped radius of energy that sustains your city. Place a building anywhere within that cube, and as long as it has a direct path to the power station, then you’re ready to go. Most buildings have multiple entry points and can be effectively positioned sideways or upside down to fit into your cube. Once you see that possibility, not only do you have a whimsical city builder, but you have the basic elements of spatial puzzler like Cubism as well. This subtle combination of mechanics and the fact that your attention is constantly shifting gently from one task group to another is ultimately responsible for how addictive Spacefolk becomes.

WE BUILT THIS CITY ON ROCKS THAT ROLL

Moon Mode have delivered some really well thought out mechanics to make the gameplay in Spacefolk City intuitive, almost to the point of becoming subconscious.

Like all city builders, you must constantly farm resources, but unlike pancake iterations of the genre, Spacefolk has a much more VR centred approach. Asteroids containing Scrap, the sole building material required to see your city to fruition, will hurtle past you from all angles. Simply reach out and grab one, pull it apart and voila! You have your resources. There are, of course, ways of upscaling your production, but the very concept of having your resource harvesting come down to physical activity is an excellent move for immersing you in the VR-ishness of the game. These activities mean that, despite being a low impact game, Spacefolk City always keeps you busy.

Even the process of manoeuvring around the city is a masterclass in effortless virtual manipulation akin to Demeo and something that the developer of Eternal Starlight should really take note of. Moving through the space and rotating the viewpoint are such intuitive processes that within minutes you will take for granted how much work probably went into making everything so smooth.

In fact, every game component works exactly as it should, which is a testament to how much attention to detail was put into Spacefolk City. Cities can often become quite busy, cluttered with any number of moveable pieces and cosmic minions, yet grabbing precisely what you want from amidst the chaos is blissfully easy. This attribute is at the epicentre of what makes Spacefolk so sticky. Well thought out, well-executed basics can often go a lot further than flashy graphics and a shit tonne of explosions.

Like most good things, Spacefolk could always be better, but at this point, I’m asking for extras rather than pointing out flaws. Given the quirky nature of the game and the potential for the zero-G shenanigans that working in space offers, I’m disappointed that we can’t invert the city and build on the underside as well. This would have added so much more depth to an already deep gameplay loop that I occasionally get lost thinking about the MC Escher-esque metropolis in my head. Perhaps a future DLC, Moon mode? Please?

WHY IS MY DUDE AN AVOCADO?

The graphics aren’t the standout feature of Spacefolk City, but they are very nice. The art direction is really great, giving the game character from top to bottom in a way that is accessible and charming right from the off. It’s brightly cute and flamboyantly zany and is ideally suited to the style of game on offer. Right down to the strangely engaging avocado dweebs, everything here has its place within the game’s character. That character, my friends, is what Spacefolk is all about.

This is never more evident than in the sound design, and honestly, I think this is a standout component of the game. Walking the fine line between background ambience that fades into ignominy and more purposeful tunes that risk becoming repetitive or intrusive is no easy feat in low-impact genres such as the city builder. Spacefolk City treads this line artfully, and it’s a pleasure to play through the soundscapes that developers Moon Mode have created. They are playful, silly yet musically grounded excerpts that seldom become intrusive. After 5 hours in the game, they have yet to become even vaguely annoying. Could there be more tracks to mix things up a little? Well, yes, of course, there could. Could they be any better suited to the style, feel and character of the game? I highly doubt it.

Spacefolk City will definitely not be a game for everyone. In fact, Spacefolk City might not even be a game for a considerable number of people. But, in an ecosystem populated by riffs on the same theme, iterated over and over again, playing through Spacefolk City felt like an absolute breath of fresh air. As relaxing as it is engaging, Spacefolk City offers a chance to slow down find small pockets of zen amidst the sensory overload of an FPS soaked ecosystem.

With about six hours’ worth of campaign levels and a Sandbox that offers the faithful a virtually endless loop of spaced-out happiness, Spacefolk City is a true testament to the importance of simple, but well-delivered basics, developed with VR at their heart. It also shows the value of wrapping all those things with a cohesive sense of character, leaving those less cynical players smiling for almost no discernible reason.

Spacefolk City
TLDR : Summary
Spacefolk City has come out of nowhere to offer the Quest its first city building experience, lovingly wrapped within an endearingly playful character. It is a subtle, nuanced and enchanting experience that showcases the importance of getting the basics right.
Concept
8
Gameplay
8
Graphics
7.5
Audio
8.5
Longevity
8
Pros
Flamboyantly cute sense of character
Excellent soundtrack that builds and blends
Addictive yet relaxing gameplay loop
Great interpretation of classical pancake mechanics to accentuate VR
Cons
3D Spatial puzzle elements could be more prominent
Could be more diversity to building types
Would benefit from more complex challenges
8
Wonderful
Get it on the Oculus Store
Spacefolk City