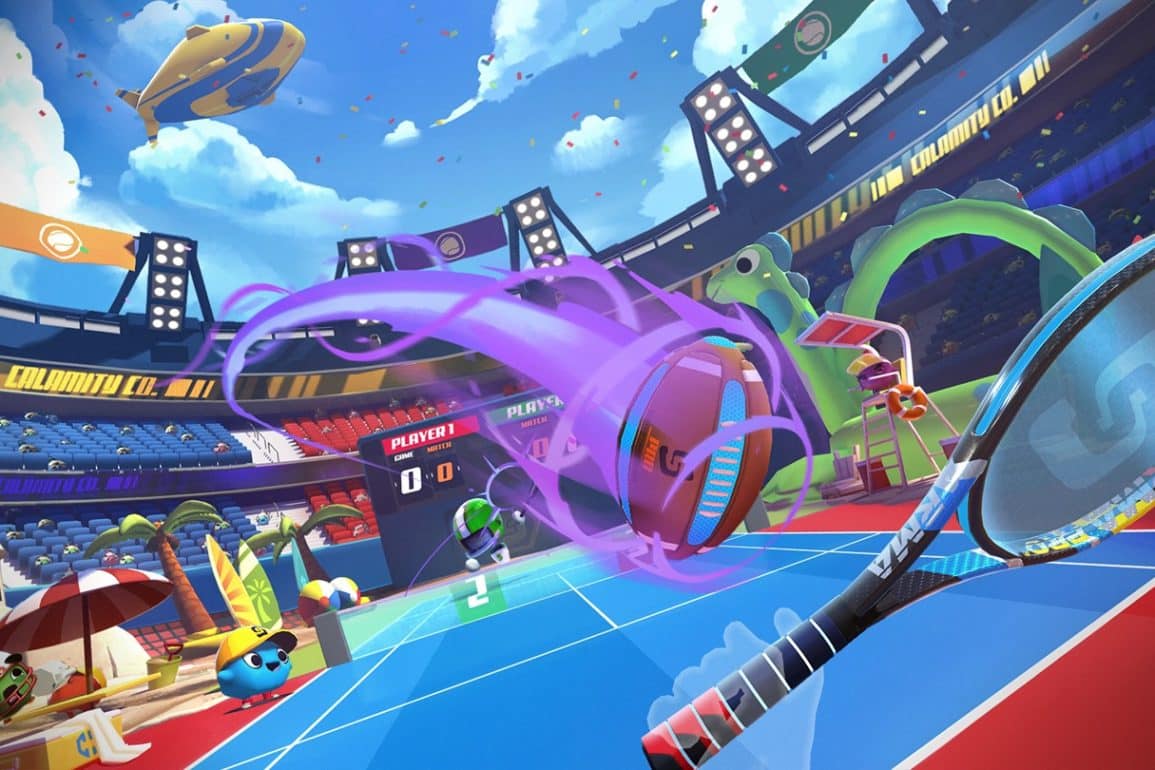 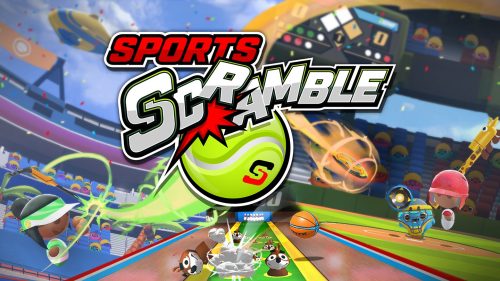 It’s easy to put on Sports Scramble and immediately think of the late, one-time great, Wii Sports. They have a few elements in common; they’re playful, colorful, and somewhat simplistic. The real problem with Wii Sports is that it launched when the Wii was en vogue, and the notion of being able to play physically was revolutionary. It only took a few weeks for the novelty to wear off, however. The magic wore off as soon as we realized that the Wii’s ability to accurately sense motion was, to be generous, abysmal.

When it comes to gameplay, Sports Scramble isn’t like Wii Sports at all. The Quest may not be perfect, but it does track beautifully, and when Sports Scramble chooses to simplify motions, it does so out of choice, not out of necessity.

Sports Scramble gives you three sports; Tennis, Bowling, and Baseball, but, as the title indicates – it scrambles them. You may start what appears to be a regular game of tennis, but things change. Hexagonal modifiers appear over the net, and when the ball goes through them, whacky things happen. Some modifiers change your racket, and some transform the ball itself. It’s not uncommon to find yourself trying to lob a beach ball over the net armed only with a fish. The same essential formula applies through the sports on offer. It’s a novel approach to sports games, and it’s entertaining.

Sports Scramble is all about keeping it lighthearted, however, and it is a sports-based game, not so much a sports simulator. The physics are very forgiving and generally work in your favor, especially with default settings. In tennis, for example, you mostly stand in place, and the computer opponent will diligently play the ball to your position so that you can play the game from a stationary position. I haven’t been able to try it myself, but I’ve been told that the game will autoscale to your guardian so that if you have a big enough space, it will take advantage of it. But in a regular setting, you’re mostly deciding whether to play front or backhand. You can do slices, and you can approximate lobs and, to a lesser extent, smashes. Sports Scramble isn’t trying to be Racket Fury or Eleven Table Tennis.

Baseball arguably makes things even easier, and in doing so, almost forgets that it’s a virtual reality game with nearly perfect motion tracking. When pitching, it’s not your hand motion that decides where the ball goes, but a little targeting bullseye that you move with your thumbstick. You can change that by going to the game’s main options menu and opting to play in Pro mode but it’s not something you’re explicitly told and I only found out about that option from a charitable soul called Chinigma on Reddit.

Pro mode, when activated, also makes Tennis far more challenging. If you’re interested in this as a sports title, you should immediately go to the options screens and make sure all sports are operating in Pro mode.

Most of these default-setting simplifications are clearly designed to make the game more accessible, but in doing so, they also make it initially appear far less challenging than it can be. The result is that, on a gameplay level, the game appears to target casual gamers. These choices aren’t necessarily bad, but they might initially dissuade some gamers who get an incomplete first impression.

Bowling, I have to say, is somewhat less forgiving, and is much more skill-based even on the default settings. To me, this made bowling far more satisfying when I first played than either Tennis or Baseball.

No matter which sport you’re playing, Sports Scramble doesn’t skimp on options. You can choose the difficulty level, and you can turn ‘scramble’ options on or off. So if you wanted a straight tennis game where the racket and ball never transform, you could do that. I got some good mileage out of playing bowling with ‘traditional’ settings on.

The graphics in Sports Scramble are excellent. The colors are bold, the settings are imaginative, and the animations are lovely. All the visuals in the game are polished to perfection, and the locations are fantastic. The game has a clearly defined aesthetic, and it shows it off at every opportunity. There are a lot of graphical flourishes, and the sound is perfect. The only problem I had was that the menus often wrapped around you. A 360-degree user interface seems innovative in VR but leads to situations where you’re waiting for something to happen only to realize that you’re facing the wrong way. The game tries to recognize this and often asks you to ‘face forward,’ but at least on one occasion, that prompt itself wasn’t in front of me!

Rhythm of the Universe – Ionia | Review

Apart from the regular game modes, there are several challenge stages that you can complete for every sport. The challenges act as mini single-player campaigns and will remind you of the arcade sports games you’ll find at your local Chuck E. Cheese.

Sports Scramble has achievements and trophies, but unfortunately, a poorly timed trophy notification momentarily blocked my view and cost me a point while playing tennis. I’m not sure I can blame Armature for that since this is how Oculus chooses to display notifications. God knows how many times I’ve had the ‘Headset Battery Low’ alert block my view in other games. Still, maybe it would be better to display such alerts after a round ends rather than immediately upon earning a trophy.

Sports Scramble does have online multiplayer, but I tried and failed, several times, to find any opponents to play online. It could be because of my time zone, but I’ve had no such issues with Racket: NX, for example.

Sports Scramble is a fun family game that’s good for casual gamers and fantastic for younger gamers. It’s incredibly polished, and the developers have painstakingly worked on the presentation. It has the level of cute polish that you’d expect to find in a Nintendo title, and that’s saying something.