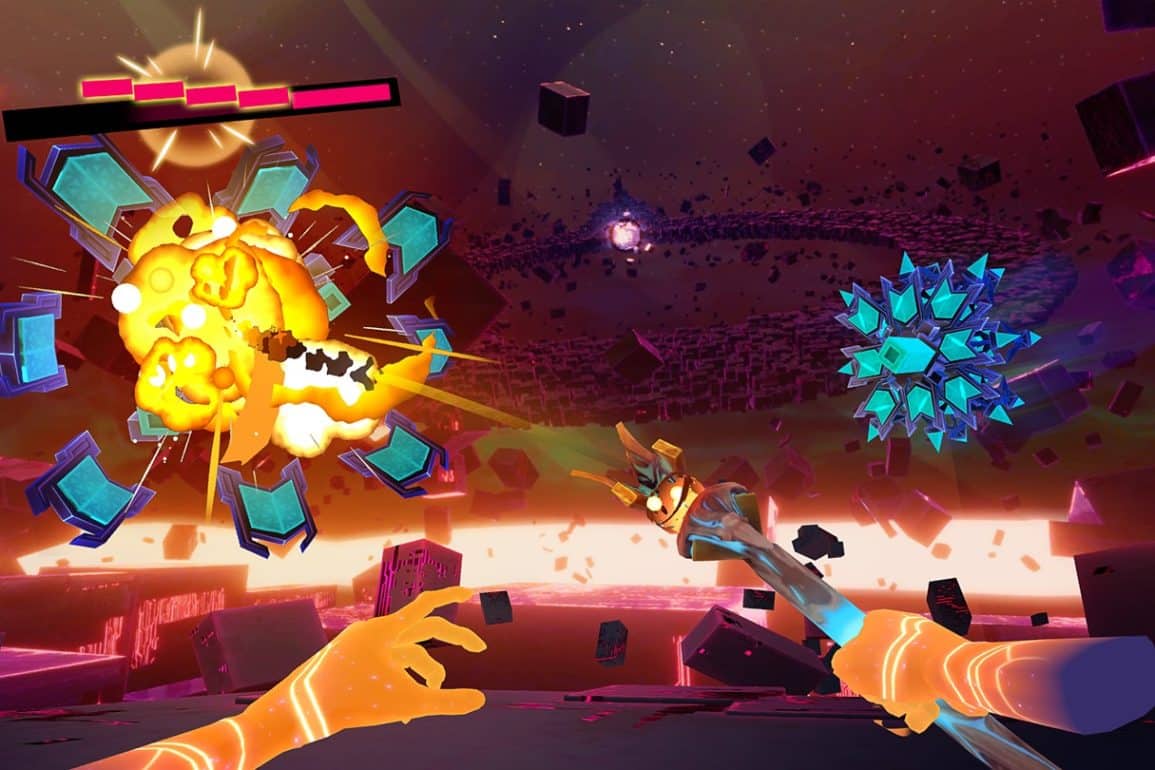 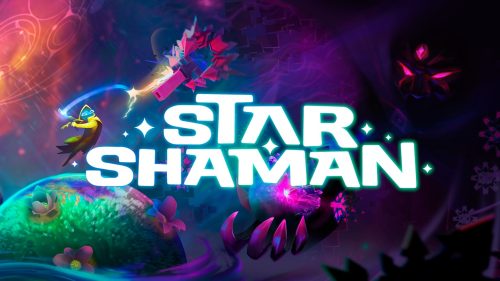 Star Shaman is the first outing from Indie developers Ikimasho. It promises an experience unlike any other in the Quest library. Using a unique gesture-based spell casting system, you will fight your way through spectacular looking galaxies to the beat of an exhilarating soundtrack. For you, dear player, are a mighty Star Shaman, a champion of biodiversity and the galaxy’s last resort!

Watch me pull a Disclaimer out of my hat

This is an odd review to write because I really want to give Star Shaman a better score than I’m going to. There are some really wonderful elements to this game, but one or two design decisions become so frustrating that they render the positive elements all but unplayable within a fairly short timeline.

The team at Ikimasho have said that they’re actively looking to address some of these concerns. To that end here’s a disclaimer: The review and scores given below are valid at the time of writing. However, as soon as the team deliver an updated version, I will happily revisit this piece and adjust accordingly. Star Shaman has so much more potential than it currently delivers upon and I sincerely hope to be raising this score shortly.

If you’ve seen the trailers for Star Shaman, you’d be forgiven for thinking that it’s yet another twist on the popular rhythm genre – this time incorporating gesture-based spell casting. Two of my all-time favourite games are Pistol Whip and The Unspoken. When I saw the mixed reality footage showing the player ducking, dancing, and blasting enemies in time with the beat, I thought that all my dreams had come true.

Star Shaman sees you take on the role of a mystical crusader battling to defeat the “Architects of Entropy” and thwart their attempts to homogenise life into static, geometric shapes. There is more to this story (lots more for those of you who have the patience to read on), but it is relatively limp and not in any way necessary to enjoy the game. I’m sure someone worked very hard on writing the endless splash screens of dialogue, but even from the perspective of reviewing the game, I found the story almost impossible to wade through.

At the end of the day, all you need know is this: The bad guys are all about geometry, and you are a wizard with a grudge against shapes.

Now get out there and FIGHT!

My Kingdom for a Sphere!

At its core, Star Shaman is, essentially, a roguelike wave shooter whose closest living relative is probably the uber-successful Space Pirate Trainer. Waves of bad guys present themselves directly ahead of you. They attack from a similarly elevated position and rain a barrage of attacks that you will need to either dodge or deflect with your magic shield. It’s a well-worn trope that could easily have run foul against the harsh geometry of mediocrity. Thankfully, this iteration comes with a twist, and for me at least, that twist is really cool.

Instead of something as pedestrian as a blaster, Star Shamans wield the Shaman Sphere, a magical blue ball that permanently hovers just in front of you. Within this sphere are crystals which allow you to summon your magic arsenal. Each weapon is brought forth by grabbing a crystal and tracing a gesture pattern that springs to life around the sphere. This proves to be an incredibly satisfying way of both drawing and reloading your weapon. Frankly, it’s one of the main reasons that you will want to continue to play the game.

In true roguelike fashion, you will permanently unlock increasingly powerful spells as you progress through each run. These can be accessed once per “System” (essentially just a cluster of levels) as you enter the Reliquary and choose from a randomly generated selection of spells. Your sphere can eventually hold a maximum of four offensive and three defensive spells with each category being assigned to a particular hand.

Once perfected, the gestures that switch between these spells feel almost like a choreographed dance and are incredibly fun to perform. Honestly, if you could just focus on this core gameplay loop and play the game uninterrupted, then the rest of this review would probably read very differently. Sadly, this is where the things take a turn for the worse and Star Shaman goes from being engaging and satisfying to just plain annoying.

For reasons that I find absolutely baffling, Ikimasho decided that at the beginning of every single run you need to play six brief levels, followed by one horrifically dull boss. Each of these levels takes about 30-50 seconds to complete, after which you have to bounce through level select and loading screens for the next twenty seconds. All up, finishing the first system takes about six minutes, and of that time, you spend at least two minutes in between rounds waiting to get back into the game. It is insane!

Add to this a difficulty curve that doesn’t make sense, and you have a recipe for disaster.

Now I’m hardly a Pro Gamer, but I’m not exactly terrible (I have at least two top 100 scores in Pistol Whip – yay me). It took more than four hours of play to reach the second boss. Between the first and second systems, the levels go from being 30-second doddles to 3-minute action montages where new enemies and attack patterns spring out of nowhere. You even find yourself being attacked from multiple directions simultaneously.

The early stages do nothing to prepare you for what lays ahead and instead become frustrating repetitions that drain the fun from the game before you even start. The subsequent stages are tantalisingly cool though, hinting at a fantastic core loop that would be so much fun if you could just bloody get to it!

This might sound like a petty gripe but let me put this into context mathematically. After four hours of playtime, I had spent a bit over two hours actually playing the first system levels, a bit under an hour getting slaughtered in the second system. A full hour was spent on the loading screens between the first six levels!

Little House on the Psychedelic Prairie

Space Shaman offers a visually pleasing aesthetic that is easy to lose oneself in. The character design on the support characters is artfully delivered in a vivid comic book style that is genuinely appealing, and the background worlds are fun and funky. It might not be groundbreaking, but everything fits together seamlessly, and I really enjoyed being immersed in the worlds that Star Shaman offers.

Disappointingly though, the character design on the enemies is a massive let down. Perhaps it is because everything else has been so well thought out and executed that this one element seems so stark in contrast. As such, it became a significant distraction. I mean, I understand that the Architects are all about geometry. Still, there could surely have been a better approach than making them faceless, floating masses of simple shapes.

Ignoring for a moment how little satisfaction is gained from blowing away a pesky orange hexagon, this approach makes recognising enemy types very difficult. Each enemy type has a distinct attack pattern and damage counter, but it’s difficult to remember which is which when the enemies are all so abstract. Is it the blue diamond with the red border or the red square with the blue border that needs to be shot three times? Never mind, I got hit while I was trying to remember and..now I have to start again?! Crap.

Back at the beginning, I mentioned that I initially thought that Star Shaman was a rhythm game, and while that’s not technically true, it does come close. Unlike real rhythm games, you are not required to interact with anything on the beat. However, this doesn’t mean that you can’t, and playing to the music becomes a significant part of the fun.

In terms of audio interactions, there is a notable similarity between this and the truly excellent Racket: NX, insofar as you don’t have to play to the rhythm, but it is sooooo much more fun if you do. The tracks will help you get your magical space groove on. While they’re probably not going to go straight to your Spotify playlist, they’re an excellent accompaniment to the gameplay. The soundtrack consists of various upbeat, funky house tracks that will have you grooving out of harm’s way and bopping away as you blast your way through the game.

Add to this the dance-like motions required as you summon your weapons and Star Shaman manages to incorporate the best elements of the rhythm genre. It does this without cluttering up the cognitive process with an insistence that the beat must be king. The ability to ignore the music and concentrate when you need to, coupled with the freedom to jam out when you’re really feeling it is one of the most well-conceptualised aspects of this not-quite-rhythm gem.

Star Shaman comes so very close to excellence that it’s heartbreaking. For the first release from an indie studio, it shows a tremendous amount of promise, and I genuinely think that the team at Ikimasho should be proud. The addition of an Endless mode that allows you to just get lost in the core loop or an Arcade mode that combines each system into a single playable level, would make this game an absolute winner.