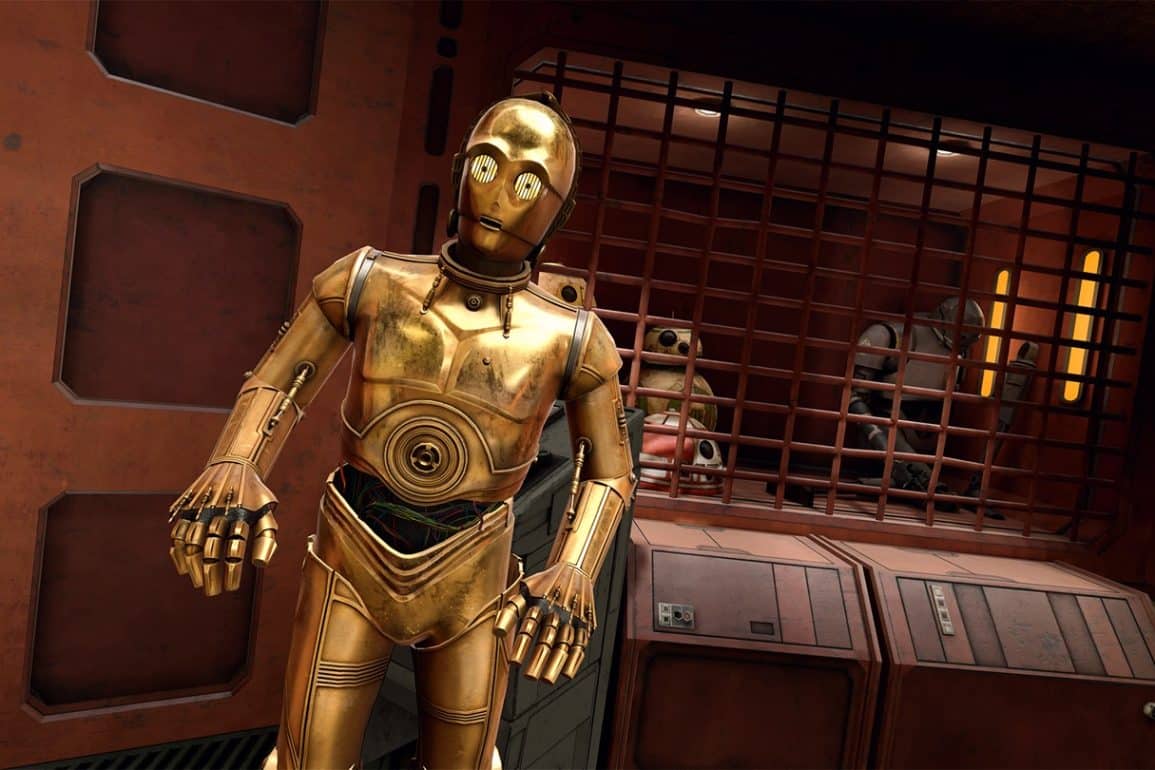 The Beloved Franchise Returns To Quest 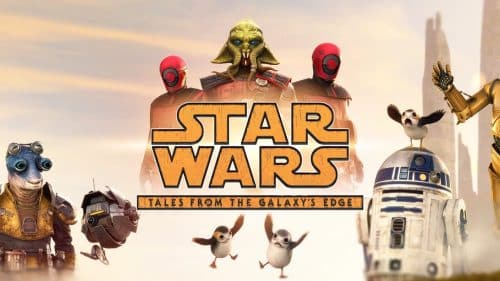 There are very few IP’s in the modern world that carry this much weight, so when Star Wars: Tales From the Galaxy’s Edge was announced there was unsurprisingly a lot of attention. Beloved by millions, new instalments into this universe are met with such intense scrutiny that they tend to become polarising. Well, love it or hate it, get ready for some heated discussions! ILMxLAB have just delivered the newest addition to the VR universe, Star Wars: Tales from the Galaxies Edge. Will it live up to the hype? The answers lie a long time ago, in a galaxy far, far away…

Star Wars: Tales from The Galaxy’s Edge offers a single-player, story-driven campaign. It sees the player take the role of a humble droid technician on a routine mission to deliver some cargo.

The game begins with a well-realised tutorial mission that allows the player to get to grips with the UI and basic mechanics while driving the story forward. During this section, you discover that your boss has some slightly less than legitimate cargo on board which you “are not smuggling, but probably not not smuggling“.

While attempting to offload the cargo, you come under attack from galactic space pirates known as the Guavian Death Squad. At this point, your mundane life as a mild-mannered droid repair guy is turned upside down.

In the interest of avoiding spoilers, I won’t reveal any other plot points. All I will say is that from here, you begin a relatively linear journey across three and a half decent-sized levels. During this adventure, you may or may not encounter some mainstay characters from the franchise along the way. If you’ve spoiled things for yourself a little by watching the trailers, this won’t be much of a surprise. The story is moved along through some charmingly written dialogue. Mid mission dialogue and action set pieces continue to motivate you within a storyline that adds up to a series of reasons to keep moving and shoot various bad guys.

THE FORCE IS WITH YOU. OH WAIT, NO IT’S NOT.

This time around ILMxLAB have decided to forgo the force-based elements of the Star Wars canon and deliver some slightly more grounded Sci-Fi fare. Gone are the Sabers and mystical powers of previous franchise instalments. Instead, Tales from The Galaxy’s Edge arms you with diverse blasters and thermal detonators that fans of the series have come to love almost as much. Additionally, the ability to use different types of Remote Droids (the floating spheres that were shooting you in the Lightsaber Dojos of the earlier ILMxLAB games) provides instantly recognisable Star Wars based combat mechanics.

There are four types of guns at your disposal. Although they all have much fancier names, they are effectively the Sci-Fi equivalents of a Semi-Automatic Pistol, Revolver, Shotgun, and Assault Rifle. Guns are readily available, so Ammo is not an issue. Each gun comes with a specific amount of charge and can easily be replaced when that is exhausted. You do still need to reload (or “vent”) the weapon by pulling back a catch, or using a pump-action for the shotgun, so you can’t just empty a gun and reach for the next one a la Robo Recall. It’s hardly Pavlov levels of realism, but it’s pretty satisfying.

The combat is reminiscent of cover-based shooters of old, and the landscape is conveniently littered with a mix of waist and shoulder height items that you can duck behind. Make no mistake, this is definitely how the game wants you to play it. Damage is taken relatively quickly, with 2-3 hits equating to death even on normal mode. Learn to use your environment or die trying.

The AI is decent, but not impressive. Enemies move from cover to cover to close in and surround you, and most of the environments allow for a verticality which adds to the challenge. Once I got the hang of their routines, it became easier to navigate combat. Still, at first, I found myself being ambushed or flanked while I was focusing my fire on a single target ahead of me. I genuinely enjoyed the sense of tension and heightened immersion that comes with always having to look over your shoulder.

The UI is a very polished, well-designed affair and makes navigating the inventory and menus a breeze. All the interactions seem designed to be immediately accessible for new players. I can imagine that for many people entering VR for the first time with their newly acquired Quests, this game is going to be mind-blowing.

Guns can be holstered by the hips, health packs clipped to the forearm, and the storage pouch and ever-useful multi-tool self-adhere to the player’s chest when not in use. You even have a full torso IK which you can adjust to be precisely positioned. My only complaint with this system is the lamentable lack of a shoulder holster. I wanted to be able to store a third weapon, but I also think that reaching over your shoulder to draw a gun is one of VR’s most intrinsically satisfying gestures. It’s also a VR gesture that could have nicely rounded off the experience for newer VR users.

There’s a decent level of interaction with the environment, facilitated mainly through the multi-tool that the player carries. The multi-tool has three heads and is used in different ways to solve some relatively simple interaction-based puzzles, open doors and weapon caches, and repair damaged drones.

Outside of the main story missions, Seezelslak’s Cantina acts as somewhat of an in-game hub, giving you a place to relax in between missions. Complete with mini-games, a jukebox, and some additional challenge missions, the Cantina offers some nice touches to the overall feeling of polish. However, it is pretty superficial in terms of actual content.

I’m sure some of you are thinking that you’ll while away hours playing Repulsor Darts and enjoying the eclectic ambience of an Outer Rim bar. You may want to manage those expectations. After about 20 minutes, you will have done everything there is to do at the Cantina, including a notably terrible challenge mission that involves you clearing dirty plates from the tables.

Apart from being a charming waystation as you progress through the game, one of the primary purposes of the Cantina is to facilitate the titular element of the game. It is here that Seezleslak will regale you with “Tales from the Galaxy’s Edge” in a really cool format, even if the outcome proves disappointing.

At launch, there is only one ‘tale’ available, and access to this interactive short story is elegantly presented as the gregarious bartender shares the story with the player over a drink. This mechanic is set up nicely with a tongue in cheek line where Seezleslak brags that he’s quite the storyteller. “Trust me,” He says, “it’ll feel like you’re living it.”

Once you’ve managed to collect specific ingredients from your exploits in the main plotline, you can bring them back to the bar and access the Temple of Darkness short story. It is here more than anywhere else that comparisons between Star Wars: Tales from The Galaxy’s Edge and the Vader Immortal series become relevant. Not necessarily in a positive way.

Temple of Darkness is very much in the vein of Vader Immortal, in that it presents a story that plays out along a narrow, linear pathway with minimal interactions at your disposal. It contains one or two obligatory action sequences which merely seem to exist so that they could shoehorn a little lightsaber combat into the game. The scale and scope of these sequences make them underwhelming, at best. The story takes about 10 minutes to complete, and despite being happy to wield a lightsaber, I found the whole thing ultimately unsatisfying.

It essentially offers a slight distraction from the main game but fails to capitalise on its potential. This would have been the perfect opportunity to add in a fourth instalment of the amazingly addictive Lightsaber Dojo that the Vader Immortal series introduced. Such an addition would also have added some much-needed replayability.

Star Wars: Tales from The Galaxy’s Edge does a lot of things right, and the quality of the visuals and audio is no exception. You can tell that this game had a lavish budget. The graphics on my Quest were great, with lovingly detailed environments and vistas that made me wish for a Sci-Fi inspired DLC for The Climb. The character animations are top-notch, my particular favourites being the hulking figure of Seezleslak and the diminutive Mubo.

Perhaps I’m being picky here, but my only real complaint with the graphical elements of Galaxy’s Edge is a lack of object collisions. Hands clip through objects, as do guns, which, in a game crafted with such detail, is jarring enough to break your connection with the world. After playing Until you Fall and experiencing the satisfaction of running the swords together. Sorry ILMxLAB, but I don’t think I can be satisfied with weapons that pass through each other with no resistance whatsoever.

I should also note that I did encounter a few graphical bugs in my playthrough. Most notable was a recurring glitch where, after dying, a level would restart without my left hand, and a few occasions where a level loaded without its textures. I’m sure these will be patched out quickly, but they’re worth mentioning, nonetheless.

The audio is a highlight of the game, and although much of the audio assets from the Vader series have been recycled, it does not detract from the experience at all. Instead, it adds continuity and helps ground you in the larger Star Wars universe. Another reason the audio is so successful lies in the voice talent employed. The voices of original cast members and some brilliant performances really help sell the plot and engage the player with the story.

DO OR DO NOT. THERE IS NO TRY.

Star Wars: Tales from the Galaxy’s Edge has entered the VR space with enormous shoes to fill. Sadly, at (a generous) 3-4 hours playtime, and with no real hook to keep you coming back, TFGE is not the long-form Star Wars game that many were hoping for. But, in a world where you can’t please everyone all the time, Galaxy’s Edge has done a great job of being a must-own title for anyone new to VR.

Star Wars: Tales from The Galaxy’s Edge is well polished, well-conceived, and, ultimately, fun. It may not be the game I had hoped it would be, but the simple fact is that I really did enjoy playing it, even though I probably won’t ever feel the need to do so again. For a huge swathe of new VR gamers, SW: TFGE will be an incredible experience that will set expectations for many new games to come.