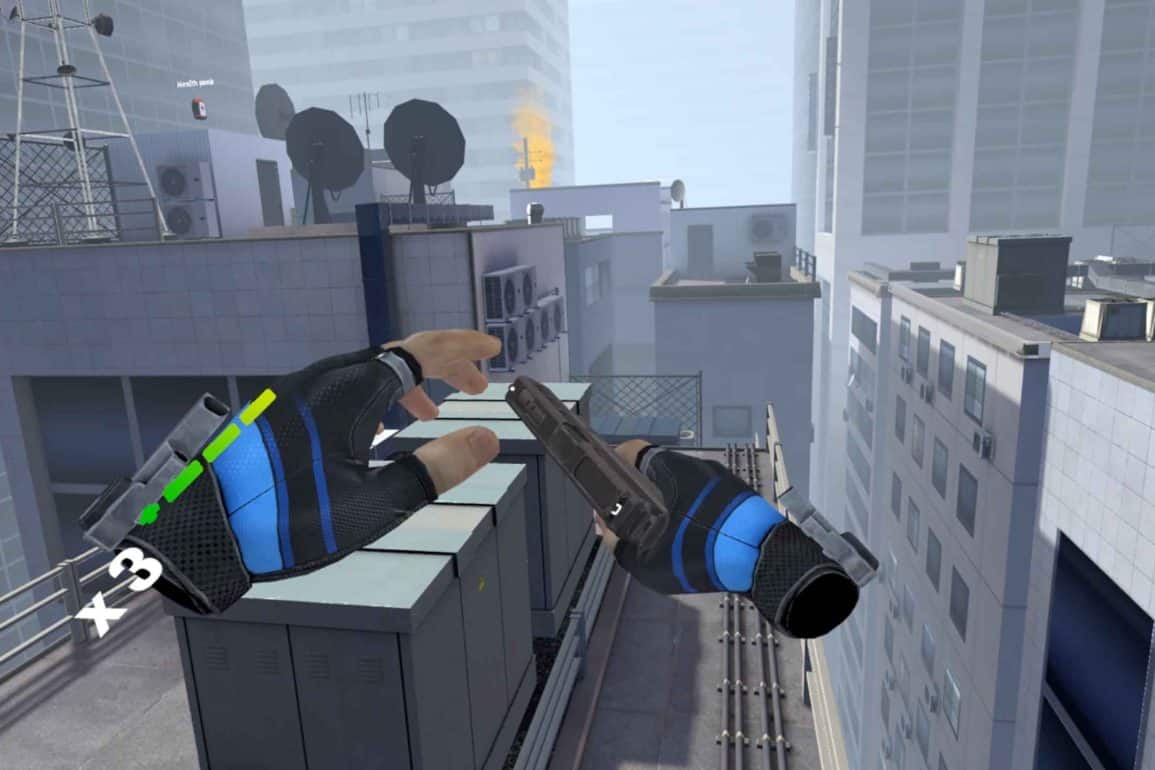 David Belle and a Whole Lot of Faith 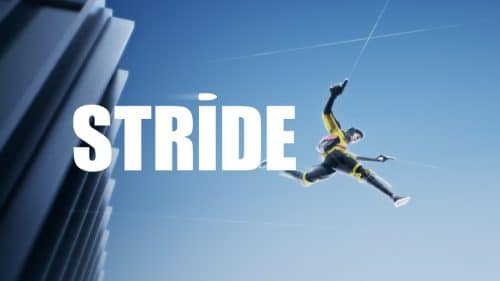 I first heard about STRIDE a while back when I read that a development team had taken it upon itself to, essentially, make Mirror’s Edge in VR.

You see, way back in 2008, when Electronic Arts were feeling experimental, and the internet was abuzz with crazy David Belle parkour videos, Mirror’s Edge came to the PS3 and the Xbox 360, and a year later, made its way to PC. It was a first-person platformer that beckoned you with the promise of flow-state skyscraper acrobatics peppered with melee combat. It featured a primarily monochromatic futuristic city rendered quite beautifully given the limitations of those two-generations old consoles. Although it got a sequel, it would remain somewhat of a niche title widely regarded for its exceptional art design and for daring to introduce a whole new form of gameplay. It was also a fresh new IP from a publisher otherwise busy iterating its sports games and FPS shooters, and, by virtue of being a First-Person Platformer, it felt like it wanted to exist in VR.

So, for many of us, STRIDE isn’t just a new, potentially interesting Quest game; it’s essentially a claimant to a throne upon which the Mirror’s Edge dilogy sat alone since 2008, only to share, reluctantly, with Ghostrunner, released just last year by 505 Games. But Ghostrunner, like Mirror’s Edge before it, is still a pancake game.

STRIDE attempts to bring the flow-state parkour of Mirror’s Edge to virtual reality and has already garnered very positive reviews on the Steam store for its admittedly unfinished PCVR iteration. Now, it’s on Quest!

STRIDE starts with a tutorial explaining the basic game mechanics, which are primarily about movement and traversal. You move with the right thumbstick, move faster by swinging your arms in a running motion, jump by holding down the A button and swinging your arms downward, and you can grab ledges and zip lines by holding the grip buttons. You can wall run by jumping towards a wall and then jumping off it again before you fall off, and you can also grapple when you find grapple points by holding down both the grip and trigger buttons.

Like Mirror’s Edge before it, there’s also some combat. You run into helmeted guys who shoot at you, and you can shoot them or pistol whip them if you’re close enough. Ideally, you want to shoot them after activating the slow-everything-down focus mode so that your shooting doesn’t disrupt your, well, Stride.

To its credit, STRIDE does all this very well.

Look At Me Go

The first few times I tried STRIDE, it didn’t quite click for me. I was fumbling around, finding it fiddly to have to click a button to jump while I was already madly swinging my arms to gain speed. I would jump just within reach of a nearby ledge and fumble and have a hard time grabbing it and pulling myself up so that I can continue my run. I was incompetent and knew it – this wasn’t a flow state at all; this was parkourous-interruptus. I had a quick chat with fellow 6DOF Reviewer Pete Austin who was far better at the game and would have been reviewing it had he not been swallowed whole by a dinosaur, and Pete sent me two video captures of his gameplay. Lo and behold! The game I had been hoping to see was right there in the footage! Pete was ten times better than I was! He was jumping effortlessly from platform to platform, grabbing ledges and jumping past them with one quick single-handed pull, wall running and bouncing off and grappling his way ever forward with the greatest of ease. I hated Pete, but he had opened my eyes!

I went back to my headset and ran the game again, and this time, knowing what could be done, I found myself far more adept. I wasn’t thrashing my arms about anymore to climb over ledges; I was doing a quick grab-and-pull and leaping off towards the next one! I also started getting used to pushing the A button to jump while doing the downward arm swing. It all came together, and the damn thing clicked.

Once you get the hang of it, STRIDE can be exhilarating. It strikes the sweet-spot flow state that most VR games aspire to, but few accomplish. If you’ve experienced it, you know what I’m talking about – sometimes I get it playing Beat Saber at higher difficulties, sometimes I get it during a perfect round of Pistol Whip, popping the bad guys on beat while weaving my head through matrix-style hails of bullets. Your brain takes a back seat, your mind is perfectly clear, and your body and hands do the talking, outperforming your expectations and making you go all zen. Until, of course, you run into the limitations of your skill level, and you end up dead, the spell is over, and you realize you’re drenched in sweat and out of breath.

Speaking of which, STRIDE is far more physical than I expected it to be. You’re swinging your arms for speed almost constantly, you’re pulling them up and down to jump, and you’re ducking for slides and dodging bullets when you’re getting shot. It can be quite a workout.

STRIDE is polished but minimalistic. The graphics are more than ‘inspired’ by Mirror’s Edge, and that’s no bad thing. It’s primarily monochromatic, with some patches of green grass and occasional yellow arrows helping you keep your bearings during runs. Those yellow highlights were also present in Mirror’s Edge but are less critical in Stride. The clean look extends to the interface and menu, which are generally square and flat, but fancied up with some slick parallax effects.

The soundtrack is good without being memorable. It gives energy to the gameplay and keeps you interested, but you won’t be scouring Spotify in the hope of adding any of it to your playlists. The sound effects are there, but they feel a bit muted.

The biggest problem I have with the graphics and audio involve the shooting. It’s not as big a problem for Stride as it was for YUKI, for example, because, after all, STRIDE isn’t a shooter, but developers Joy Way could make STRIDE feel much better with just a few tweaks. As it stands, the shooting feels far more pew-pew than bang-bang. It just lacks punch, and your bullet streams feel like they’re one pixel thick, making them hard to see and making it that much harder to correct your aim when you’re shooting at the bad guys. Give us thicker bullet streams, Joy Way! They don’t need to be as clear and outlined as those in Pistol Whip, but they shouldn’t be practically invisible.

Footfall could also be a little more prominent, I know I’m running, but a bit more audio feedback on that level would undoubtedly pump up the associated adrenaline. Speaking of which, it also occurs to me that perhaps something could be done to the audio when you’re making giant leaps through the air, maybe also add a low-key heartbeat effect when you’re in focus mode? I don’t know, but I’m certain that the audio, although serviceable, could be doing much more to enhance the overall experience.

All You Can See Is The Sky

At release, STRIDE comes with three game modes and, essentially, one graphical theme. You get Endless mode, which is STRIDE‘s version of an endless runner game in VR. The levels are procedurally generated, becoming more complex and more difficult as your run progresses, and there’s a wave of black nothingness eating away at the world behind you, making it lethal to stop advancing. Time Trial mode is what you expect, with various levels rated at different difficulties, and awarding one, two, or three stars based on how quickly you can get from start to finish.

The third mode, Arena, on the other hand, has you changing course all the time as you chase briefcases, hunt enemies, and chase checkpoints across the rooftops of the city. It’s also the one I find the clunkiest because a flow state is simply not that easy to maintain when you have to keep raising your palm and looking at it to determine where to go for the next enemy, briefcase, or checkpoint.

Arena mode would be far more fluid if we had the option to just constantly and automatically highlight the next closest objective to the player without the need to keep checking your wrist-fitted in-game display. It stops the action, and it also means you have to keep turning, comparing the distances of the targets, and changing direction.

STRIDE is a great new addition to the Quest library and a game that I can imagine coming back to time and time again, especially if I start seeing friends like Pete completely outperforming me on the leaderboards! It manages to achieve the flow-state that only the top class of VR games achieve, and the developers have already announced plans to add a campaign mode, promising not just a story with new characters but also additional gameplay elements. I’m cautiously optimistic about the campaign mode but hoping it won’t just amount to time trial challenges intercut with unnecessary cut scenes. They’re also adding multiplayer to Quest with three game modes already present in the public alpha Steam version and which I’m very interested in trying out on Quest. Neither of those promises, however, play any part in the current score.

Stride
TLDR : Summary
Accomplishing most of what it sets out to do, Stride is an exhilarating parkour-driven action game that'll have you traversing an abstract futuristic cityscape while sweating buckets and reward you with a well-earned flow-state when you do well. For those who get into it, it will provide a unique and rewarding experience.
Concept
7.5
Gameplay
9
Graphics
7.5
Audio
6.5
Longevity
8
Pros
Flow State Parkour
Clean Minimalistic Art Style
You'll Feel Like David Belle
Cons
No Multiplayer Yet
No Campaign Yet
Sparse Audio F/X
Almost Invisible Bullet Trails
8
Slick
Get it on the Oculus Store
STRIDE