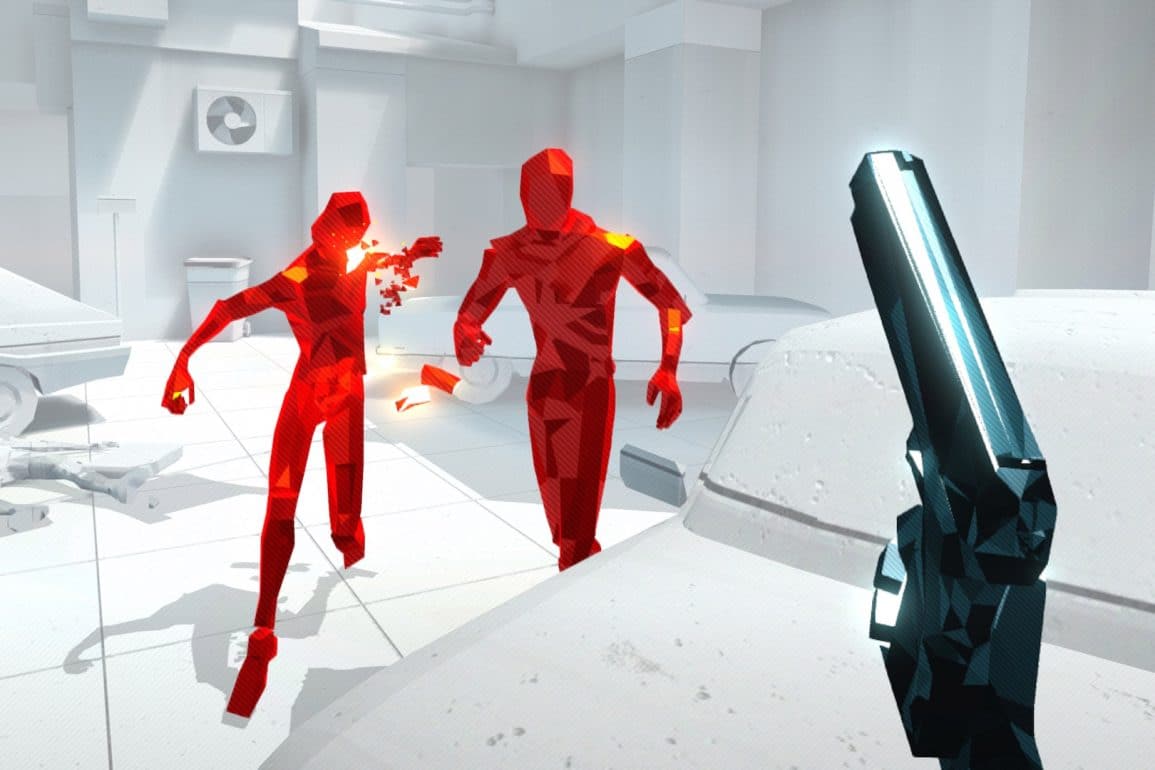 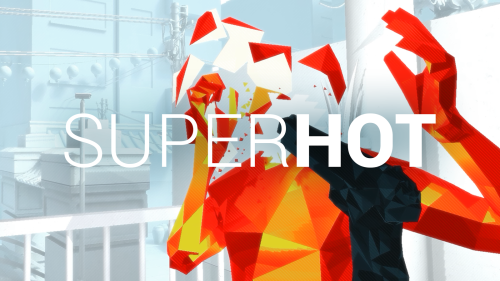 As the steel beam swung toward my face, I ducked taking cover behind a nearby computer console, narrowly avoiding the hail of bullets that closely followed the beam. I was trapped, and I could see the enemy moving to flank out of the corner of my eye. I reached for the nearest heavy object and sent it flying toward his head. Direct hit. As his weapon flew toward me, I stood up, and in one fluid motion caught it and let loose, mowing down the horde in front of me. “How did I pull that one off?” I wondered as a disembodied computer voice began chanting “SUPER… HOT… SUPER… HOT…”

SuperHot VR is a first-person shooter, except with the added twist that time moves forward only while you are moving your body. This shifts the genre of the game from an action game to more of a puzzle game. In each level, you need to figure out how to defeat all the enemies in the room without getting hit. This involves dodging bullets, throwing objects, catching dropped weapons from enemies, and shooting. The action is intense if you move at full speed, but since you control time with your movements, you can stop and take your time before springing into action. If all this sounds like too much for you, maybe you should try something like Fujii.

The gameplay of Superhot VR is sublime. Never has a game made me feel closer to starring in my own action movie. Dodging bullets Matrix-style, throwing ninja stars with deadly accuracy – to then catch the enemy’s dropped pistol – and quickly turning and firing on another enemy sneaking up on me feels incredible. The shooting mechanics in the game are perfect, aiming is very precise, and strategically leading your foes is a must. Throwing objects is a bit trickier to master, but it works well once you get the hang of it.

The fluidity of movement within the game is only enhanced by the Quest hardware. The 360° range of motion that the headset provides, as well as the lack of cables, gives you complete freedom of movement throughout the environments, limited only by the size of your play space. Even if you only have space to play standing and stationary, every level is beatable and still immensely fun. If you are standing stationary, however, there are a few instances where you will have to wait for enemies to close before you can attack them. This might leave you flailing your arms just to make time pass to allow your targets to get closer.

The story of the game is very minimalistic. Between levels, you are transported back to a small apartment full of computers from which you are supposedly playing the game. This apartment changes over time between levels in nuanced ways, but most of the storytelling comes from observation of items in this environment. This leads SuperHot VR to have a simple foundation of a story and leaves your mind to fill in the details. While this could be seen in other games as a negative, SuperHot uses this to create a very mysterious atmosphere, and playing this alongside the original console and PC SuperHot helps to fill in the story.

The story of SuperHot VR is also enhanced by its visuals. The in-game graphics consist of solid red, low-poly models against an untextured white background. Objects and weapons are solid blacks. This creates an enormous contrast between types of objects in the game, creating a visual language that is immediately identifiable to the player. It is clear what you need to do in each level, even with minimal instruction. Sound is also very minimalistic, bordering on nonexistent in some areas. Despite some tremendous audio feedback from sound effects, and the excellent computer voice that shouts “SUPER! HOT! SUPER! HOT!” upon completion of an area, audio is SuperHot VR’s weakest area.

SuperHot VR also has an in-game achievement system, with achievements popping up in the game world in the form of post-it notes. Between levels, your collection of these achievements is stuck to your apartment door, which is a very creative way to display your accomplishments in-game.

SuperHot VR is very short, taking the average player about 2 hours to complete on the first playthrough. However, upon completion of the game, several new modes are unlocked. All of these are addictive and add extra value to the game. These modes include speedrun modes, endless mode, headshot only mode, survival mode. There’s also a hardcore mode where the game moves more quickly, and every weapon only has one bullet. There is also a “guest” mode that allows other players to play the game from the beginning, but without saving progress. Unfortunately, none of these modes are available until the main campaign is finished once. This ‘play wall’ makes it a hard game to show to friends since you have to beat it first.

UPDATE: Since we wrote our review, SuperHot has been updated and now has a start-up menu that includes several new features including multiple save slots! Read all about it in their patch notes here!

SuperHot VR is the most innovative shooter I have ever played. This is the closest many gamers will come to starring in an action movie, and the story of the game is full of intrigue and hidden meanings. While Superhot VR has previously been released for other platforms, it feels like it was made with the Oculus Quest in mind.