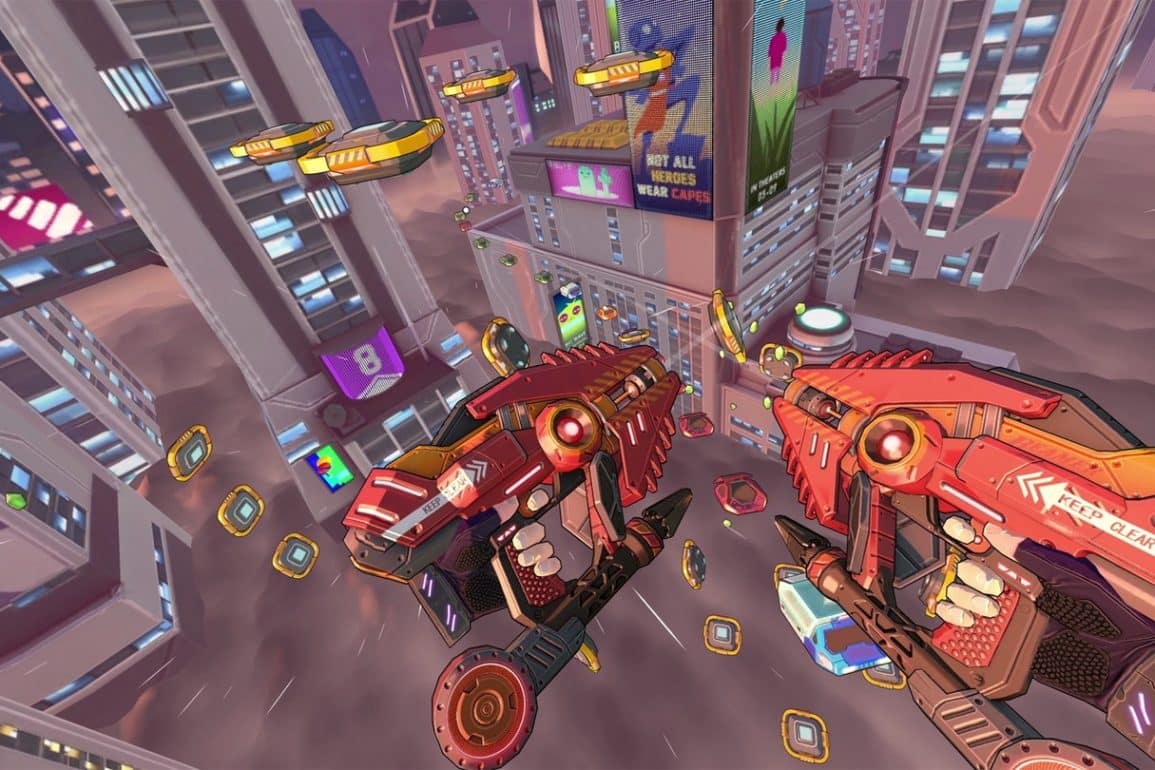 What if John McClane was Spider-Man? 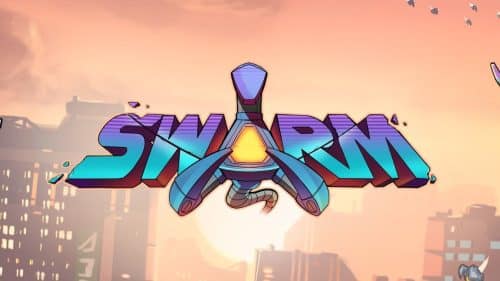 Originally announced back in April of 2020, SWARM has been bubbling away for quite a while now. Promising a fast-paced, arcade-style grapple-shooter packaged in a beautifully presented cell-shaded art style, SWARM has been a hotly anticipated title for many.

After 12 months in closed beta testing, GreenSky Games are finally ready to debut their baby as SWARM swings onto the Quest store. Grab your guns and dust off your Spider-Man fantasies because we’re about to find out if this one has been worth the wait…

Full disclosure here; I have been a beta tester for SWARM for about 10 months. I’ve watched it grow and develop first-hand and have probably put in close to 30 hours of gameplay since first gaining access to the beta. Is it fair to say this means I like the game? Yes. Yes, it is. Does this also mean I have an intimate understanding of both the game’s strengths and its weaknesses? Indeed, it does. Probably more than any other game that I’ve reviewed, I am confident that I have given SWARM more than enough time to shine. In my opinion, that’s precisely what it does.

SWARM is, in every essence, an arcade shooter. The premise is simple. The player is equipped with a gun locked to either hand; these can launch grapples or shoot. You then are presented with a play area, designated by a series of platforms hovering conveniently (if somewhat impossibly) to traverse around. Finally, a relentless assortment of robo-baddies is thrown into the mix, and there you have it! Arcade magic!

There is no contrived narrative telling you why you are inexplicably swinging around destroying the literal swarms of cyber goons. There’s just no need. This is arcade action at its finest. Any attempt to shoehorn in a plot just for the sake of having a “full story campaign” would just slow the pacing down and cheapen the whole experience.

I’m relatively sure that I have referred to other games as “non-stop action” in the past. Still, that nomenclature seems foolishly misused on other games when compared to SWARM. For starters, one of the things that sets SWARM apart is that you literally cannot stop moving. The entire game is spent in a state of perpetual motion, swinging from platform to platform as you unleash hell on countless waves of bot-based badness.

Raining bullets into the fray whilst remaining cognizant of where you’re tethered and where your next grapple needs to land is both fiendishly complicated and frighteningly intuitive. After a while, you stop really looking for the next grapple, relying instead on instinct and muscle memory to guide you around the zone. It really is fun.

Despite the theoretically dizzying movement at the heart of SWARM, I did not once experience any motion sickness at all. However, I can imagine this will not be the case for some. Despite having fairly advanced “VR legs”, I am still prone to the odd game (Dash Dash World, anyone?), but SWARM was a surprisingly comfortable experience to enjoy. This comfort probably comes from the excellent physics system that has been baked into the swinging mechanics.

There are nuanced little touches to the animation that help sell the feeling of weight and tension as you careen around the levels at breakneck speed. These touches set SWARM above its rivals. The ability to pull down on the grapple line to gain lift or use a hand over hand technique to build up some serious speed makes for some really responsive manoeuvring. Couple that with or the ability to use both grapples to make sharp changes in direction, and you have a movement system that is fluid, unique and utterly joyful.

The action in SWARM is set over five distinct Zones, each comprising five levels and a Boss fight, and each of the zones has its own unique characteristics and environmental hazards to deal with. This can see you navigating anything from flying cars as they zip around a futuristic city to electrified platforms that cause damage if you grapple them by mistake. These environmental elements ensure that each zone plays differently and demands that you change your play style and situational awareness to suit.

Each Zone is then broken up into a range of classic arcade mission types, from wave defence to timed survival modes. There are also mission types that focus more on precise movement, challenging you to collect crystals as they move around the map. The Boss fights feel appropriately epic, and true to classic arcade games, you will need to find the right strategy and timing for each to take them down.

SWARM sees the player begin with a standard pistol style weapon that will see your trigger figure aching before long, but string together enough kills in a row, and you trigger a kill streak. This enables auto fire for as long as you can continue to make kills without stopping, a perk which I quite frankly never got tired of. There are also temporary weapon powerups that spawn throughout each level, offering things like heat-seeking missiles and a powerful laser beam, amongst others.

The player also has a limited ability to slow time and a “Zip” attack which allows you to highlight a specific enemy or platform and launch straight at it. Adding these functions into the mix and deciding when to deploy powerups lends a light strategic element to the gameplay, but never enough to take away from the action’s immediate intensity.

SWARM is a stunning game that delivers the popular cel-shaded art style as well as any other title that I’ve played on Quest. The visuals are bright and vibrant and clear, suiting the arcadey tone of the game perfectly. Each Zone and enemy type is thoughtfully designed to work together, keeping everything clearly visible and easy to understand even amongst the game’s most chaotic moments. And make no mistake, the gameplay gets CHAOTIC!

After the Fall | Review

The menus and UI are also very well designed, presented in an engaging comic book style that I found really cool to look at. It’s crisp, easy to navigate and just screams of polish.

The music is also excellent, with each zone having a unique musical theme that goes a long way to making things feel fresh as you progress. The music contributes massively to the game’s energy, from vaguely Middle Eastern-inspired pop to hip hop and some heavy rock. The tracks and themes provide a character and depth that help make each zone unique.

The final component that helps bring everything together is the sound design, and again this is commendable. From gunshots to explosions, everything sounds exactly as it should. The voice-over that announces your achievements and warns you of incoming missiles is great. The spatial audio works well, and cues that let you know what’s happening around you are all spot on. All in all, the audio is exactly how it should be for a game like this.

SWARM launches with over twenty levels to play, bosses to beat, and a difficulty curve that will provide a challenge for even the most hardened of gamers. These difficulty settings have been really thoughtfully produced and tailor the experience to almost any skill level without losing any of the things that make the game great. I play Casual when I feel like zoning out and having mindless fun, Normal when I want to score chase, and Hard when I feel like a challenge (aka getting instantly obliterated).

Trying to gauge “how long” SWARM will be is an exercise in futility as this is an ultimate “your mileage may vary” case. There are five mission types in total, which all centre around mastering the art of Swing Swing Pew Pew. These mission types are then repeated throughout the different Zones, which keeps things feeling fresh as you progress through the different environments. Between the mission variety and the unique challenges that each zone presents, there is more than enough to keep you coming back for more – time and time again.

SWARM is a fantastic iteration of ‘classic arcade shooter’. The amazingly well delivered perpetual motion mechanic lends a truly unique element to the genre and makes this game substantially better than most other arcade shooters currently available in VR. SWARM is the perfect mix of quick, accessible fun that suits jumping in for quick play sessions as much as it does settling in for much longer ones.

All that said, SWARM is what it is. If you don’t like arcade shooters, have no intention of score-chasing, or if games that have no storyline frustrate you, this may not be for you. SWARM stands at the top end of a crowded genre. It succeeds at every essential element that an arcade game should have and offers enough innovation to make it a great choice, even for genre veterans.

Swarm
TLDR : Summary
SWARM offers a non-stop thrill ride of arcade action. The core mechanics create a synergy between a unique, fluid movement system and relentless, almost overwhelming action that is a joy to experience. With a skill curve that embodies easy to learn, hard to master and well-realised difficulty settings that allow anyone to enjoy it, SWARM has one thing at its core - fun.
Concept
8
Gameplay
9
Graphics
8.5
Audio
8
Longevity
8
User Rating0 Votes
0
Pros
Unique movement system that avoids motion sickness well
Beautifully vibrant art style
Highly competitive global/local leaderboards
Cons
Only offers Arcade modes, so narrative gamers maybe disappointed
Some people may be put off by constant movement
Could use more mission types to expand replay
8.5
Addictive
Get it on the Oculus Store
Swarm