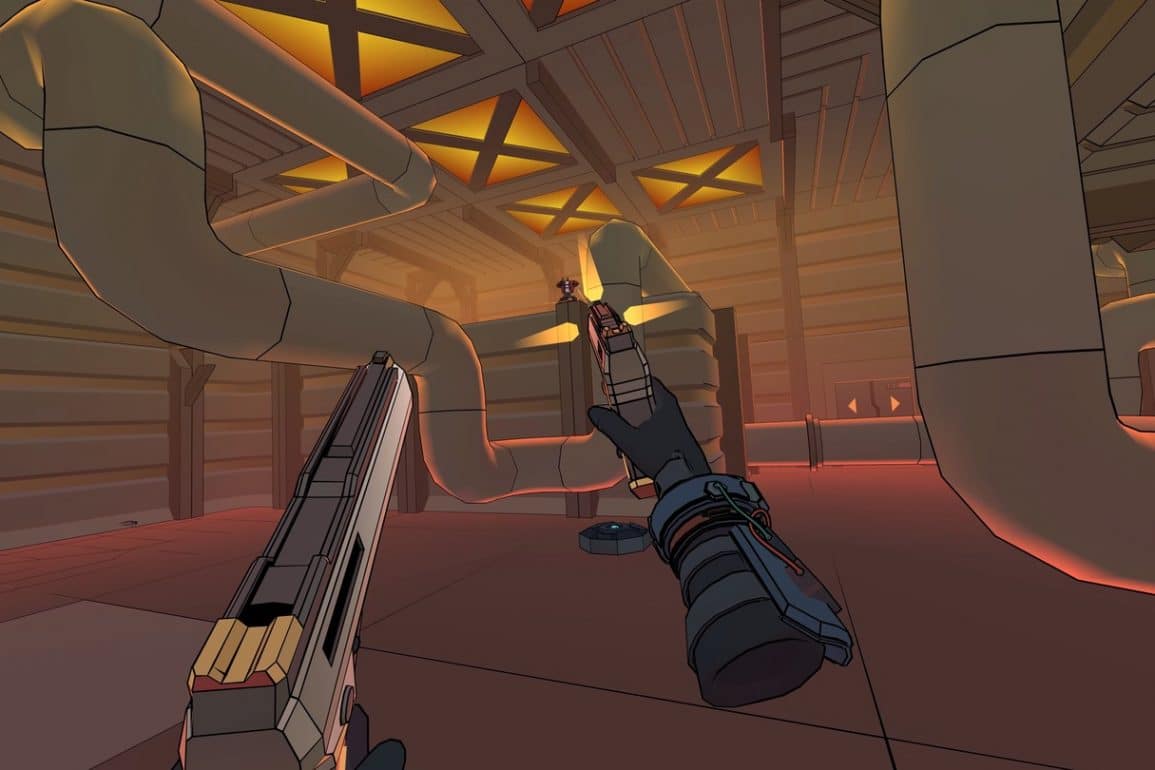 The trusty roguelike may well have found its virtual haven on the Quest, and newcomer Sweet Surrender is another entry taking aim at the top spot. Offering players an array of procedurally generated levels and armoury of weapons and perks, indie devs Salmi Games hope to hook players into their relentless gameplay loop.

With the Sci-Fi shooter market already bulging at the seams, does Sweet Surrender have what it takes to blast the heads off its competition? Or will it be the latest victim of Perma-Death?

Lock and load everybody. It’s time to find out.

THE GENTLE ART OF PEW-PEW

Roguelikes like Sweet Surrender offer a theoretically endless gameplay loop as core elements and enemies are randomly generated and populated from one run to the next. The theory is that the uniqueness of each run maintains a freshness that will keep players coming back. Essentially, roguelikes give you a basic premise that that should get you hooked, then they shuffle their components every time to keep you hooked.

And I, for one, love them. Usually…

Sweet Surrender has all the composite elements that a roguelike needs, but the execution feels slightly off. It’s the game design equivalent of giving the same recipe and ingredients to a Michelin starred chef and a talented home cook. The latter will undoubtedly serve you something worth trying. Still, when placed next to each other, the differences between the two become stark, and it’s the subtle touches of my allegorical Michelin man that Sweet Surrender lacks.

Good roguelikes tease the player. They coax them back time and time again with the promise of new treasures hidden beyond every run. In Death: Unchained is a perfect example of this; every time you play, you know exactly what’s needed to unlock the next element. This knowledge lets you tailor your run towards achieving the targets required for the specific reward that excites you the most. It lets you know when you’ve unlocked a new achievement, allowing you to bask in self-congratulatory revelry, which subconsciously urges you to jump back in to use your newly earned embellishment.

True to the genre’s classic tropes, Sweet Surrender does away with narrative trappings. Simply boot the game up and breeze through the tutorial, and you’re straight into the action.

Except for the fact that the tutorial only covers movement and shooting and leaves vital points of progression and gameplay unexplained. No problems, though! All good roguelikes need you to die a little before they reveal their depth and refinement, so best to shake off that mild angst and get a bit of dying out of the way early on!

Ironically, Sweet Surrender contains some great progression elements but maddeningly keeps them hidden, robbing players of the gaming version of a dangling carrot. In your next run, you might find yourself encountering a new perk or weapon, or you may not. Only the omnipotent overlords at Salmi Games know what awaits you next, and they are holding those cards close to their chests.

As a player, you simply die and start again.

Putting aside all roguelike talk, Sweet Surrender is, at its heart, a sci-fi shooter.

The player works their way through a series of randomly generated rooms, blasting an assortment of robotic goons along the way. The game is broken into four distinct subsections, starting in the mines and working your way up to the surface. In each subsection, you are tasked with finding the lift to the next section, clearing rooms of enemies and looting for perks along the way. The game’s pacing is maintained by the ever-present threat of a giant, un-killable robot that will track you down and destroy you if you don’t keep advancing. This keeps the gameplay tightly balanced between pushing forward to the next section and pillaging as much as possible along the way. The risk/reward loop this dynamic is a great way to add tension and is one of the better features of the Sweet Surrender.

Along your way, you will acquire a progressively expanding arsenal of classic sci-fi weaponry, from the obligatory pistols and shotguns to slightly snazzier options like the grenade launcher and sniper rifle. The player can holster larger weapons over the shoulder, smaller weapons by the hips, and grenades and extra health items are stored in four conveniently placed torso slots. Additionally, perks are handled by microchips installed into one of four slots located on the back of the players’ gloves. All this allows the player to customise their playstyle on the fly, based on available materials per run.

Unfortunately, despite the array of weaponry on offer, the two-handed weapon handling is diabolically poor. From the aggravating placement of the offhand to the way the gun pivots as you aim, there is definitely a fundamental flaw in how this system is implemented. Sadly, it renders these weapons almost unusable. The starting pistol is so surprisingly powerful and well delivered that its strength weakens the progression system. My most successful runs tended to be those where I stuck to the pistol, paired it with the excellent hand shield and bolstered it with perks.

The level design is adequate, with the various procedurally generated rooms staying fresh for a while. However, soon enough, you will have seen every variation on offer, particularly in the first zone. Given that the enemies you encounter are tied to the zones you’re in rather than your rank within the game, the first “Mines” section becomes EXTREMELY tedious far too quickly. There are roughly 6 enemy types available in this first section. After about 2 hours of Sweet Surrender, I found grinding through the first section an absolute chore.

This tediousness is a pretty big deal when considering that these sections will make up the first 10 minutes of every run. As a result, I found my desire to play the game again dwindled to almost non-existent rather quickly.

Perma-Death is the one thing that puts off most people who don’t enjoy roguelikes.

I don’t mind it, as the constant threat of impending doom adds tension to crucial moments that just can’t exist in a game with checkpoints. But one thing that I cannot abide by, which has absolutely NO place in a Perma-Death Loop, is Insta-death. Sweet Surrender commits this most deadly of sins, and, for me at least, it’s a deal-breaker.

Dotted throughout the procedurally generated action at the core of Sweet Surrender are a few innocuous pockets of instantaneous doom, and they are beyond frustrating. There are a few little sections where there is no railing, or a random corner happens to be made of lava. Woe betide the player who inadvertently strafes into one of these.

Perhaps I’m just a little sensitive because this happened in my final two runs before sitting down to write this. I had an amazing loadout in both runs, was playing well, and had progressed further than ever before. During both runs, I failed to check some corner or another, wandered into superheated doom, and was instantly ejected from the game. I’m sorry, but no thanks. At the very least, alarm me with a red screen and a rapidly diminishing health bar, but to get that far in a game only to have it end abruptly because of a misplaced step is unforgivable.

Sweet Surrender is the latest in an increasingly long line of games capitalising on the cell-shaded style that the Quest does so well. On par with titles like Yupitergrad, it is well suited to the style but not as impressive as Swarm’s delivery. Sweet Surrender’s graphics are clear and cohesive. It looks good…but not great.

Each section has its own visual flourishes that differentiate it from the others. This goes a long way towards keeping the environments from growing stale. That said, the variations aren’t so stark that they mix the gameplay up much, and that feels like a missed opportunity. Everything works and is more than acceptable, but it’s not going to be the game that you’re telling your friends about.

The sound is initially impressive but ultimately functional. The audio begins to feel old in short enough time. The more ambient walking soundtrack fits well between action sequences, while the faster-paced electro audio elevates the tension when the guns are firing.

Sweet Surrender’s presentation is perfectly acceptable, but there’s not enough variation. There are only so many times that the same riff can get the blood pumping before one can’t help but think that the rest of the soundtrack is hiding alongside those progression explainers.

PARTING IS SUCH SWEET SORROW

Sweet Surrender offers an entertaining, albeit flawed, action experience that will no doubt capture the attention of many players, if only for a limited time. Despite containing many of the positive elements of the roguelike genre, it does so without capitalising on the subtleties and nuances that can make the genre so addictive. If you just LOVE sci-fi shooters or just can’t get enough of the genre, then Sweet Surrender is worth looking at. If, however, you only have room on your Quest for the very best, you’d be better off picking up In Death: Unchained or Robo Recall: Unplugged instead.

Sweet Surrender
TLDR : Summary
Sweet Surrender is a sci-fi roguelike shooter that, despite containing the genre's essential elements, fails to deliver them with enough refinement to make the game shine.
Concept
6.5
Gameplay
6.5
Graphics
7
Audio
7
Longevity
6
Pros
Stylish visual identity that's fun to be in
Solid action loop at the core of the game
Good progression of unlockable power-ups
Cons
Instant death sections are frustrating
No line of sight to progression tree
Repetitive early stages do not encourage replay
Two-handed gunplay needs a LOT of work
6
Not Quite
Get it on the Oculus Store
Sweet Surrender