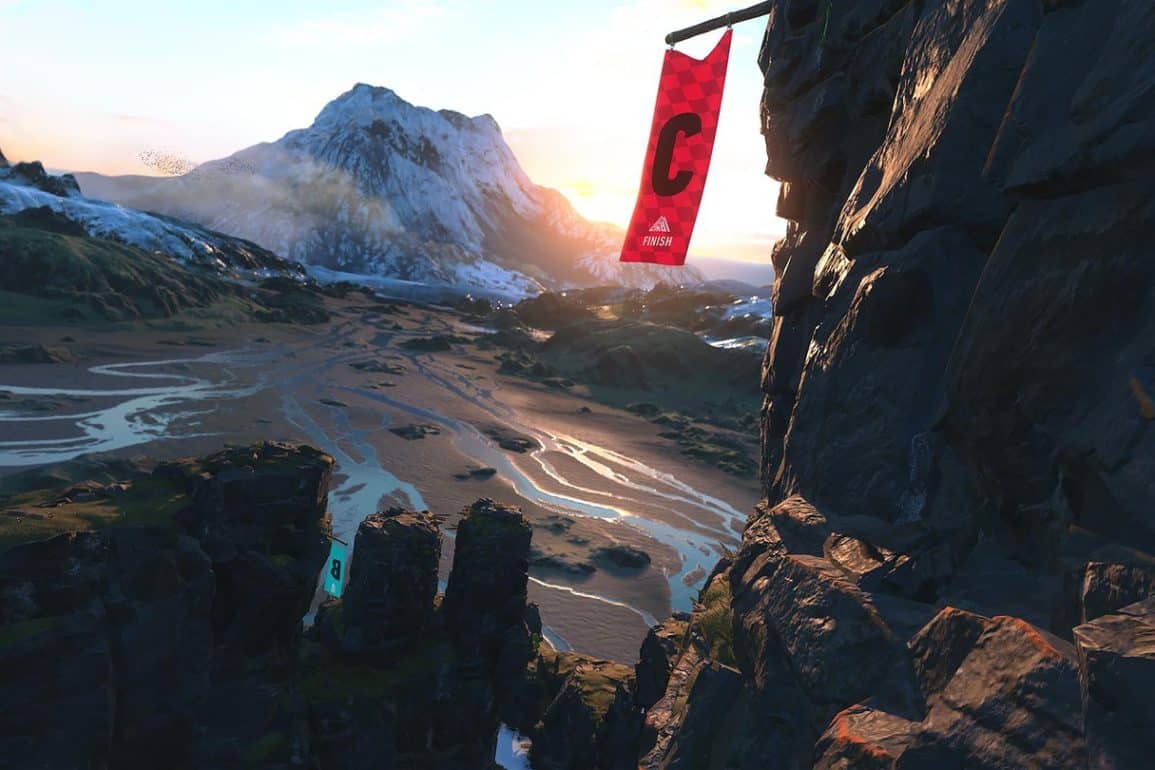 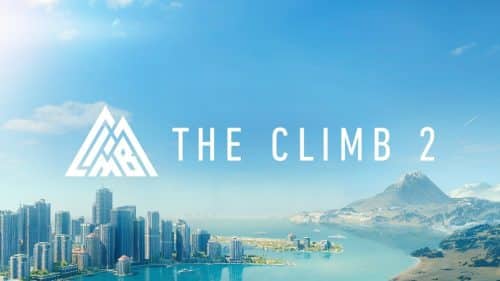 It’s been a long time coming, and it’s seen a couple of delays, but The Climb 2 is finally out on Quest. If you’ve ever played (or heard of) the original, you’ll know that it’s a title perfectly suited for virtual reality gaming. It offers vast expanses, acrophobia-defying gameplay, and beautifully depicted locations. I reviewed The Climb a while back and found it quite impressive, but I had a few issues with it. Now it’s back, and I find myself, once again, climbing up mountains. Well, not just mountains, since the sequel also features skyscrapers. So how does it fare?

The Climb 2, like its predecessor, is a virtual reality climbing game. At the beginning of each level, you’re standing on a platform, mid-way up a mountain or building. You have to make your way up the checkpoints until you reach the top. The game presents you with clearly visible grip points that you can grip with either of your hands, and it’s up to you to decide on the best path up. The game mechanics rely on two factors, stamina and speed. The longer (and harder – but we’ll come to that in a bit) you hold on to something, the more your hand stamina runs out. Each hand has a stamina meter, and when it’s all used up, you’ll lose your grip. There are several ways to get around this; you can climb faster so that your stamina doesn’t run out so quickly, you can pause to chalk your hands so that your grips last longer, and (new to this version) you can grip at half strength.

The Vistas of Your Mind

Although The Climb 2 offers mostly the same landscapes found in the first game, the challenges are different because the climbing paths are different, and some new elements have been added to the mix. The most significant standout addition for fans of the old game will be the city levels, giving you the chance to climb skyscrapers in the familiar environs of a cityscape. Those climbs somehow felt more realistic and a little scarier to me, but that could be because I’m mostly a city dweller, so, oddly enough, they felt a bit more realistic than the natural settings of the other levels.

As mentioned above, the levels also feature some new elements that contribute to the gameplay. You’ll find ladders that often swing when you grab hold of them, scaring the hell out of the weak of heart. There are also some pretty cool zip lines. The game also features moving grip points that move up and down on buildings. I’m of two minds regarding those; on the one hand, they add a novel element to the gameplay, but on the other hand, they’re so unrealistic as to border on being immersion-shattering contraptions.

My Biceps for a Triceps

Many people seem to be under the impression that The Climb 2 is somehow a fitness game or that it’ll do wonders for your upper body. I’m not one of those people. Sure, the game might tire your arms if you’re continually holding your hands up high as though you genuinely were carrying your weight, but you’re not, and the game doesn’t force you to. You can easily play this entire game with your arms comfortably at waist level. The only time the game penalizes you is if your arms are too far from your body, which results in your stamina running out far quicker.

If it’s an exercise you’re looking for, games like Beat Saber, FitXR, OhShape, and Pistol Whip will give you a far better workout. The Climb 2 is, however, probably great for acrophobes who want to use it for some height desensitization therapy.

Like its predecessor, The Climb, The Climb 2 is very pretty. Look, it’s a game from Crytek, the makers of “Achieved by’ CryEngine fame. It’s bound to be pretty. We knew coming it that it would be lovely. So yes, it is stunning, especially if you’re not used to virtual reality and especially if you consider that it’s running on a stand-alone headset.

But you know what? The Climb was also pretty damn good looking, and apart from the addition of the city levels, the floaty gadgets, and a lot more animal and insect life, it doesn’t look that much better than the first one. Sure, those additional elements and the little critters and the ram you’ll see at the top of a mountain add to the game and make the environments feel a lot less sterile, but are they worth a whole new purchase? It’s a bit of a hard sell, especially at full price.

A Bit of Deja-Vu

It seems a bit unfair to blame a sequel for being similar to the original game. I mean – after all, that’s what sequels are supposed to offer, right? More of the same! But they’re also supposed to offer much more of the same, and even though it’s difficult, we expect them to innovate to a certain extent. Although The Climb 2 does provide a little more and does add a few elements to the general gameplay mechanics, it doesn’t quite feel like something that’s been cooking for several years. Sure, the Quest version of The Climb only came out in December of 2019, but the original game was released way back in 2016. With a ‘2’ in the name, we expected a lot more.

The additional content and the slight gameplay tweaks feel like they should’ve been added to the base game for free or offered as a DLC for $14.99. Compare this pricing to a game like Pistol Whip, which has seen a ridiculous amount of free DLC, and you start feeling that Crytek got a little greedy.

Usually, I’d write a longer review for a game that’s selling at full price, but it feels only fair to put in as much effort into this review as I feel Crytek have put into their sequel. So let’s get to the conclusion..

Top Of The World Ma’!

The Climb 2 is an excellent purchase if you’ve never bought or played the original, but for those of us who have, it feels like a cash-grab. It’s a great looking game with solid mechanics and a fantastic showcase for virtual reality gaming, but it should have been offered as a free or modestly-priced DLC for the original title. Buy this if you don’t have the original, or if you loved the original so much that you’re willing to pay full price yet again, but be wary of diminishing returns on your investment. Given that it came out so much later, and given that it’s a sequel, I’d have scored it a 7 rather than a 7.5 if I wasn’t worried that people might think the first was superior.

The Climb 2
TLDR : Summary
The Climb 2 is an excellent purchase for those who've never bought or played the original but does little to distinguish itself as a new entry in the series.
Concept
6.5
Gameplay
8.5
Graphics
9
Audio
7.5
Longevity
6
User Rating0 Votes
0
Pros
Cityscapes
Leaderboards, Asynchronous Competition
Cons
Too much like the first entry
Should've been a DLC
Moving grips on skyscrapers are gimmicky
7.5
Familiar
Get it on the Oculus Store
The Climb 2