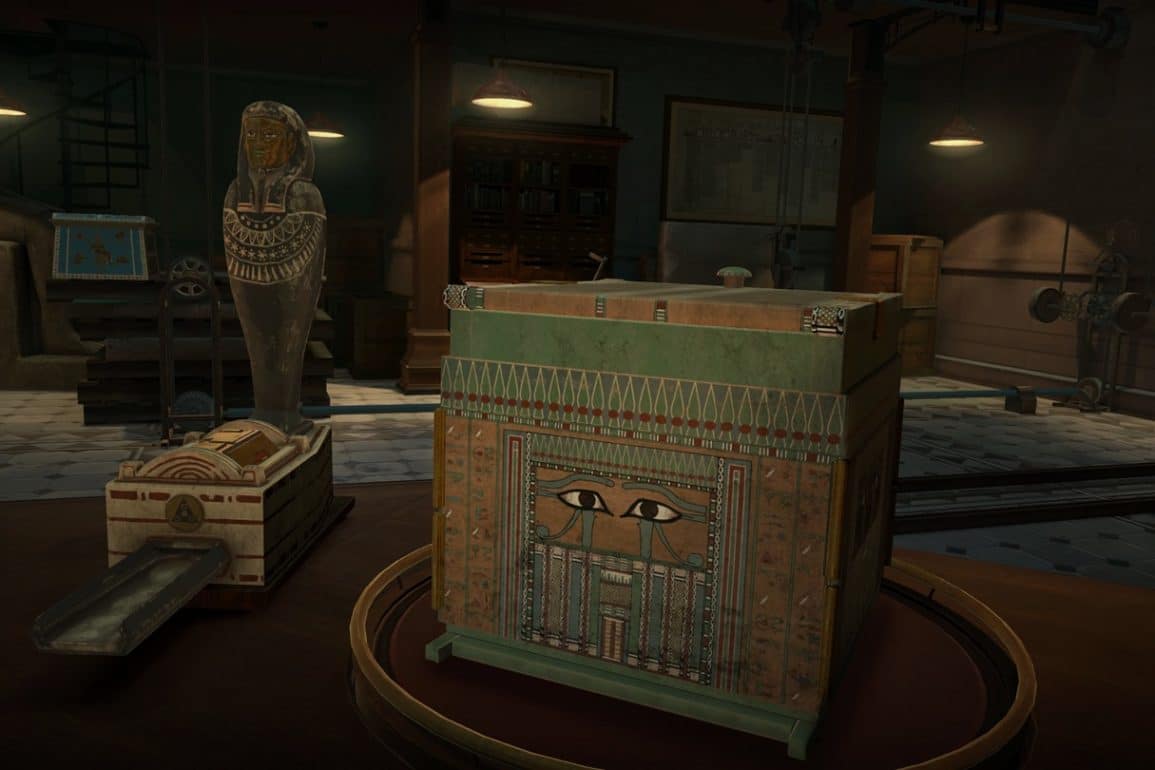 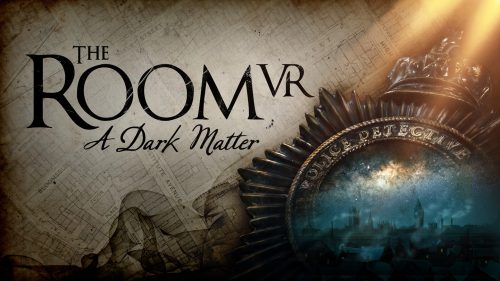 The Room was an important title for mobile gaming. It intelligently utilised the possibilities of touchscreen interactions to provide players with beautifully wrought, tactile puzzle boxes; lots of levers, dials and buttons to play with, wrapped up in a spooky period setting that fused science with the supernatural. It was a class act, and a well-deserved hit. Four games and several multi-platform releases later, the latest instalment of this well-regarded series, The Room VR: A Dark Matter, has arrived on the new frontier of VR. Will it prove to be a killer app for the Oculus Quest?

The game casts you as the hands and face of a police detective in Victorian London, investigating the disappearance of an archaeologist. It’s a matter of minutes before the plot thickens, and the game sets out its stall as an unnerving plunge into the unknown and arcane. It plays out in a series of discrete rooms, packed with contraption-based puzzles that you have to fiddle with and figure out in order to progress. Armed with only a mysterious eyepiece that reveals secrets hidden to the naked eye, and a basic inventory system, it’s up to the player to try and unravel the truth.

THE END OF MR. Y BUTTON

Whereas previous games in the series have made a virtue of the touchscreen, this time it’s VR’s turn. As you might imagine, Fireproof Games have nailed those glorious interactions in VR. Pulleys must be pulled, buttons must be pressed, and mechanisms must be activated. An early example of the further immersion that VR has brought to the game is the flickering slide projector in the very first room; you can view the projected images while physically pulling the lever for the next slide without having to look at it. It’s a simple but meaningful indication of how a good interaction can sell a setting – and vice versa. It’s also impressive that they manage to do this with the Quest’s inside-out tracking, which usually depends on having your virtual hands in view at all times.

Navigation is handled by zipping between hotspots, teleportation style. I know that this will be initially frustrating to some – it certainly was to me. However, it proves to work in the game’s favour; it becomes apparent that it’s vital to the way that everything works. The game doesn’t want you to be lost and wandering around, not knowing if that candlestick might be interactive or if that book might activate a hidden door. It gives you a series of focused mechanical and environmental riddles to solve, and it wants to provide you with the context and clarity for them, without you having to fight against the sensations of abstraction and aimlessness that a more freeform exploration puzzle game can often create. I think this clarity of design helps to ground the game, and is part of the unique legacy of The Room series which I’m glad has carried over to VR.

If there is a misstep that The Room VR makes with navigation, it’s that the game features fade-in, fade-out snap-turning only. There’s no option for smooth analogue turning unless, of course, you physically turn in the space. I would have thought that giving the player more options in this regard is more or less mandatory now, and it seems surprisingly backwards that it doesn’t. I do not like snap turning and never use it, but I understand some people do. I feel like it’s enough of a task fighting the forces of darkness in Victorian London using only some tweed gloves, without feeling like a twitchy epileptic into the bargain. Whilst the game gives the option of playing seated, I really wouldn’t recommend it. Not only does this force you to use the immersion-breaking snap turn, but it also makes a lot of the interactions finicky and uncomfortable if you have any arms on your chair, as they require broad movements and a lot of reaching down and around. The best method for seated play would be on a swivel chair with no armrests; it’s not one for armchair detectives.

I’m constantly surprised that this kind of setting isn’t used more for videogames, but also glad that The Room VR has the run of it. All the fun tropes of Victoriana mystery are present and gloriously realised; Egyptology and archaeology, fog-bound streets, and a symphony of brass and wood and clockwork. It’s pleasantly haunted by the starched collars of Christopher Lee and Peter Cushing and the heyday of mid-to-late 1970’s Doctor Who. It’s never so crass and unsubtle as to self-identify as steampunk, of course, but it sure scratches that itch. It never betrays the setting or plays it for cheap references or postmodern irony; it’s neck-deep in its conviction, and so much better for it. It’s obliquely referential to its influences without ever being overt – you won’t find any letters from S. Holmes or luggage embossed with C. T. HULU. Huge props to Fireproof Games for continuing this level of restraint.

The graphics and sound design in The Room VR are phenomenal. The level of detail that the devs have rinsed from the Quest’s modest hardware is very impressive, with the texture work, reflections, and patina of different surfaces all being quite something to behold. The Quest version holds its own very well against the technically heftier PC and PSVR versions. The audio consists of foreboding atmospherics, with every click and tick of machinery or rasp of metal on stone flawlessly realised.

The only thing about the game that seems less than stellar is the way that the virtual hands are useless and weightless with the non-interactive objects or items that have already been used. They just clip through the scenery and the furniture like nothing is substantial, and is the teeniest bit immersion-breaking and dated. No-one is expecting Half-Life: Alyx levels of physics-based solidity, but this sort of thing is rapidly becoming old hat, and not in a charming period way.

Apart from that, though, this is more than polished across the board.

Some specifics are hard to convey when we strive to make our reviews as spoiler-free as possible. If you are at all interested in this game, it won’t let you down. Avoid spoilers and lengthy irresponsible video previews as much as possible if you think you’ll be adding this to your library. Every interaction in the game is a joy to discover and perform, every location a treasure. The Room VR: A Dark Matter’s pleasures are subtle but manifold and substantial. The plot is teasingly vague and well-written, as intriguing and insubstantial as the ghosts of the near-future you’ll encounter sporadically through the locations.

There’s enough in The Room VR: A Dark Matter to reward fans of the series as a whole, whilst being utterly accessible if it’s your first time in The Room. You can, of course, ignore a lot of the plot, and blast through the game quite quickly with hints turned on, but this wouldn’t be enjoying the title in the way it’s been designed. Our advice would be to play standing up, and with the hints turned off, and you’ll be hooked. As with other games in the series, the ending is satisfying enough but inconclusive and serves as a non-final lead in towards what will hopefully be the next game. Without spoiling anything, it’s worth seeing through – The Room VR might not be the longest game in the world, but you won’t feel short-changed.

The Room VR: A Dark Matter
TLDR : Summary
he Room VR: A Dark Matter is a creepy puzzle game which satisfies, thrills and rewards in equal measure. It'll draw you in with its fantastic atmosphere, great setting and classy graphics, and hook you with its precisely-wrought and polished (but never obtuse or demanding) puzzles. A must-play VR title which plays best on the Quest.
Concept
9
Gameplay
9
Graphics
8.5
Audio
8
Longevity
5
User Rating6 Votes
8.5
Pros
Brilliant interactions
Well-judged puzzles
Incredible presentation
Cons
Insubstantial hands
Snap turning only
Playing seated is a bit restrictive
8.5
Stunning
Get it on the Oculus Store
The Room VR: A Dark Matter