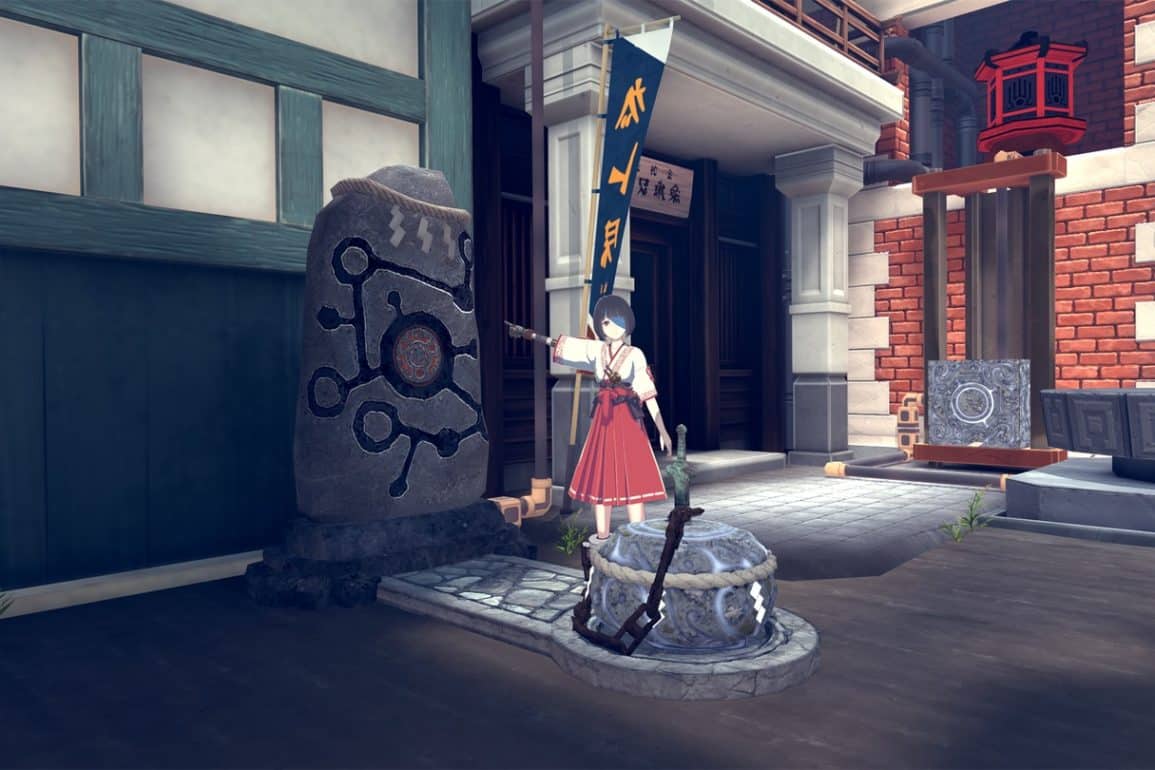 The Tale of Onogoro | Review 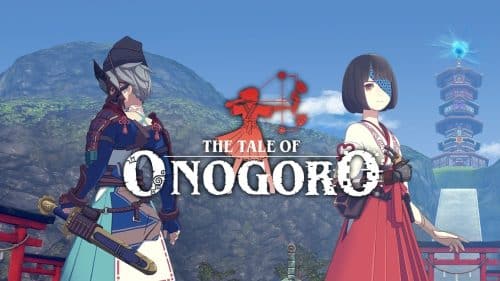 In an oversimplification of something he once wrote to his brother, Anton Chekov is credited as saying: “Don’t tell me the moon is shining; show me the glint of moonlight on broken glass.” This is the first known mention of the writing mantra ‘Show, don’t tell’. A mantra I wish Hiromichi Takahashi had heeded going into The Tale of Onogoro.

The Devil You Know

The titular Onogoro is an island floating in the sky of an alternate Japan where magic is real and steam-powered machines litter the landscape. The player’s task is to help High Priestess Haru Kose track down five ‘Incensed Kami’ that have been set upon the region by the evil Masatake Arakida. The angry Kaiju-style monsters must be quelled.

The player arrives on the scene via a nice ‘meta’ moment in which Haru describes you as a spectral form that, for a moment, she thinks is wearing some kind of goggles. This is sadly the first and last clever thing that Onogoro does with its narrative, as from this point on, Haru uses every spare breath to witter on about various insignificances designed to build lore and character.

It transpires that Masatake has shackled Haru to a quelling stone so he can go about his nefarious ways. In order for Haru to move more than a foot from this magical boulder, you must wield the Celestial Weapons. These are ornate pistol-style devices that project a tractor beam you can use to move the stone and Haru around. Controls are the standard VR fare, with the grip buttons used to brandish or holster the weapons and the trigger used to activate them.

The B and Y buttons extend the magical beam, and the A and X will retract it. I’ve not seen this particular aspect of the control method before, and it’s surprisingly intuitive.

As a matter of fact, the animation and feel of moving Haru around the environment are possibly The Tale of Onogoro’s biggest successes. There’s an excellent sense of weight and inertia, and the way Haru jumps onto the stone and hangs on for dear life as soon as you latch onto it gives her a lot of character.

Almost all of the game’s puzzles start by moving the quelling stone, with Haru aboard, to a glowing blue ring somewhere in the level. She’ll then press a button to begin a sequence of events that must be ‘solved’ to advance to the next area.

The puzzles are generally pretty simple. Ostensibly, they are elemental in nature, but many simply boil down to ‘shoot the green baddy with the green magic’. A layer of complexity is added by the inability of weapons to retain more than one magical charge, so magic must first be absorbed from particular glowing rocks. This is a clever way of preventing the game from devolving into a shooter. Still, it doesn’t really add much except the addition of another step to the entirely linear process of completing a puzzle.

By the halfway point, Onogoro adds elements such as paper spheres that can be burnt or blown around the level, rotating chutes that guide objects, and machines that Haru can interact with to manipulate puzzles and damage bosses. Unfortunately, these are all slotted into the same puzzle structure as other elements. Much like a Domino Rally set, no matter how fancy it may at first appear, in the end, all you’ve really achieved is knocking over the next piece.

Through Haru’s often lengthy exposition or the game’s marketing material, you will be told that the alternate world of The Tale of Onogoro is of the steampunk variety. The game’s bosses, the ‘Incensed Kami’ terrorising Onogoro Island, have mechanical appendages, and many of the game’s levels occur in purportedly industrial areas. Haru herself has ‘absorbed steam powered’ parts to repair herself after apparently being tortured by Masatake.

However, the cell-shaded art, usually a personal favourite style, completely fails to convey a steampunk atmosphere. This is mainly due to the primary colours of its palette, which makes buildings and machines look more like toys from a giant wooden play-set than retro-futuristic pneumatic behemoths.

The Incensed Kami are the exception to this. They are massive and each more spectacular than the last. The battles themselves offer a little more creativity than the rest of the game, which is welcome, but there are only five such battles in the whole experience.

The sound effects, too,  are pretty basic and fail to add any weight or atmosphere to proceedings. Still, the music, albeit predictably traditional pan-pipes and percussion, is charming.

The VR gamespace is fairly cluttered with puzzle games looking for a way to stand out. Onogoro’s USP is Haru herself, a character you are supposed to build a bond with as you progress through The Tale of Onogoro.

In this endeavour, Takahashi-san has obviously been influenced by the PS2 classic Ico, and it shows in parts of the puzzle design too. In fact, various members of AMATA K.K. have been involved in the making of Ico, The Last Guardian, and even Shadow of the Colossus. Unfortunately, Onogoro and its characters fall a long way short of their inspiration. AMATA are also the studio responsible for Last Labyrinth, a game that Doc Neale also had issues with when he reviewed it.

To come back to my opening remarks about ‘Show, don’t tell’, Haru launches into lengthy exposition at the start – and end – of every section in the game. She tells you how she’s feeling, tells you what the area ahead represents, tells you about her history and that of the island. She often repeats herself and is never given even the slightest visual aid. She stands in front of you, hoping to build life into the game’s environments and characters by waving her arms around woodenly and… speaking… very… slooooowly. It’s disastrous for the pacing of the game and fails in its attempt to make up for the dearth of atmosphere in the lacklustre visuals.

I Expect You To Die 2 | Review

By far and away, the biggest problem with The Tale of Onogoro is the price. At $29.99, it’s priced near the top end for a Quest game – and it falls a long way short of offering much value for that cost.

You’ll clock in about five hours of play (and what feels like 50 hours listening to Haru). The Tale of Onogoro does have time targets and optional objectives to encourage replay, something of which I am usually a huge fan, but they do not provide enough motivation to replay a game that offers so little satisfaction the first time around.

If you’re looking for an original, straightforward, and narrative-heavy puzzle game, there are worse options available on the Quest (Rhythm of the Universe – Ionia, I’m looking at you), but this really is damning with faint praise.

The Tale of Onogoro is far from the first game to suffer from a disparity between gameplay and story. In fact, it’s a constant challenge in the medium that only the very best games even come close to getting right. Still, here it’s taken to a whole new level by offering its narrator nothing through audio or visual assistance to convey its story. As a result, you’re left staring into Haru’s lifeless eyes as she delivers a lifeless story about a lifeless world.

Were the puzzles challenging or creative, this may have mitigated the damage, but they’re rarely better than average in both regards.

In the end, Onogoro is so overburdened with spoken exposition that it completely destroys any goodwill a player may have towards its better elements.

At its best, Onogoro feels like Portal 2 at its worst. This may seem like high praise but think back to those times in Valve’s sequel when you were looking for one single panel to shoot with that one specific colour to reach that one particular goal, and you’ll remember that this is nothing to be proud of.