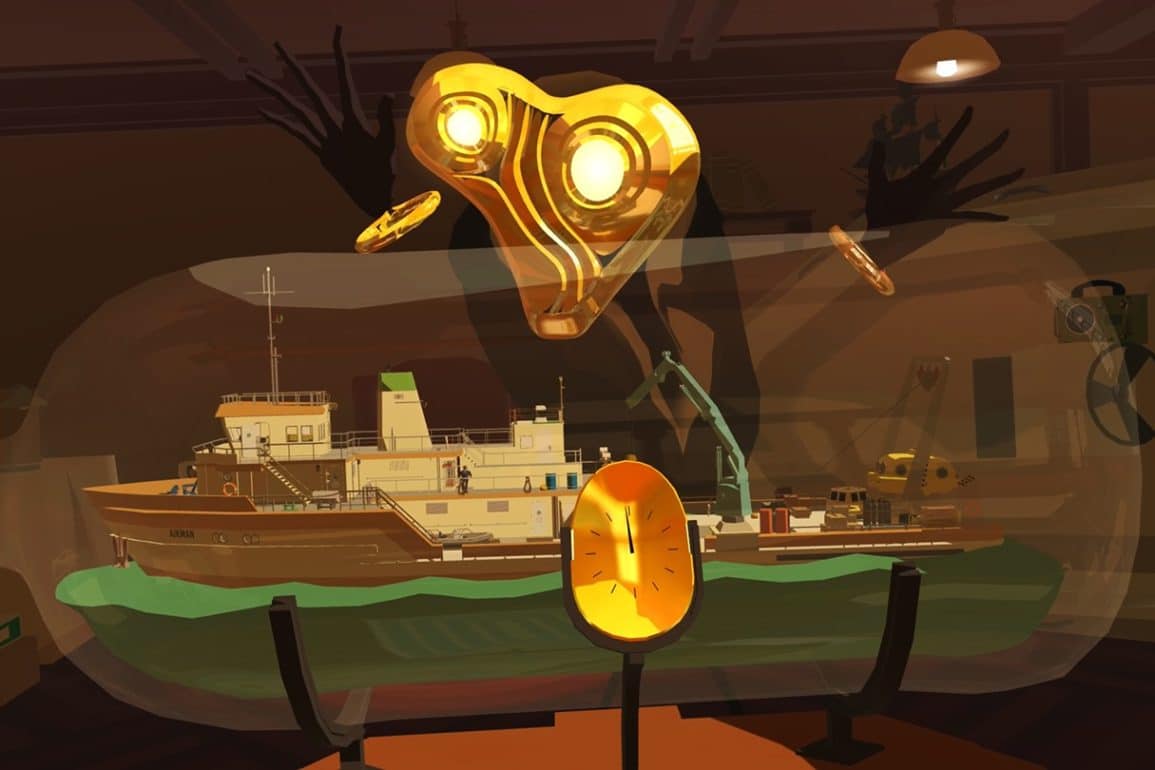 The Under Presents | Review

Here you are, and there’s not much to say, except maybe you’re dead, but you could well be alive. Perhaps we’re all here in the dark hoping to find a way to the sun. Time, after all, moves one way, and not the other, unless you use your mask. Then, of course, it gets tricky. You can make onions, you can make sushi, and try to save a few ocean-bound souls from the fate that awaits them in the frozen wastelands to which they’re headed. Meanwhile, allow us to entertain you with fresh music, cool fish, and the occasional giant skeleton. It’s The Under Presents, dear friends, and we’re all just here to have a good time.

What Fresh Hell Is This?

When The Under Presents starts, you’re in a dark muddy wasteland. Mysterious magical goo covers your hands, as though you might’ve risen from the dark mud beneath you, and you learn that you can snap off the mud, revealing your hands under the goop. Two bracelets later, you’re taught how to use the game’s unique method of movement, referred to as scrunching. This involves your ‘pulling’ the landscape towards you and having it wobble over to you in a somewhat elastic fashion. It’s a quick, smooth movement system that feels organic and natural, and one which I urge other developers to steal shamelessly.

You’re never quite sure what’s going on with The Under Presents. I’ve been playing it for days, and I’m still not entirely sure what’s going on. If this worries you, you might not be who Tender Claws had in mind when they developed this game. Much like Virtual Virtual Reality, The Under Presents is a unique Virtual Reality experience purposely engineered to mess with your mind in the most pleasant way possible.

Game? Play? It’s Both and More.

You’re not so much given a mission to complete (you are, but more on that later) as you are a world to explore. You travel from the murky dark world to a desert of sorts, only it’s a desert with ruins. A destroyed building here, the remains of a downed ship, some rocky ruins, an apparently old plane fuselage, etc. They all seem to be remnants of some past events, and they all hold some kind of mystery. At the center of desolation is a small theater that wouldn’t look out of place in a well-worn Vegas hotel. This is where you get to watch some music bands performing on the stage, it’s also the game’s lobby where you’ll likely run into other players. It’s also a place where you’ll learn quite a few things before you then find yourself teaching them to newcomers.

The Gerald of Doom

The Under Presents isn’t just about exploring the game world, at the heart of it lies a story, and a mystery, and a mission. Remember when I mentioned ocean-bound souls? Well, they’re on a ship called The Aickman.

You’re introduced to The Aickman, which is kept in a bottle, by ‘The Under’ shortly after you begin your playthrough. You can return to it whenever you want by using your mask in any of the photo booths liberally littered around the game world. When you do so, you get to follow around a cast of 10 characters through three acts and an epilogue. You can access any of the three acts straight away, but you’ll have to work your way through them before you can experience the epilogue.

Gerald is a dolphin, and if you’re familiar with the work of Douglas Adams, you shouldn’t be too surprised at how important he turns out to be. All of the characters have their own stories, and you can choose who to focus on by following them around. With your mask on, you’re on the ship, experiencing the events occurring on it in real-time. Your mask is, apart from your hands, your most valuable tool.

Carrey My Mask, Will Ya?

In the game world (as distinct from the story world), taking your mask off allows you to perform spells, with a combination of finger-snapping, object manipulation, and hand gestures. Your time manipulation powers don’t control the world’s time as they do in the story world but can reverse time per object.

In the story world, taking off your mask allows you to control time, winding it backward or forwards. This enables you to speed the story up as you watch the characters fast-forward their way through it. More importantly, it allows you to get to navigate through time to important plot points that you can learn how to influence.

The Love Boat Promises Something for Everyone!

When you first encounter The Aickman, it’s fate is sealed, and all the passengers are doomed. As you watch the play/story, occurring throughout the ship, and around it, you’ll get to know the whole cast of characters. They’re an interesting lot, and they have a lot of conversations that are written well enough to maintain that interest. You’re an immaterial ghost on the ship when you have your mask on and don’t seem to be able to do much other than watch as they die one by one. You watch one couple get romantically involved, and you watch as another couple struggles. There’s a man who waxes philosophical about time, fate, and free will, and, if he were sane, perhaps he’d have been more useful.

This theatrical performance gets gamified when you start learning how to influence the characters, and by doing so, affecting their fates. In most cases, this involves solving surreal puzzles happening in surreal environments, a dreamscape of their minds.

The Under Presents utilizes the Quest well, playing to its strengths and surprising its visitors in many ways. The graphics are stylized but exceptionally well directed and drawing from a diverse palette. It’s colorful and pleasant, sometimes beautiful, and occasionally disturbing, haunting, or creepy. The sound effects are sparse but not lacking, everything has a tactile feel with great use of haptics. The world around you is interactive, you can hold things and play with them, and even in the story world, while in ghost form, you can interact with ‘ghosts’ of the objects around you. You’re never made to feel detached from the game.

One of the game’s unique features is the many performances it hosts, and which you can witness in the main Vegas-like theater hall. There are around ten performances that loop, but the main stars are the live performances that sometimes take place. Since launch, and until March 2020, the game features live actors who enter the game world and interact with regular users. The first time this happened to me, it took me by surprise. I thought I had been interacting with a scripted NPC but quickly realized this was a real person. The presence of real actors engaging in real-time provides a crisp edge to the title. It really does feel like a game-changing innovation in virtual reality entertainment.

Hey, Buddy! Can You Spare a Spell?

The Under Presents handles its social aspects with some trepidation, allowing you to join a consistent online world but muting you in the process. Although limiting your communication to gestures and snaps, this still doesn’t detract from the quality of engagement and can result in meaningful interactions. At some point, I found myself faced with a task that I could not accomplish on my own, so I recruited another player from the nightclub. They dutifully followed me to some ruins in the desert, and I gesture-explained what we needed to do. Then we both cast our spells simultaneously, restoring some ancient ruins to a usable form. This kind of interaction is commonplace in The Under Presents, and it’s absolutely delightful.

It’s an Open Smile on a Friendly Shore…

There’s no killing in The Under Presents, and the closest you get to platforming is when you’re teleporting across shipping containers to read pages out of a book. There’s no upgrading your weapons, and there’s no working out the best loadout. It has puzzles and motivates you to solve them without demanding that you do. The Under Presents doesn’t make you want to beat it, as much as it’s asking you to enjoy it and to get involved in it. It wants you to bask in its weirdness, to explore its surreal locations, and to play around with it in the hope that you’ll discover more of it.

These Violet Delights Have Violet Ends

I was (and remain) very impressed with The Under Presents, it’s a worthwhile and rewarding experiment in new genres of virtual reality entertainment. It includes a narratively strong puzzle game but is not just a puzzle game. It’s thoughtful, joyful, playful, and engaging. A title that can only disappoint gamers who demand that games conform to their expectations, The Under Presents is one of the best things I’ve ever experienced while wearing a headset. If we had some kind of accolade for exceptional titles, it would breeze past and grab it.

The Under Presents
TLDR : Summary
A title that can only disappoint gamers who demand that games conform to their expectations, The Under Presents is one of the best things I've ever experienced while wearing a headset.
Concept
9
Gameplay
8.5
Graphics
8.5
Audio
9
Longevity
8
User Rating9 Votes
9.1
Pros
Truly unique gameplay experiences
wonderful art direction
great and varies performances
Cons
Real actors only there for a limited time
9
Fantastic
Get it on the Oculus Store
The Under Presents