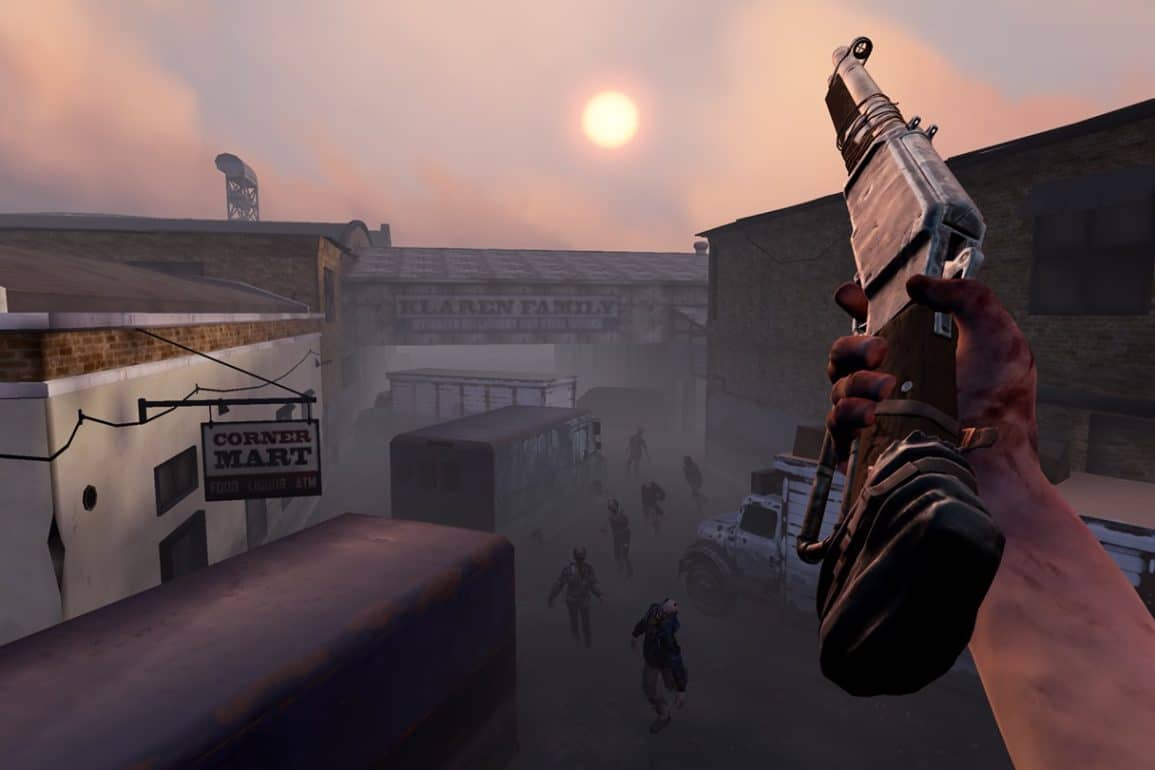 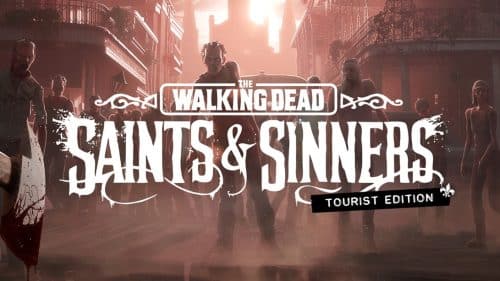 The Walking Dead: Saints & Sinners is a recent entry into a franchise that’s an excellent example of something becoming a shuffling, rotting victim of its own success. The Walking Dead comic books and TV series, and the beloved episodic Telltale videogame, were well-made and interesting. However, overexposure and too many licensed spin-offs, of varying and usually poor quality, have dulled its draw and impact. Will Saints & Sinners breathe new life into an otherwise decomposing IP, or does it need stabbing in the head to put it out of its misery?

The Walking Dead: Saints & Sinners is set in New Orleans after the zombie plague has struck. There’s a ragtag civil war happening between two factions, the authoritarian Tower and the rebellious Reclaimed. Both sides are searching for the key that will grant access to a fabled military vault which is, supposedly, filled with weapons and ammo. The player assumes the role of an outsider, known only as ‘the Tourist’ and yet to take sides, who’s struggling to stay alive and make a difference. And that’s as much as you’re getting from me story-wise because anything else would be spoilery. Apart from some easter eggs, there don’t seem to be any overt ties to either the comic book or television universes of The Walking Dead. However, I’m not an expert, so feel free to correct me in the comments if you know otherwise.

It’s a narrative first-person survival-exploration game with role-playing elements and an ambitious one for VR. Unlike the glorified shooting galleries of fellow VR zombie games like Arizona Sunshine and Death Horizon, this is a full-fat, open-ended experience. The Walking Dead: Saints & Sinners is more interested in story, exploration, and crafting than being solely focused on ‘headshotting’ the undead. It wants to give the player a long-form and satisfying adventure akin to something you might find in flat gaming, and this is depressingly rare on the Quest at present.

Don’t worry, though; at the heart of the game is still a massive amount of visceral carnage.

After a scene-setting and mysterious intro, there’s a breezy and enjoyable tutorial section which deals with everything you’ll need to get started and acts as a perfect microcosm for how the game plays. However, it barely hints at how involved the game can actually get later on. But you’ll come out the other side raring to get started, and with all the understanding you’ll need to do so.

What is immediately apparent is how tactile everything is. This is a title that has been designed for VR, with a physics system intended to add a bit of convincing heft to things that can otherwise feel a little floaty and unsatisfying. Every object and weapon in the game has a different weight. Pick up a breath mint, and it’s light as air. Pick up a plank of wood, or a lump-hammer, and your virtual arms will be slower to drag them around, and you’ll need both hands. I’ve seen this in other titles, but the potential problem is the disconnect between your real and virtual movements. The Walking Dead: Saints & Sinners is really nicely honed, though, and after a short period of adjustment you find yourself meeting it halfway and matching your movements to your virtual avatar, effectively pretending to take the weight of a weapon or item. It works really well and actually adds to the sense of immersion, and this is particularly pleasing in the feel of melee combat.

GORN OF THE DEAD

Zombie heads are there for popping. We all know that. But The Walking Dead: Saints & Sinners takes it a bit further. It dares you to take the fight to them, armed only with a knife or a broken bottle and a sense of bloodlust. As an undead arsehole shuffles towards you, you can stab them in the head with a quick, decisive movement before they have a chance to grab you. Your weapon of choice meets soft flesh and then bone, and you have to use your other hand to help you shake or pull it free of the head when the zombie crumples. It is not for the faint of heart or squeamish. It makes you feel feral, somehow, like you’re going to take the headset off and find yourself covered in actual blood splatter. It’s ghoulish and grim, and it’s great. You’ll find yourself channelling Darryl or Michonne pretty quickly, your face set in a serious grimace like you’ve seen some things, man.

The handguns are OK, and work as they should. Shotguns and heavier weapons are pretty rewarding to use. But the sheer physicality of the melee combat is where it’s at, and it never gets old.

THE HOUSE OF THE DEAD OF THE RISING SUN

So that combat is great, but what of the rest of it? Well, that’s fantastic too, frankly. The setting is brilliant, infused with the atmosphere of a stylised New Orleans. The city is split into different levels, which can be visited in any order once you complete specific objectives. Game time is divided into ‘days’, and as the narrative deepens, you must decide how to spend them and where to go. Will you forage for supplies and crafting materials? Or will you press on with the story? As you fall into your improvised bed at the end of every gruelling day of survival and exploration, the screen fades to black. It displays the sombre message ‘Supplies have dwindled. The dead have grown in number.’ The water is rising, and war is brewing. There’s a sense of entropy, of only just scraping by, that offsets the rewarding combat and gives an all-pervading whiff of unease to everything that happens.

The tone is reminiscent of the more recent Fallout games, in a good way. This is partially down to the familiarity of sneaking and looting in dystopian remnants of recognisable places. It’s also because of the superb soundtrack by Michael David Peter, which is definitely redolent of Inon Zur’s work on Fallout. The infusion of swirling Hammond organs and dreamlike trumpets does much to crystallise the Nawlins setting, and the sound design overall is excellent. Put on some decent headphones, and you’ll be completely immersed in these grim, half-lit streets.

Rather like other entries in The Walking Dead ouevre, the story of The Walking Dead: Saints & Sinners is mediocre but well told. The acting and dialogue are solid. In presentation and storytelling, it’s definitely attempting to channel the style of the comics and Telltale’s game; characters are rendered in a cel-shaded, stylised manner, and there are moral and story choices to be made which alter how things pan out and how people treat the Tourist. The quests and side quests are interesting enough and do a great job of pulling you through the world. There’s always something to be doing, and not quite enough time to do it all in. For the most part, it’s a thoroughly well-made and addictive experience which is definitely one of the most involved and long-lasting experiences on the Quest.

There are a couple of bugbears, though. First of all, is the way that conversations are handled. There are many instances of dialogue in the game, which are interesting enough. But the player is left with very little to do to stand around and listen, occasionally pointing at a dialogue choice. When the action and exploration in the game are so good, it can be galling and boring to just hang around whilst the next bit of exposition or character-building plays out. This is most keenly felt in the regular conversations with a guy on the other end of a radio set-up at the Tourist’s base. You can’t move away from the radio, or the conversation stops. SO you can just stand there, looking at the microphone and playing with a bobblehead statue, for up to ten minutes at a time. It might be cliche, but this is why game protagonists tend to wear headsets or have walkie talkies; we should be able to get on shooting or crafting stuff while being invested in the plot. I’m a man of words and am interested in the story, but even I was tempted to skip conversations in this game.

Another gripe is the slight lack of variety and imagination in level design. The game promises much earlier on about climbing and exploration, which is there but never quite fully reaches its potential. There are lots of bland streets, and too many vans and lorries conveniently funnelling the player around them. This does mildly dampen the thrill of exploration.

I’m not too impressed by the AI of human characters either. It’s OK for zombies to be idiots because they’re dead. However, don’t expect me to care about NPCs in a story if they’re either too dumb to see I’m stood next to them pointing a crossbow at their temple, or if they spend all their time on suspicious high alert when I’ve just helped them out. It takes a little of the edge off of the player’s investment in both stealth and consequence.

The Walking Dead: Saints & Sinners is not without its faults, then, but it’s churlish to have too much of a go at it when it’s merely aiming higher than most other VR games. It also squeezes a lot from the relatively modest abilities of the Quest. It’s a mostly polished triple-A title with vast amounts of atmosphere, an impressive and immersive engine, and great gameplay. If you are hungering for brains, brawn, and longevity from a VR game, it will satiate you and provide you with everything you’ve been craving.