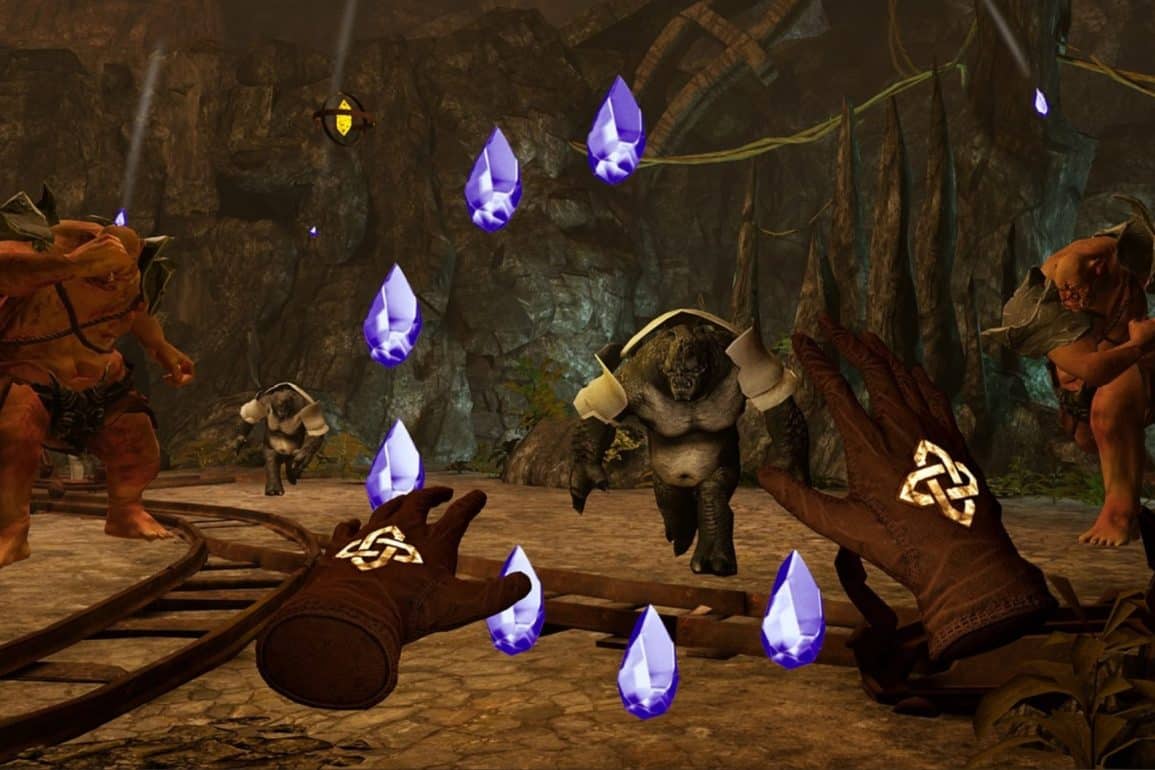 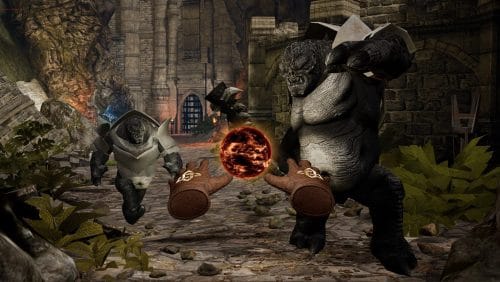 The Wizards is a combat RPG, centered around spell-casting. The initial spells are unlocked pretty quickly, and from then on, you specialize your skill-set based on your play-style; you can make fireballs with the flick of a wrist, and wield force-lightning with a two-handed punch. Unfortunately, the game fails to build from there. Every level is just a set for wave-based enemies. You do get to explore and navigate relatively vast levels, but they’re pretty empty. Teleportation lets you speed past it if you get impatient. Most of the game actually isn’t accessible by way of thumbstick movement; you can’t jump, and you can’t fall off ledges. A lot of this game’s traversal involves stepping stones that you lock-onto; this was actually quite helpful, because the levels have very few landmarks, and it’s easy to get lost without the developer showing me precisely what cliffs are meant to be scaled.

All of the game’s story is told by a narrator, who’s both crucial to the world and completely absent. There aren’t any NPCs to meet, or any eyes to look into.

You can grab loose objects in your apartment, or out in the world, but there aren’t any physics interactions; outside of the spell-casting, there isn’t much about the game that’s inspiring. The spells each has a different aiming mechanic, and the fireball, the first spell you learn, is aimed with hand speed, direction, and head rotation. Late in the game, you can similarly throw spears; if you give your wrist a flick, it’ll sail forward like a spear. I would’ve also played more of the game with the bow-and-arrow, but casting it takes a lot of time, and it takes two hands to aim, which is quite the task when you’re also using your thumbsticks to strafe and teleport.

The spells are all relatively well-conceived, but horribly imbalanced. Force lightning is a simple motion, and it has the highest DPS, so I used that whenever possible. The only times I needed to change it up were when enemies had elemental shields, or when they were too far away to zap. Aiming fireballs and shooting arrows is exhausting, compared to lightning’s continuous damage, which you can eventually point in two directions at once.

The Wizards has elastic difficulty, only tied to a score multiplier, so you can dial down the difficulty of any level and one-shot every enemy. I can imagine fewer people would complete the game if they didn’t offer the option to breeze past the more frustrating fights. There aren’t many hooks in The Wizards, and because you don’t need to commit to branches on skill trees, you can test out all of the upgrades early on. The first hour or two would be a really satisfying intro to VR action-games, but everything that this game does right is spent by the end of the first world.

The story is tell-don’t show; meaning the events are all unseen, (save the boss battles.) There’s nowhere to place emotional investment, and therefore no stakes, besides time wasted. The game is filled with initially exciting interactions that quickly lose their appeal because of repetition. None of your choices matter and the game is labyrinthian. The only human voice belongs to a patriarchal wizard who is unquestionably in-charge; is the player even the hero in this story? The developers didn’t think the story through too deeply. It’s a high-fantasy good vs. evil narrative that only exists to justify a monotonous wave-shooter.

Unfortunately, The Wizards is an uninspired slog. If you’re looking for a wave-based action game, Sairento by Mixed Realms is almost half the price and twice as deep.