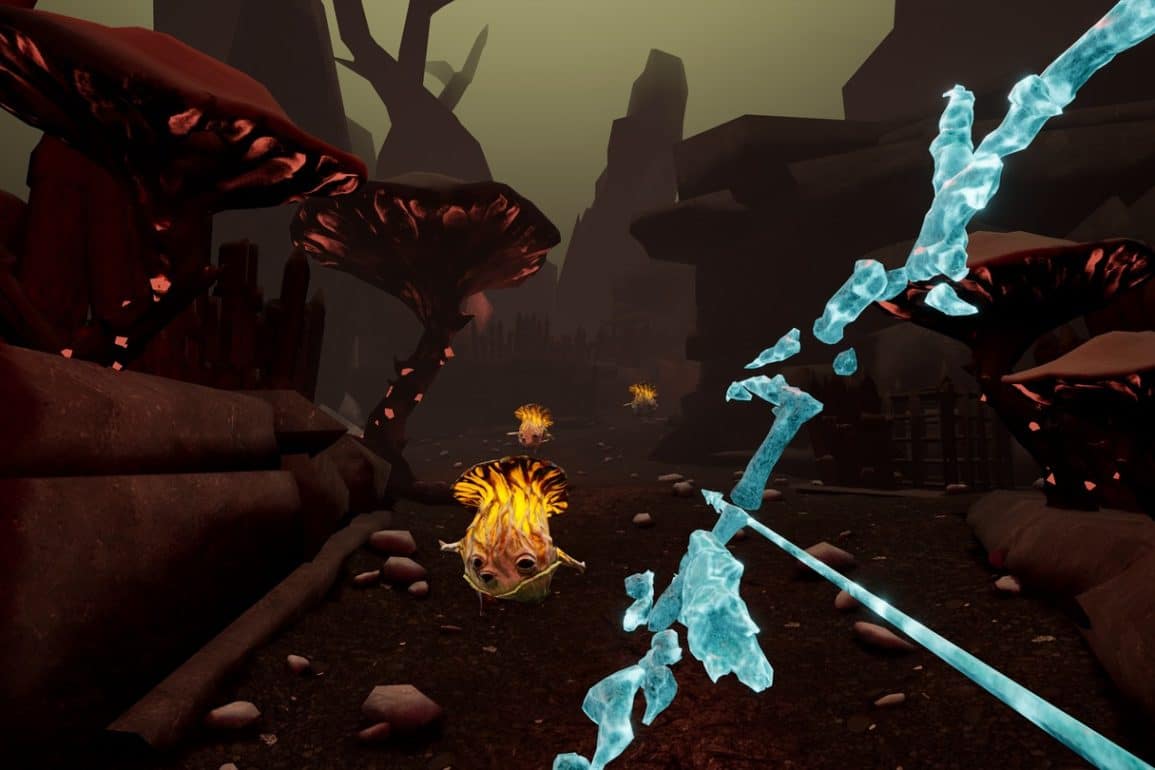 Got Spells, Will Cast 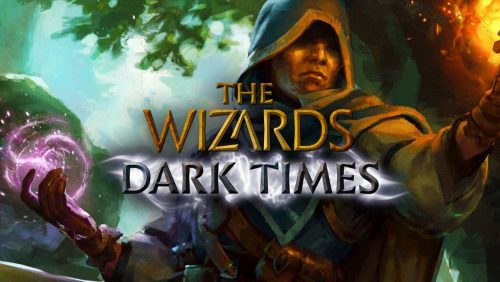 You may be interested in what The Wizards – Dark Times has to offer if, like me, you feel that action in VR has more potential than just running around shooting guns. Following up on the moderately successful original, The Wizards developers Carbon Studios are back again with their signature gesture-based spell casting to see if they can conjure some magic the second time around.

Will they succeed in casting a spell on gamers this time around, or will The Wizards – Dark Times prove to be nothing more than a charlatan peddling a cheap bag of tricks. Before we take a look, nothing up my sleeves..hey, presto.

You shall not pass!

The Wizards – Dark Times sees you play the role of (you guessed it) a wizard! Set in a fantasy world called Meliora, Dark Times continues the players’ journey as the unnamed mage from the first game. You again play accompanied by the overtly glib and entirely formless Aurelius, the dryly sarcastic narrator from the first game.

Don’t worry if you haven’t played the original; there’s nothing so in depth and convoluted within the plot that you would need a refresher course. Essentially, there is evil magic afoot, and it’s up to you to stop it. There is more to it than that, but at the same time, there isn’t really. After a reasonably short amount of dialogue-based exposition, the player sets about traversing the corrupted lands of Meliora to undo the effects of the dark magics that have beset the land. It’s not getting complicated, and you know what? That’s fine by me.

As far as the broad strokes of gameplay go, The Wizards – Dark Times is no different to the likes of Star Wars: Galaxy’s Edge or Warhammer: Battle Sister. The player is treated to a bit of dialogue, leading to a light puzzle or a combat set piece. Rinse and repeat.

Although it’s not ground breaking, there are a few nice touches throughout that mix up the gameplay. I particularly enjoyed the level where it constantly rains, rendering your primary fireball spell completely useless. There’s also a level that forces you to play one-handed, limiting the spells you can use and forcing you to change your playstyle considerably. It’s a fun way to add a little variety.

Dark Times sets itself apart from these other narrative adventures (and in some ways surpasses them) with unique spellcasting mechanics.

The combat in The Wizards franchise is unlike any other game on the Quest and is utterly joyful to play. You’ll learn 11 spells throughout the game. These have you summoning magical weapons and mastering everything from fireballs to lightning blasts. There are six core spells, each triggered by their unique gestures and an additional five empowered versions of these core elements.

The gestures are responsive, intuitive and fun to use. The spells themselves are different enough in range, damage and effect to make each of them useful depending on the situation. Combat gets even better once you get a bit of confidence with the mechanics and find yourself launching combos, strings of gestures that run on from each other, leaving a trail of magic in your wake. It’s some of the most fun combat I’ve had in VR and had the other elements of the game been executed at this level, it would’ve become one of my favourite games.

My only complaint on this front is that one spell, in particular, feels a little overpowered. I avoided using it unless absolutely necessary. However, if you wanted to, you could simply spam this spell and basically walk through the rest of the game.

Graphically, the Quest version of The Wizards – Dark Times attempts to replicate the look of its PC counterpart but unfortunately misses the mark on many vital points. While the environments provide a fair representation of a mythical fantasy world, some distracting technical issues occur throughout, sadly detracting from the gameplay. Most notable is the way that assets pop in and out of existence. This happens with annoying regularity, and although not game-breaking, it does break the immersion considerably.

Additionally, the visual effects accompanying magical attacks and some general background ambience sounds are slightly flat and underwhelming. This is particularly evident as you cast the fireball, essentially the player’s primary weapon. It’s hard to describe, but something about it looks off – like a 3-dimensional effect has been misaligned around a 2-dimensional circle.

It’s pretty disconcerting, and I found that I had to force myself not to look at that particular spell to get immersed.

The lighting is also a bit inconsistent, with the fireball spell lighting the way in some areas and disappearing sadly into the void in others. Similarly, objects, enemies, and pathways seem to appear out of a poorly executed gloom that seems to exist for no other reason than to reduce the number of assets rendering at any given time.

That said, there are some areas and effects which look quite good. Overall it’s not terrible, but compared to games like Galaxy’s Edge, which has some similarities in scale and outdoor aesthetic, the world just lacks the polish and depth that the Quest is capable of delivering.

The audio in The Wizards – Dark Times serves as an entirely adequate complement to the gameplay. The enemies each have their groans and grunts to indicate their presence nearby, and the spatial audio filters these sounds to the player well enough to get a feel for what’s happening around you. That said, there are such a limited number of enemy types that I feel like a bit more effort could have gone into their sound design. It’s all perfectly acceptable, but I can’t help but think that a bit more character and variety in the enemies’ sounds would have gone a long way to adding some more tension to the moments in between the combat. It may even have added some more depth to the experience whilst in battle as well.

The music plays its part in deepening the atmosphere, with grand crescendos escalating as combat ensues, only to fade away to indicate the last of the threats has been vanquished. Outside of the ebb and flow of battle, the music occupies a supporting role, adding just enough to prop up the atmosphere without becoming intrusive. It’s hardly the highlight of the game, but it serves its purpose.

I’m usually not a fan of the “quipping for quip’s sake” style of narrators in games, but it works well in The Wizards – Dark Times. This is in no small part due to the quality of the voice acting. It’s rather good, and although there are only three speaking roles in the game, they are all performed admirably.

The Wizards – Dark Times is (at release) a single campaign with a finite beginning and end. Personally, it’s hard to give an accurate run time for Dark Times given how many hours I’ve spent in the PCVR versions arena mode. As a result, I breezed through my playthrough in just over 2 hours, only dying once. But it should be noted that I did that by bypassing the games natural learning curve, having already become widely proficient in the games magical combat.

My first outing with Dark Times took me somewhere between 4-5 hours to complete, and as the Quest version seems to match the PCVR in level design, enemies and content, I see no reason that this game should clock in below 4 hours for the average player. If, however, like me, you’re an experienced spell caster, expect to blast through it swiftly.

With only six enemy types to go toe to toe with and two relatively mild difficulty settings, I can see that many people will put this game to bed after the first play through. I cannot stress what a shame this would be. The combat is so much fun that it begs for an arena or a roguelike mode. Well, the good news is that this is on the cards, with Carbon Studios not only working on delivering an arena mode for the Quest but a special Co-op arena mode featuring new enemies to boot!

I can only score the game on the content available as it launches, but when multiplayer arena mode lands, in the immortal words of Arnie… “I’ll be back”.

The Wizards – Dark Times is a narrative-driven adventure game that offers a unique spin on the oversaturated shooter genre. Rather than taking on your enemies with traditional weaponry, Wizards introduces a gesture-based spell casting system that is unique, intuitive and refreshing to play.

The game suffers from a few technical issues which hold it back from excellence. But, the ability to throw magic around to dispatch foes instead of the current endless barrage of pew pew is more than enough reason to give it a try. As it stands, it’s a perfectly solid way to spend a few hours, but when the promised co-op arena lands, The Wizards – Dark Times will come into its own.

The Wizards – Dark Times offers a distinctive, magic-themed adventure that leverages classic gameplay tropes against an innovative and intuitive gesture-based spell casting system. It’s not perfect, but it’s different from just about everything out there and worth the price of admission just for that.

The Wizards - Dark Times
TLDR : Summary
The Wizards - Dark Times offers a distinctive, magic-themed adventure that leverages classic gameplay tropes against an innovative and intuitive gesture-based spell casting system. It's not perfect, but it's different from just about everything out there and worth the price of admission just for that.
Concept
7.5
Gameplay
7.5
Graphics
6.5
Audio
7
Longevity
6
Pros
Satisfying, responsive gesture-based spell casting
Unique combat system
Good voice acting helps sell the narrative
Cons
Single game mode
Collectable items that serve no purpose
Limited number of enemy types
7
Get it on the Oculus Store
The Wizards - Dark Times