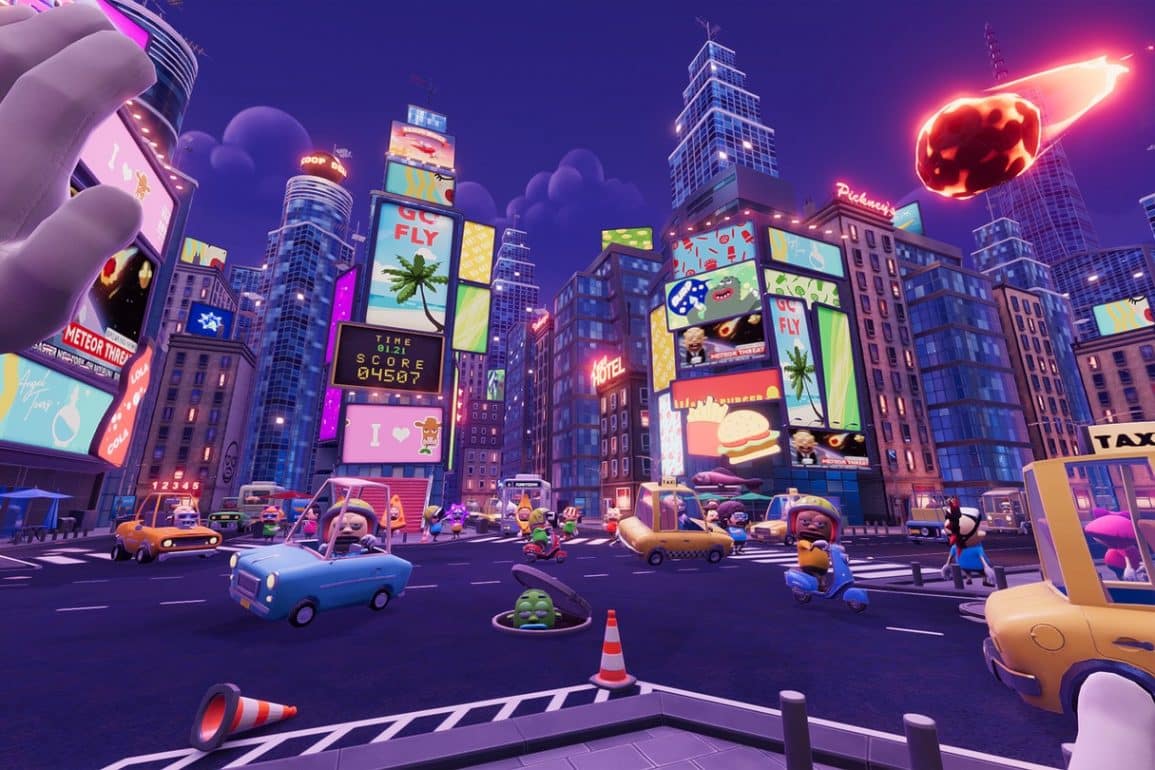 Directing Traffic and Holding Back Comets 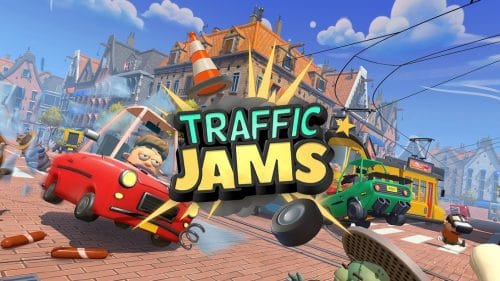 The game starts you off with a quick tutorial, and the controls are intuitive and straightforward. You use one hand to point at people or vehicles, and your other hand either waves them faster or palms them to stop. You can pick up odd items with your grip button, some to just play with, but others give you power-ups. You can play it standing up or sitting down.

Here I am, juggling traffic as best I can, two cars careening into their corners, a bus driver brimming with impatience, a damn bi-plane hoping to taxi off a street, and I hear a loud boom, and there’s a GIANT COMET IN THE SKY. I point at it, gesture it to stop, and it stops…

Well, for a while, at least, reacting as human drivers do when they get too impatient, it moves again and crashes a whole side of the street, surrounding the entire place with a cloud of smoke.

The game features Gouda, Paris, Amsterdam, Tokyo, and New York. You get a Day Mission, A Night Mission, and a Rush Hour mission for each of these. Once unlocked, these mission types appear on tabs attached to each city’s folder. The game’s difficulty is well-paced, and opening a map doesn’t always mean you’re ready to take it on. Aside from directing traffic, the game throws distractions at you; mosquitos that you have to swat away, aliens that you have to get run over or punch, and, well..comets.

Traffic Jams‘ soundtrack is light in tone, keeping with the mood of the game. The audio effects are good, but the positional audio seems a bit underused, loud enough to draw your attention once a crash occurs, but often too drowned out in the general din of it all.

If You Really Want A Challenge…

Like Acron: Attack of the Squirrels before it, Traffic Jams features asymmetrical multiplayer, and the VR player can play against up to four friends on mobile. Like Acron, Traffic Jams attempts to be a social and family game, a problematic premise in the days of Covid and Social Distancing. Like Acron, however, the four mobile players don’t need to be on the same wifi. Sure, the distance will introduce some lag, but the gameplay isn’t hurt much. Between the two, I found Traffic Jams’ VR experience more satisfying than Acron’s, but perhaps the opposite could be said of the mobile experience. The mobile players mostly pump triggers to unleash traffic and events; it’s not Fortnite.

Oddly enough, this whole multiplayer facet is almost hidden within the game. The press materials mention it, which is the only reason I knew where to look, but Traffic Jams doesn’t go out of its way to introduce the feature in-game or show you where to find it. I couldn’t access it until I noticed a little ‘MP’ tab in each city’s folder.

Similarly, the game is supposed to feature online leaderboards. If you figure out how to reach those, please let me know.

Traffic Jams is very close to the game it could be, but it’s held back by a few issues. The frame rate is choppy. I played the game on a Quest 2, and I could see the vehicles’ framerates dropping so severely that they were ghosting. I can’t imagine it’ll play any better on a Quest 1. The game also suffers from long loading times when starting a level or at the end of it. A rapid fix to make Traffic Jams immediately better would be to have a quick-loading retry/menu option at the end of each game. Again, I can’t imagine that this is any better on a Quest 1.

The other problem is Dennis, your little interactive ‘buddy.’ Dennis is annoying. It doesn’t help that I still can’t tell whether this is due to his incessant gyrations or a voiceover so overdone as to sound like racist parody. Dennis is mainly there to be spotted or gestured at during missions to fulfill some achievements. He’s like a Where’s Waldo that you’re forced to play during the game to get achievements and provides a few cutscenes that you can replay later if you’re a complete sadomasochist.

Despite some technical and UI design issues, Traffic Jams is an easy game to recommend and a great new addition to the Quest library. It’s got a fun premise and a light-hearted execution that challenges the player along a well-paced difficulty curve.