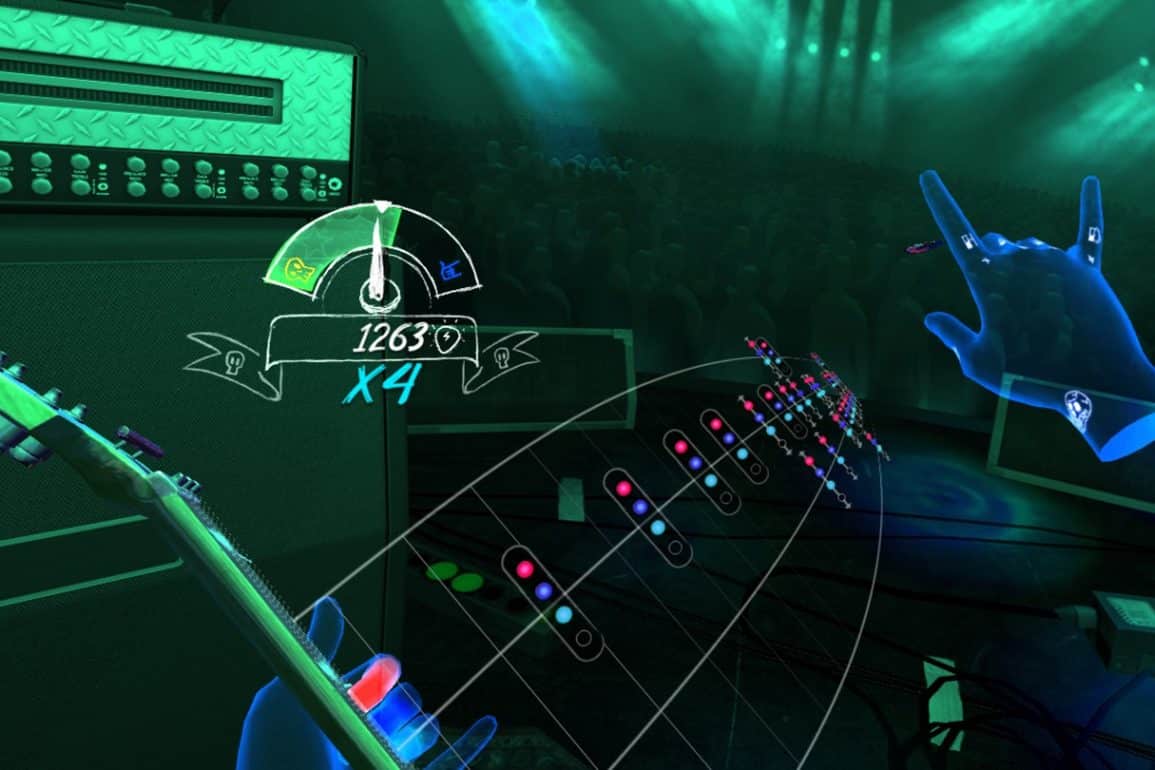 Hand Tracking Guitar? We Try It On! 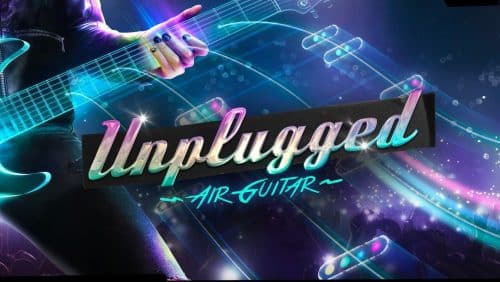 When Unplugged was announced a while back, with its promise of hand-tracked gamified air-guitaring, I was as excited as I was cynical. The concept was simple but cool, and relying exclusively on hand-tracking was gutsy, and getting picked up by Vertigo Games must’ve helped developers Anotherway open up more licensing deals. On the other hand, we’ve seen as many awful rhythm games as we’ve seen great ones, and hand tracking, although it’s made strides, doesn’t always feel tight enough for precision gameplay.

But Unplugged, much like a honey badger, doesn’t care.

What, Pray Tell, Is EDM?

Unplugged will undoubtedly come as a massive relief to the legions of rock fans who have felt ignored by the predominance of EDM and Pop tracks in games like Beat Saber or Synth Riders. Relax, brother. Here, you’re among friends. The game comes with 23 tracks, featuring bands like The Clash, Dandy Warhols, Garbage, Jet, Lynyrd Skynyrd, Ozzy Osbourne, Rush, T.Rex, Tenacious D, Weezer, and others. Chances are you already like some of these tracks and might have already air-guitared to them.

The lesser side of the presentation is your in-game ‘mentor,’ played with live video by Steel Panther’s “inimitable” frontman Satchel. Everything he says is, at best, idiotic, and at worst, somewhat creepy. Just like that, Unplugged made me less keen on having my son try it out and confident that I will never, ever, look up Steel Panther.

So let’s get on with it, shall we? Does Unplugged work?

Beam Me Up, Scotty!

Out with the big spoiler: despite some caveats, the hand tracking works. It works better than you might think it would, especially if you haven’t been playing around with Hand Physics Lab on Sidequest or App Lab. It rarely fails if you cater to its limitations, and it’s precise enough to tell how many and which fingers you’re holding against your virtual guitar neck. The game also tracks your other hand that’s doing the strumming, and yes, it has lefty options, so don’t..fret.

Unplugged‘s hand tracking does, however, come at a cost.

For Unplugged to work as it does, it requires you to pretty much stay in the same spot during a whole performance. At the beginning of a round, before you pick up your guitar pick to start the song, you can grab the guitar by both the tremolo bar and the neck to move it about to where you want to place it. Once there, however, you’re pretty much stuck to those spatial coordinates for the duration of any song. You can twist the neck about, but the guitar will pivot on its center rather than follow you around anywhere. For an activity geared towards wild abandon, it feels like a restriction. You also have to keep in mind that the headset needs to see your strumming hand as well. Raising the neck to eye level, a la Slash, for example, resulted in the game missing my strums.

Unplugged likes to switch it up, and the higher you go in difficulty, the more dextrous you’ll have to be. On easy levels, you’re mostly moving your hand across the different sections of the neck. As the levels advance, the shapes your neck hand has to make become more complex, and you also have less time to change between forms. It can be pretty challenging and quite addictive and, once you’ve grown confident enough to notice them, the combo rewards feel well earned.

The path ahead, it seems, is lush.

With the right music on, maybe a set of earbuds for better sound, and the right difficulty level for you, Unplugged can be a blast. Running up combos signals feels good, and the particle effects around the neck help pump that up. The ‘solo’ boxes that come during some tracks are a welcome and fun relief, letting you wiggle your fingers freely within a neck section for some extra zing.

What I Hate About You

For all the fun Unplugged can be, it sins on two main fronts, and for me, they’re not insignificant; agency and balance.

By not incorporating any negative sonic feedback into the game when you miss a note, Unplugged robs you of player agency. If messing up doesn’t impact the music in any negative way, then I’m not really playing, am I? Sure, when you miss, you see a red ‘missed’ text fly off the neck and some red skulls floating and disappearing like you’ve upset the combo counter, but the music, much like the badger mentioned above, doesn’t seem to care one bit. It marches on, unsullied by your incompetence.

If I were Satchel, I’d make up some joke that ended with a groupie saying, “Are you sure you’re in there? I can’t feel anything.”

If you’re a leaderboard player, Unplugged‘s other problem is that the scoring system, as it stands, is ridiculous. At the end of every song, there’s a crowd engagement section where you can get points for just flailing your hands around or making horns. You can get as many points for this as your entire run through a song might’ve scored. It renders the leaderboards meaningless and, for me, at least, unexciting.

This Judge Ain’t No Jury

Unplugged does many things right, has a great track-list, and the partnerships Vertigo Games are making indicate that they’re serious about its continued development. Unfortunately, Satchel’s part renders it somewhat delinquent, and a couple of design choices hold it back from achieving greatness. We only hope that future updates include adding negative audio feedback for missed notes/chords and fixing the leaderboards.

Unplugged
TLDR : Summary
Unplugged is fun to play, and an oasis for Quest players tired of EDM-based rhythm games. It proves hand tracking is viable but is held back by some design choices and a juvenile presentation.
Concept
8.5
Gameplay
7.5
Graphics
8
Audio
7
Longevity
7
Pros
Rock music!
Hand Tracking works! (Mostly)
Great graphics
Cons
No negative audio feedback means you're nobody
Satchel is annoying
Applause bonuses make leaderboards useless
7.5
Electric
Get it on the Oculus Store
Unplugged