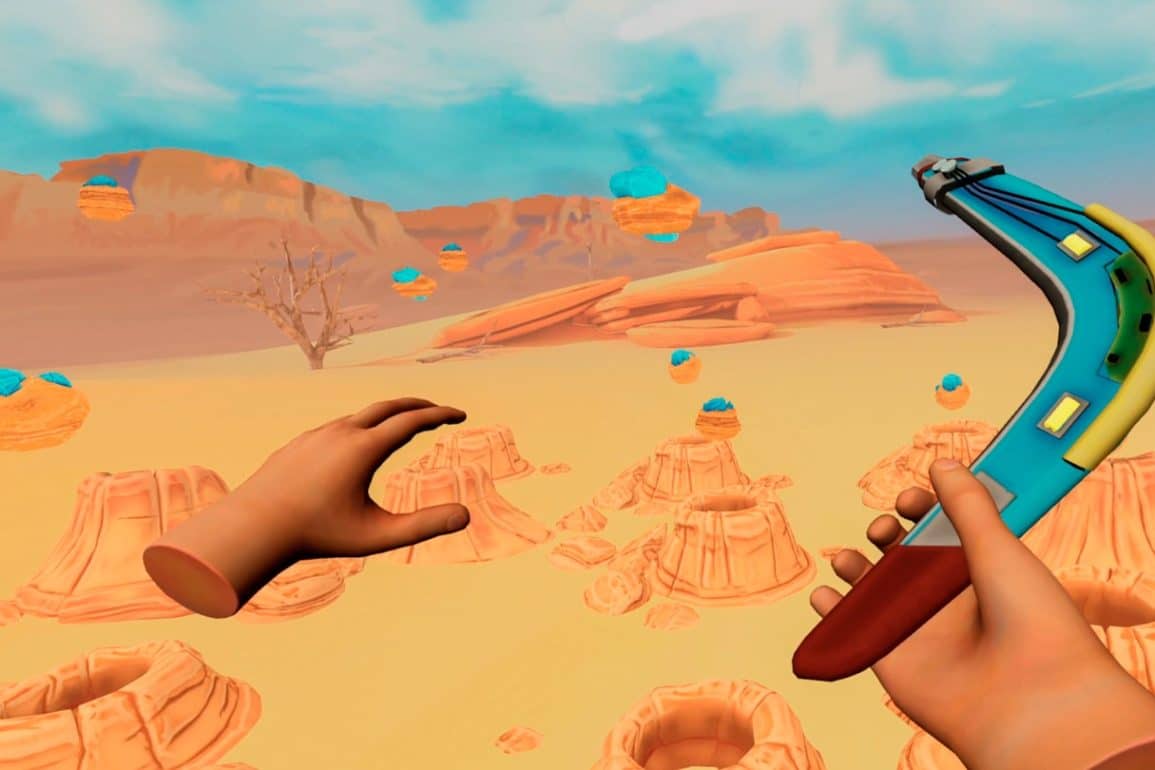 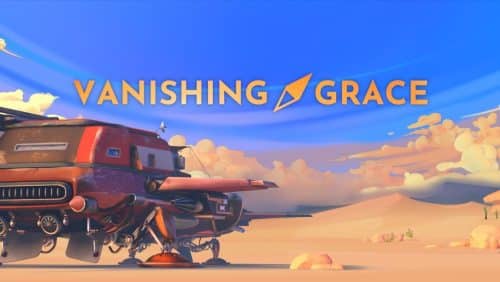 Vanishing Grace is a narrative-driven game that takes you on a journey through a future wasteland to find your best friend, Grace, who has gone missing. You’ll cruise across the barren Earth in your hovercraft, solving puzzles and trying to find your lost friend. The future is always bleak, and someone always ends up wandering off. Idiots.

It’s the year 2053. Wandering outside the Citadel’s safety (don’t ask where the Citadel is, how big it is, or anything else about it because you never find out) presumably spells certain death. But, as in all video games, we laugh in the face of death! Is this a journey you should undertake by ponying up some of your real-life cash and buying the game? Well, there’re some things we should discuss first.

You Got A Friend In Me

When Vanishing Grace loads, you’ll find yourself in an evening desert scene. There’s a campfire and what appears to be a souped-up Winnebago nearby. You’ll be treated to a cut scene. It starts off whimsically enough, focusing on a little girl and a paper airplane. But soon, ominous music starts and the girl holds out her hand, asking if you trust her. You run. She tells you not to look back. Of course, you look back. Yup, running was a good idea. You make it to safety, and the little girl implores you to never leave her. It’s actually a lovely intro that starts you off with pretty high hopes.

You then find yourself sitting in some sort of cafe. You have a multiple choice conversation with “Elena” through a walkie-talkie. Elena is your wifey, and she is pissed. You’ve had a fight because your friend Grace has disappeared, and apparently, you’re the only one who would bother to even look for her.

It’s heavily implied that your journey will be fraught with danger, but that doesn’t seem to matter. Nor apparently, does the fact that Elena is currently preggers. Nor that your relationship was already kinda rocky, and it kinda sounds like Elena was using the child to try to save the marriage..because that always works. The conversation’s weird and uncomfortable. As a player, you don’t really walk away liking either of these people very much.

All Aboard The “Fun” Train

After you endure the super cringey conversation with Elena, the screen fades to black. From there, “Day One” starts, and you find yourself aboard a hovercraft. It’s the same one that Grace used when she left the Citadel, and that returned pilotless. You’re out in the middle of the desert with nothing but sand, rocks, and a few dead trees to keep you company. There’s a cassette tape with your name on it. Playing it gets you some exposition from the now-vanished Grace. She explains that she was sick of her government job at the Citadel and wants to live out in the barren wasteland because that is her best life.

Then, the coolest thing in the game happens. You get a boomerang! I was super excited about this. I instantly flashed to Paul Hogan, all hyped up to indulge my inner Crocodile Dundee. I threw it and watched it arc out across the vast sandy expanse. I felt inexplicably cool as it returned to my hand. It was fun, it was novel, it was something that I thought could help set this game apart from other games.

Now, I have to pee in your cheerios.

Turns out the ONLY thing you will use this boomerang for is smashing floating blue crystal thingies that provide fuel for your hovercraft. I cannot fully express my disappointment. Breaking crystal thingies is fun initially, but it quickly becomes tedious. The boomerang arcs seem to follow some pattern, but they have nothing to do with any actual physics. There’s also no urgency to the crystal smashing. You can miss as much as you want. Your hovercraft just keeps on rolling.

I knew this was a puzzle/story-driven game. Still, I had hoped for at least some boomerang-related combat. You know, smashing some of those post-apocalyptic zombie creatures that are ubiquitous in these sort of settings (spoilers, there are no such creatures). There is absolutely no combat. Nadda. The boomerang bubble bursts pretty early, which is a damn shame because it could have been so much fun.

Your hovercraft comprises three main areas: the control area, the work area, and the living quarters. You’ll learn how to make the hovercraft go vroom-vroom and some arbitrary things that the game makes sound important but really aren’t. For instance, Vanishing Grace makes this whole big deal about you not letting your ship overheat. Yet, I purposely let that thing go all the way over into magma-colored red, and nothing happened. You can, apparently, totally neglect aspects of your ship (along with your wife and unborn child). This is another missed opportunity to make Vanishing Grace more engaging because you’re about to spend ninety percent of your time on this damn hovercraft.

You bounce back and forth between your character Joel’s and Grace’s perspective. You get off of the hovercraft three times during the game. It’s almost a blissful feeling to have some change of scenery. Again, don’t get too excited. Your time off-ship isn’t exactly exciting. You stop, gather some objects, maybe take a photograph with the in-game camera, and that’s about it. The developers missed another golden opportunity to make this game better. Put some stuff in there that we can interact with! Give us some exciting locations to explore and things to find! No, you’ll just find some objects and head back to the hovercraft…

You get more story, solve more brainless puzzles, and wonder why the hell nobody straightens the damn floor rug.

For a story-driven game, the story part isn’t incredibly gratifying. Endless Grace “confession” tapes left me rolling my eyes. Vanishing Grace is full of weird exposition and muddy philosophy, and half-baked ideas that just come off as convoluted nonsense. None of the characters are likable; all of them seem self-serving, vapid, and oblivious. The dialogue is so taxing that I quickly stopped caring where Grace might be or whether she was even alive.

Vanishing Grace also does very little to explain what the actual hell is going on with the world. What happened to turn the Earth into a barren wasteland? What is the Citadel? Are there mutant people and animals out there? Is it actually dangerous to be out and about? Because all you’ll see from your hovercraft is sand and vaguely phallic rocks and trees. If you’re not going to show us, at least tell us. Give us some more back story about this epic friendship that is worth potentially losing your marriage over. For the love of all that is holy, give us something substantive instead of half-baked tangents that have no bearing on anything.

Here’s the thing: I can overlook one lacking element in a game if the rest is good. If the characters and storyline are lackluster, then dazzle me with great puzzles. Sadly, the puzzles in Vanishing Grace run the gamut from fiddly to insultingly simple. More than once, I was stumped because I thought the solution to some puzzle couldn’t be that simple. It was.

The graphics in Vanishing Grace are competent but decidedly bare-boned for much of the game. Details are blurry, especially when you try to read many of the files or notes scattered around the hovercraft or when you try to inspect non-objective related items outside of the craft. But, simplicity can be charming. Some parts of the game were rather nice to look at.

Vanishing Grace isn’t horribly buggy but has some issues. Usable items get stuck in your hand sometimes, things fall through surfaces, objects aren’t always immediately responsive, that sort of stuff. More annoyingly, I could not find a save option, and the auto-saves seem to happen once per in-game ‘day.’ Twice, my headset died mid-chapter, and nothing from that in-game “day” was saved. If you’re going to embark on this adventure, make sure your headset is charged up plenty before you begin. The game’s dialogue isn’t something you want to have to sit through twice.

Vanishing Grace makes me think that somebody took a mediocre short-story and decided to make a mediocre game out of it. Everything about it is middle of the road. This is unfortunate because it could have been an interesting title, but between the dull puzzles and the annoying characters, its batting average is pretty low. The drama isn’t fun or compelling; it’s just tiresome. The story will either make you want to punch whatever is closest to you or put you to sleep. I won’t spoil the ending, but let’s just say it’s…underwhelming.

Oh, and you’ll still hate everyone.

If you want a light puzzler, you’re better off with something like Down The Rabbit Hole or The Curious Case of the Stolen Pets. If you want something more cerebral, you’re better off with The Room VR: A Dark Matter, Red Matter, or Myst. Vanishing Grace is also an incredibly short game, taking less than two hours to complete. The title may be ‘Vanishing Grace,’ but it was my own ability to care that vanished somewhere on that hovercraft.

Vanishing Grace
TLDR : Summary
Vanishing Grace is a perfect example of a title that takes a promising idea and does the bare minimum with it. It undervalues the better elements it offers and instead goes heavy on overly simple puzzles. It relies on a storyline that makes you want to stick your fingers in your ears and scream "lalalalalala" until all the characters stop talking.
Concept
7
Gameplay
5
Graphics
6
Audio
5
Longevity
2
User Rating0 Votes
0
Pros
Easy Movement/Interactions
Decent Stylized Graphics
Straight-Forward Game Play
Cons
Insultingly Simple Puzzles
Convoluted Story
Characters You Want To Punch Right In The Mouth
Short
5
Lost
Get it on the Oculus Store
Vanishing Grace