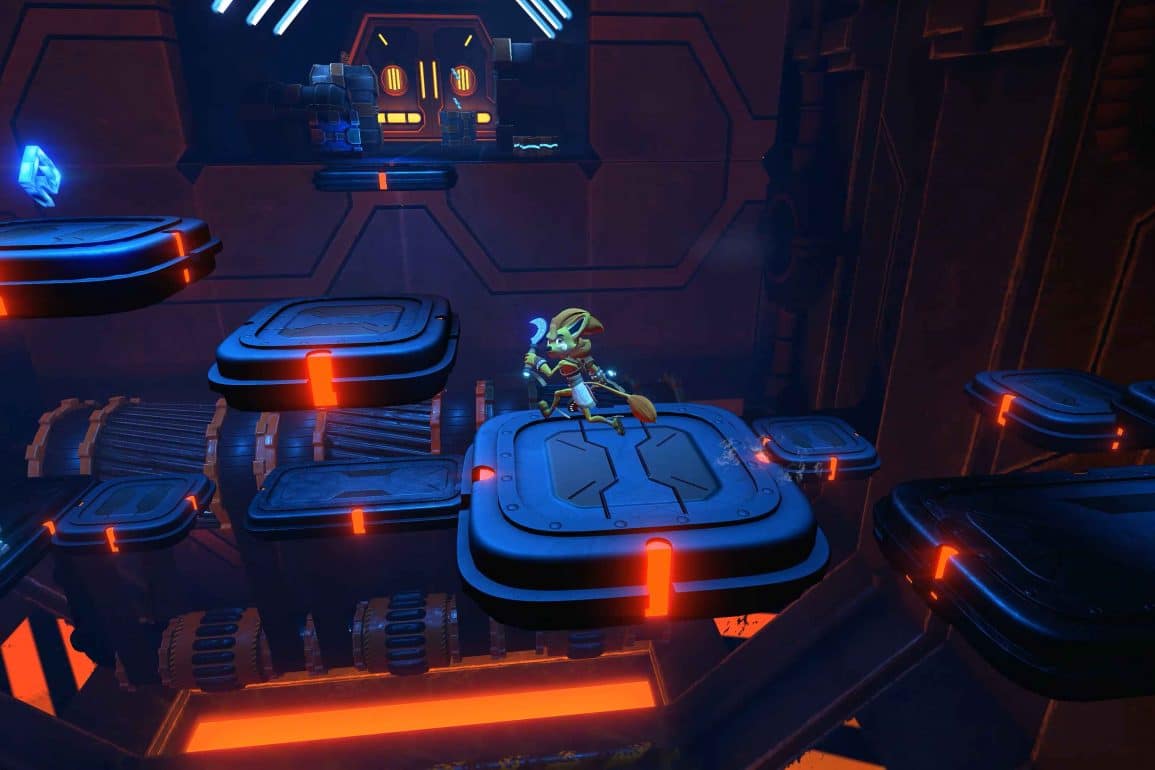 Ven's Very Attractive, But Is That Enough? 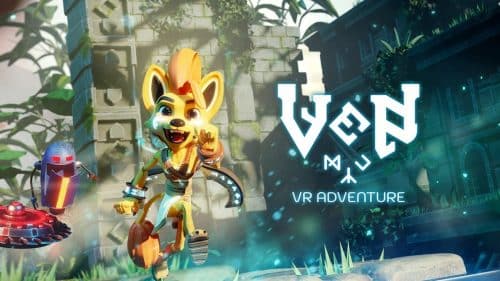 Ven VR Adventure is oddly titled. Rather than call it Ven’s VR Adventure, or Ven: A VR Adventure, it’s just called Ven VR Adventure, making it sound like a working title that somehow ended up as an official title. This slightly awkward naming is somehow perfectly fitting for the game, as you’ll find out during this review. In any case, Ven VR Adventure is a 3D platformer set in Virtual Reality, and as such, will be compared to titles such as Astro Bot Rescue Mission, Lucky’s Tale, or, if you’re only familiar with the Quest as a VR platform, then Moss.

When I first played Ven, I’d only played Astro Bot Rescue Mission and had never played Lucky’s Tale. In fact, I hadn’t even heard about it until I saw many beta-testers compare the two on Ven VR Adventure‘s Discord server. So for this review, I went ahead and tried out Lucky’s Tale, too, so that I wouldn’t only be comparing Ven to something with the monumental production heft of Japan Studio’s Team Asobi.

Ven VR Adventure‘s gameplay offers pretty much what you’d expect. You’re on a mission to save the known universe from a villain whose motivation to conquer and destroy is undoubtedly driven by the fact that his name is Bruce Nelson. Why Bruce Nelson? I don’t know, but that’s his name. You do this by platforming the titular character, Ven, across twelve levels. There’s not much in the gameplay department that veers from the normal expectations of the genre; you can jump, you can double jump, you can smash drop on enemies, you have a basic attack, and there are little Ven-like critters placed in sometimes hard-to-reach places that you’re supposed to collect. Rather than the traditional gold coins employed in Super Mario or Astro Bot or Lucky’s Tale, you collect runes, and for every one hundred runes you collect, the game generously gives you one extra life.

It’s not easy being a 3D platformer in VR. Unlike First Person games like Beat Saber or Pistol Whip or First Person Platformers like STRIDE, there’s nothing about the standard 3D platformers that screams “Put me in VR, Dammit!” I mean, sure, there’s the sheer novelty of having it in VR, but for a third-person platformer to impress in VR, it has to be, well, quite impressive. So let’s talk about what Ven does right, shall we?

Ven VR Adventure has outstanding graphics for a Quest title and unsurprisingly weighs in at almost eight gigabytes. One can only imagine the immense effort involved in putting together these levels, all the more impressive when you realize that Ven’s development team consists of eight people. So here we go; great environmental graphics, good animations, a cute main character, cute collectible characters, and a lot of effort.

If only it all came together the way it could have.

Disappointingly, Ven is let down by several issues that detract from the experience it could have been…

The in-game camera follows Ven at a short distance, but only along the Z-Axis, going into the screen. No matter how far up or down, or how far to the left or right Ven goes, you’re still observing Ven from the center of the playing area. When he’s far, he’s tiny. When he’s high, you might not see him because the camera might be under the platform he’s on. When he’s low, you have to tilt your neck down to see him from an almost bird’s eye view. Worse yet, the camera won’t backtrack until Ven is moved quite a way behind it, meaning that sometimes you can move Ven behind the camera, making him invisible. Ven is supposed to be a game you play seated, but you’ll often find yourself twisting your neck backward to see Ven while you’re playing. The camera in Lucky’s Tale is far better behaved, and I wish the developers had taken their cues from that game or, at least, listened to the beta-testers who suggested more camera options.

Ven VR Adventure‘s audio does not impress. It feels uneven and, at times, almost unfinished. Too many things happen for which there is no accompanying audio effect. When rotating razor blades are flying your way, it’s odd to see them do so in almost complete silence. It’s strange to see large stone traps hammering in silence and then stranger yet to hear one of them make an appropriately loud sound. When Ven hits a lethal object, you see a concentric splash of particles, but that effect makes no sound. None at all. Amid all these graphical flourishes and contraptions, when Ven dies, it’s as though the game were set in space, where, as the line goes, “no one can hear you scream.” This lack of audio f/x was, admittedly, worse in the beta, but that it remains in the final release is inexcusable. Unless its absence is purposeful, some sort of sound should accompany anything that happens in a video game.

Ven, Are You There?

Although the environments in Ven VR Adventure are pretty, they are painfully inert. In Lucky’s Tale, as in Astro Bot Rescue Mission, almost everything in the environment reacts to your character’s actions. In Lucky’s Tale, dandelions seed heads will break apart if you hit them and float all around you. In Astro Bot, plants react to your presence, waves fluttering as you walk past them; everything feels alive. These games also justify their existence as VR titles by making the player interact with the environment to benefit the game’s character. In Lucky’s Tale, you use your head tracking to aim at targets. In Astro Bot, you blow on your controller to activate things and can stretch ropes between the environment and your controller, allowing Astro to trampoline across them. In Moss, also on Quest, the player moves platforms to allow the titular character to jump onto them.

Ven sorely lacks interactivity between the player and the game world. The closest it gets is during a boss battle that has you throwing grenades and through a remarkably ill-conceived segment that very poorly and unnecessarily rips off one of the most popular VR games around. How that segment even made it to the release build is a mystery. It feels like something cobbled together in a drunken stupor one ill-fated night, and that should’ve been met with a sober stare and promptly removed the very next morning as everybody joked about how hammered they must’ve been to think it might have been a good idea. But no, it’s there – It’s in the game. It stayed. Not only is this segment horribly done, but it’s also pretty difficult, and I’m a guy who’s pretty good at the game it rips off. I can easily imagine more casual players getting stuck on that section, doomed to repeatedly play a lousy knock-off of a game they probably already own while hoping to get back to the actual platforming.

Finally, Ven VR Adventure doesn’t feel consistent with its game logic. You could jump onto what appears to be an innocuous-looking pipe, only to find out that touching it kills you. Meanwhile, a huge rocky palm will just push you but not kill you. Why? I don’t know. Maybe rocks are gentle. The point is, the logic isn’t consistent. So rather than learning the basic rules of Ven within the first level or two and then figuring things out based on that logic, you’ll find yourself trial-and-erroring your way throughout the campaign. This randomness makes Ven feel amateurish and sloppy and perhaps explains why at some point in the game, I realized I’d collected around 62 lives. I can only wonder whether lives are so plentiful out of some misplaced balance-breaking generosity or because the developers realized you’d be losing lots of them to camera issues and inconsistent game logic.

Things don’t get any better when you reach the end and realize that the final boss battle has the worst and most random collision detection I’ve encountered in recent history. I kid you not.

Ven VR Adventure reminds me of two really hard-working students I once had in an improvisational acting class I once taught. They lacked a gift for improvisation and performance, but they tried so damn hard that I desperately wanted to see them succeed. Ven gives you all the graphics it can muster. It gives you all the levels it can put together. If it had a kitchen sink, it would have thrown that at you as well. Unfortunately, the issues with the game detract from the overall experience.

There’s still some pleasure to be found in Ven, and if you’re scrounging for a native Quest platformer, it might scratch your itch. You’ll certainly be pleased with the graphics, and the fact that the game provides twelve levels across three regions will probably make you feel that you got your money’s worth. The real problem is that despite initially coming off as a polished title, with a great into featuring polished graphics and impressive spatial audio, the illusion quickly falls apart when you get to the meat of the game.

This Ven is No Diesel

Despite all the work put into it, Ven emerges as a game that works hard rather than smart. It offers a lot but can’t keep from sabotaging itself at almost every step. It might get a lot better if future updates resolve the camera issues, improve the audio experience, and even out some of the gameplay quirks. As it stands, however, Ven VR Adventure is its own worst enemy, turning a potentially great game into a mediocre slog through pretty places.