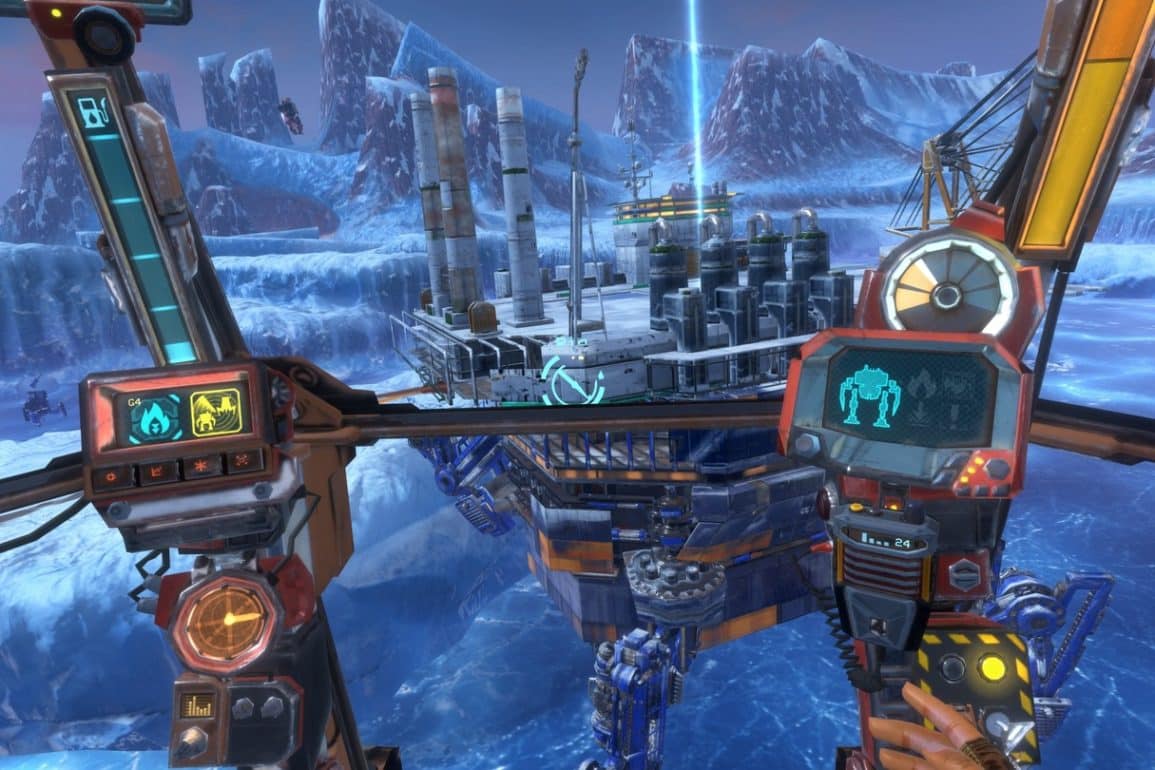 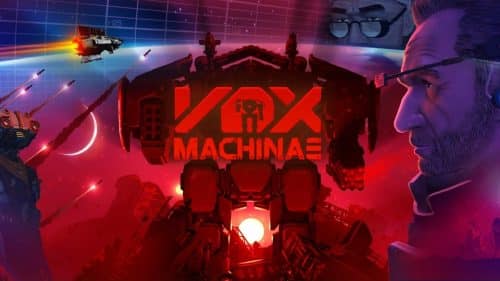 Vox Machinae is a title that I hold in very high regard and a game that I never thought I would see come to life on the Quest. Having said that, I’m sure it comes as no surprise that I have been eagerly looking forward to this release.

The PCVR version of Vox Machinae has existed as a purely multiplayer game since 2018. It has been very successful in this form and is touted by many as the pinnacle of mech-based VR. Refusing to rest on their laurels, developers Space Bullet Corp have updated their giant mechanical space baby with a single-player campaign and a Quest port.

I, for one, am very excited to take both for a test drive.

GET READY TO RUMBLE

Vox Machinae‘s campaign sees the player take on the role of “the Pilot”, an otherwise nameless recruit in the Horizon Security team. Accompanied by an AI companion (that inexplicably does all the talking for you), players embark on a journey that takes them piloting a miner-mech to an elite warrior mech.

The core of this adventure will be played out from within the cockpit of your Grinder, essentially an enormous battle mech. Through a series of missions, the narrative has you learning the full power of your Grinders’ arsenal and abilities as you go into battle to protect your corporate overlords’ interests. In the process, you also uncover the mystery behind a series of unprovoked attacks on remote mining stations.

Between these missions, you spend a fair amount of time on a ship called The Competence, in which you progress through a secondary series of conversational objectives. These serve as expository sections and platforms for NPC character progression. I don’t think it’s unfair to say that these in-between missions are easily the worst part of the new Vox Machinae experience, but we’re getting ahead of ourselves…

In addition to the primary single-player campaign is the original core gameplay of Vox Machinae. By that, I am referring to the incredibly well thought out and delivered multiplayer mode, which is, without a doubt, the real star of the show. Offering 16 player combat missions and featuring a range of gameplay modes and team settings, these are enormously fun. These missions offer various Grinder classes, each with specific strengths and weaknesses and fully customizable load-outs. These multiplayer missions are why Vox Machinae became so successful in the PCVR world. Simply put, it’s great as a standalone multiplayer game.

I HAVE A HUGE COCKPIT

The combat in Vox Machinae is really, really good. Regardless of the criticisms this review will level at Vox, keep that close to mind; the combat is excellent.

The giant metal leviathans lurch ponderously through the alien landscapes with a genuinely credible sense of weight. The control system makes great use of VR, with the cockpit offering a range of well-implemented immersive interactions. Three main joysticks can be virtually manipulated to control movement. Two of these handle the throttle and rotation, while the third controls the thrusters, allowing vertical lift. All this is accomplished in a manner both satisfying and practical. Switching between the three sticks during combat takes some getting used to but quickly becomes second nature.

In addition to the main controls and adding to the mechanical authenticity of it all, there are numerous other switches and levers within the cockpit. Maps and missions are displayed on mounted screens that can be moved closer or retracted to your comfort. An air horn can be sounded by yanking down on a pulley, and the mech itself can even be shut down by turning the ignition key. Everything in the cockpit works together really well to deliver an experience as satisfyingly credible as it is intuitive and fun.

The frenzied combat operates with a tactical cooldown system at its heart, forcing players to constantly balance firepower and movement and keeping them engaged. Firing a consistent stream of carnage from your arsenal will overheat your weapons system. Make a desperate gambit and push your weapons too far, and you will force throw your Grinder into shut down for a few seconds as it cools down. Similarly, your ability to use your mighty jet boosters for vertical lift is limited by a recharging fuel gauge. While this automatically regenerates over time, the recharge is slow enough to make fuel management a vital part of the gameplay. A fuelless overheated mech is a giant sitting target.

A SPECIAL KIND OF HELL

As mentioned earlier, the combat in Vox Machinae is great. The bits in between the action, however, are decidedly not.

The campaign mode is a valiant attempt to take the best elements of the Vox Machinae combat experience and adapt it for players who demand more context for their actions. The story unfolds at a reasonable pace within the combat missions, however, the levels can suffer from pacing issues born of the plodding nature of piloting a giant mech during less action-packed missions.

Where things go horribly, horribly wrong, however, is in between the missions when you get out of your Grinder and head back on board The Competence.

These “missions” focus on listening to endless dialogue that does little to progress the main plot and the performance of various “fetch” tasks that force you to wander the halls of the ship. Over and over, you’re forced to putter around looking for specific items on behalf of inexplicably lethargic crew members. Don’t get me wrong, I’m all for creating a rich world full of character and nuance, but these sections do little more than slow down the action while painfully sapping your will to live.

These sections are so infuriatingly bad that I stopped playing them and instead focused on the multiplayer mode.

DIDN’T I SEE YOU ON GRINDER?

Sadly the downgrade in graphics for the Quest port of Vox Machinae is quite extreme. Don’t get me wrong, everything is functional, and when you’re in the thick of the action, you’ll hardly be stopping to stare out the window. That said, there are enough issues with the graphics that even in the thick of things, you can’t help but notice that Vox Machinae really isn’t a pretty game.

The textures that the large, open expanses deliver are coarse affairs that are reminiscent of PS2 games. The Grinder animations are all perfectly acceptable, and the view outside the cockpit is good enough to keep you engaged, but there is at least one major issue inside the cockpit that is hard to ignore. Vox Machinae provides a solid physics model for the Grinders’ movement and a really pleasing level of interactivity within the cockpit, but the way that the players’ hands just pass effortlessly through everything is hugely immersion-breaking and ultimately robs the world of its sense of physical presence.

Similarly, your crewmates’ character models and animations are equally old school. The animations possess a surprising level of jank for a game that is otherwise generally well delivered. Characters’ limbs clip through their bodies as they gesture and move with incredible stiffness, and posture, physical articulation, and facial expressions are comically bad.

The audio on offer in Vox Machinae is good. The Grinders boom and thud with resonance and a weight that is entirely satisfying and does a great job of grounding the player within the fantasy of being a mech pilot.

The weapons similarly have a meatiness that is entirely fitting with the heft of the subject matter. Overall, the sound effects complement the physics system to deliver a well-conceived sense of weight to the combat.

The voice acting, however, is somewhat more of a mixed bag. The voice work suffers from a few design choices that can make the interactive components seem halting and awkward, but it is good more often than not. The banter and exposition during the combat missions are well delivered and smooth, giving the game some personality. However, the character work falls short of maintaining engagement once back on the ship.

Vox Machinae is an excellent multiplayer game that combines innovative mechanics and intense action to deliver an experience unlike anything else on the Quest library. It is also, at the same time, a fairly lacklustre narrative-driven game that trips over its own attempt to create an interactive, character-based experience.

Vox Machine maintains everything that made the PCVR version a cult classic with an excellent mix of tactical combat and interactive controls. If viewed mainly as a bonus feature, the single-player campaign will supply more of a good thing to those that get thoroughly hooked. For everyone else, the real single-player mode will be 8 v 8 bot battles that will have you coming back for more.

Vox Machinae | Review
TLDR : Summary
Vox Machinae is an excellent multiplayer game that combines innovative mechanics and intense action to deliver an experience unlike anything else on the Quest library. It also has a single-player campaign, but treat that as an added bonus.
Concept
7.5
Gameplay
8
Graphics
5.5
Audio
7.5
Longevity
8
Pros
Great Mech Controls
Fun Multiplayer Combat
Cons
Tedious On-Ship Gameplay
PS2 Quality Graphics
7.5
Hefty
Get it on the Oculus Store
Vox Machinae