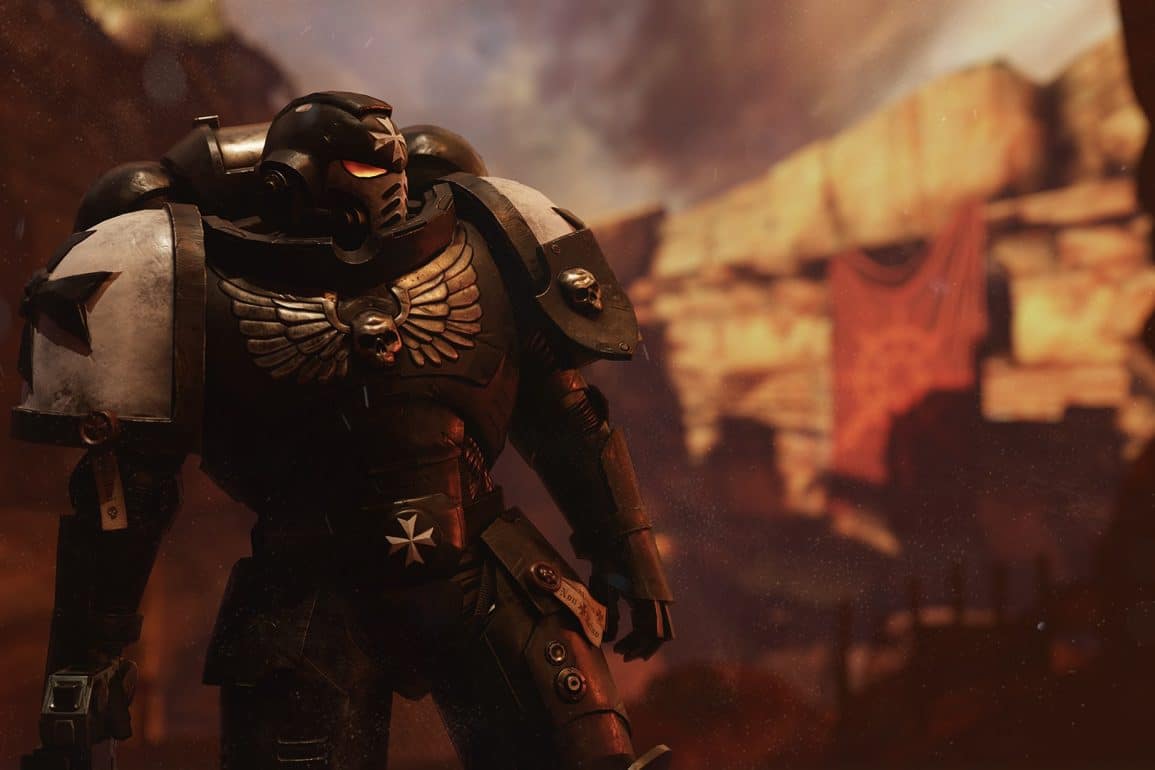 The Warhammer Universe Comes Blasting On To Quest 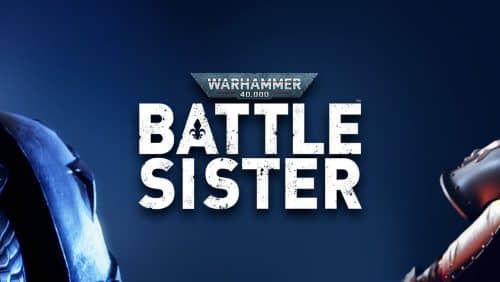 ‘Tis the season to be gaming, and Warhammer 40,000: Battle Sister is at the vanguard of Oculus’ promising lineup of holiday releases. Anyone would think that they had just released some new, game-changing hardware and were eager to boost their sales with some big-name IP’s just before Christmas. Well, the time has come to see if developers Pixel Toys have birthed our space saviour, or offered Battle Sister as a sacrifice upon the altar of mediocrity? Let us bow our heads and pray…

I identify as a geek. From Star Wars to Lord of the Rings, from trading cards to tabletop gaming, when it comes to the “nerdier” past times, I’ve just about covered them all. That is, however, with the notable exception of Warhammer. While I circled around it for many years and knew a LOT of people who loved it, I just never latched on.

So, when the chance to review the new Warhammer 40,000: Battle Sister came along, I wasn’t laden with preconceptions and a need for accuracy to the canon. Instead, I was free to enjoy the game on its merits as a stand-alone entry into the VR world. For what its worth, I think that’s a blessing. Without having to suspend my disbelief that a Battle Sister was taking down Space Marines (research and screaming internet voices inform me that this is preposterous), I could revel in the fact that I was a Battle Sister. Hell yeah, I can take down Space Marines!

Thankfully, Battle Sister doesn’t require a PHD in Warhammerology, and can introduce you into the 40K universe with a mercifully succinct introduction. Essentially, humanity is waging an intergalactic war on all fronts led by the Mighty Space Pope (aka The Emperor). He seems to believe that everyone with a differing viewpoint to his own is a heretic and must be cleansed. Thankfully, he has an army of militantly-radicalised space nuns at his disposal. All of whom are ready to leap into the fray and die in glorious battle for his approval. With that kind of fervour (not to mention firepower) suppressing the heretics can be done with almost colonial ease.

When it comes to the actual game mechanics, Warhammer 40,000: Battle Sister is hardly revolutionary, but it is undoubtedly well produced. It has all the key elements that you would want from a major IP release. So much so that there were many points that I found myself comparing it to the recent Star Wars: Tales from the Galaxy’s Edge. The mechanics are similar; both are linear cover-based shooters that encourage you to move forward and clear the enemies before progressing to the next section. The two games also share similarities in story pacing, mission structure, and even graphical fidelity. At times, Battle Sister plays a bit like Galaxy Edge’s grungy little sister.

Another comparison can be found in the overall level design. Warhammer 40,000: Battle Sister and Galaxy’s Edge both see the player set off on a series of missions that seem to be a low effort (aka accessible) standard for the modern FPS shooter. You know the kind: “What’s that over there? Hmmm, not sure, better go shoot those guys!” or “Dammit, we need the thing from behind the other thing! I know! Lets split up and go shoot those guys!” Now I’m not saying that the story is bad, in fact, far from it. I quite enjoyed my first foray into the 40K universe. Still, I will say that its relationship to the gameplay is fairly superficial. But I guess that doesn’t matter too much, as long as the game is fun, right?

Warhammer 40,000: Battle Sister sees the player take on the role of Sister Ophelia, a battle-scarred veteran of the order. When her friend and mentor is cut down in battle, Sister Ophelia returns to the floating space convent for some much-needed soul searching. Needless to say, things do not go smoothly. In an attempt to stay as spoiler-free as possible I won’t go into any more plot details but will say that from that point onwards, you continue to do your holy duty towards the Emperor’s war almost without question.

As you continue this Holy War through space, you will have little interaction with the world around you, save for the items that you are supposed to use. This is limited to weapons, and one type of mechanism that you fix or break depending on the requirements of each level. Enemy weapons disappear along with their corpses, except for one level where you are inexplicably allowed to use the baddies’ cool axe things.

Warhammer 40,000: Battle Sister offers a tour de force of The Usual Suspects of VR interfaces. This makes it both familiar to more experienced players and intuitive for those newer to the medium. Guns can be holstered at the hips, melee weapons and larger guns can be holstered over the shoulders and grenades attached to the belt. There’s no inventory system other than a pouch that stores the readily available ammunition. No health packs are needed as your health recharges over time.

Combat in Battle Sister is good fun. It’s simple but effective. You have a range of weapons, from pistols to flamethrowers, with which you take down the various demons and lunatics that you encounter. They’re all interesting, but in reality, the starting Bolter is all you need. Gunfights can be hectic until you learn to use the cover around you, picking off ranged opponents while axe-wielding heretics charge headlong into your steady stream of gunfire.

In addition to the more conventional weapons, your militant space nun can also perform gesture-based “Acts of Faith”. These powers are unlocked as you progress through the story and will in many cases become the difference between death and….um, not death. Once used, your ‘Faith’ metre, displayed on the rosary beads located on your wrist, will recharge, and will do so even quicker the more you kill. It seems that the Warhammer God is indeed a bloodthirsty, vengeful god.

Although convenient, the rechargeable health mechanism does make the game relatively easy. If you find yourself in trouble, all you need to do is hide behind something for a while, and you’re ready to enter the fray again. In my playthrough, there were only one or two places where I died repeatedly and needed to take a breather and think strategically. Other than that, it was pretty easy to progress as everything that you need is abundantly available. There was only one time when I found myself out of ammo, couldn’t immediately replenish it, and had to rely on my melee weapon.

Speaking of melee weapons, one of the things that I was most looking forward to in Warhammer 40,000: Battle Sister was testing out the melee combat. Despite a few noteworthy attempts, there really isn’t anything on the Quest that scratches the itch for solid melee combat mixed with good quality gunplay. The brilliant Sairento VR comes close, but the swords lack any real physical presence, a fact which robs it of some immersion. The Walking Dead: Saints and Sinners offers the best melee combat on the platform, but the stamina system in that game doesn’t match so well with a fast-paced, nonstop action-adventure. So, when I saw the trailer for Battle Sister, I thought this could be the one. Sadly, it really isn’t.

The game provides you with a range of melee weapons, all of which can hack and dismember the screaming heretics that relentlessly come charging at you. You can block incoming swings from the axe-wielding maniacs. So if you really try, you can almost fool yourself into thinking that you’re participating in some actual swordplay. In reality, though, there is no real physics behind it, and if you want, you can just wiggle your sword around in front of you and watch as pieces of the enemy fly. It’s regrettable because the gunplay is the kind of accessible, arcade-style affair that I quite enjoy. If there had been just a bit more depth put into the melee system, then Warhammer 40,000: Battle Sister would have stood head and shoulders above the pack.

Warfare in the Space Renaissance

Graphically, Warhammer 40,000: Battle Sister really shows the difference between the limitations of smaller indie productions and games that have a bit more money behind them. Battle Sister sets a high bar for the visual world that you occupy, with a diverse range of scenery and settings. The game takes players through the labyrinthine corridors of a space nunnery, to the surface of a desolate planet, and deep inside the interiors of a hulking warship. Overall, everything here looks pretty good, although some environments do look better than others.

It is, however, not perfect and there are a few notable exceptions that stop Battle Sister from being uniformly lovely. Interspersed within the game are some textures so flat that they look out of place, almost like placeholders that someone forgot to come back and finish. Bullet hole textures hover inches away from surfaces, looking quite odd as you walk past them. They look like detached, disembodied textures just floating there with no connection to the world.

Fog and darkness are generally used to good effect, hiding the more distant textures and allowing for some large internal spaces. Still, there are times when it can feel a bit overused and lazy. Often, I would explore the darker corners only be disappointed with how little effort had been put into these sections. There are also several glitches present where areas of the level will load in without their textures. Still, as with other newly released games, I’m optimistic that these issues will be patched out in short order.

The Voice of God

The soundscape that Battle Sister provides is more than adequate, fitting the thematical elements of the game well. The music intensifies in battle and drops away in between action sequences, which is fitting but can seem jarring when you encounter small groups of enemies. No sooner does the tense action music begin before “bam, bam” and you’re abruptly back to the walking soundtrack again. The spatial audio cues are decent, giving an adequate warning when an enemy is nearby or approaching from behind.

The voice acting is excellent, with the character portrayals believable and engaging. The main characters carry the story well, bringing an authenticity that surprised me amongst the heavy-handed pseudo-Catholic rhetoric. When I entered one of my first combat encounters, I found the cries of the heretic horde genuinely alarming. The crazed cockney sounding madmen put me in mind of a terrifying post-apocalyptic walk down Ridley Road market (please forgive the East London reference). Even though the few lines they have do grow stale quickly, they are, at least initially, impactful.

I must admit, however, that by the end of the story, I grew tired of the constant ideological references. It would seem that I have only slightly more patience for zealots of video game religions than I do for those of real ones.

Warhammer 40,000: Battle Sister has positioned itself as an accessible entry-level shooter, with a bit more grit than others in the genre. While it doesn’t bring anything revolutionary to the table, it does deliver a solid experience that is genuinely fun to play.

At about four hours it’s hardly an opus, but the story, voice acting, mechanics and gameplay are all good enough to make the game a valid purchase for fans of the genre or franchise. Once the promised multiplayer horde mode is introduced this should become an even more well-rounded package, and one with greater longevity.