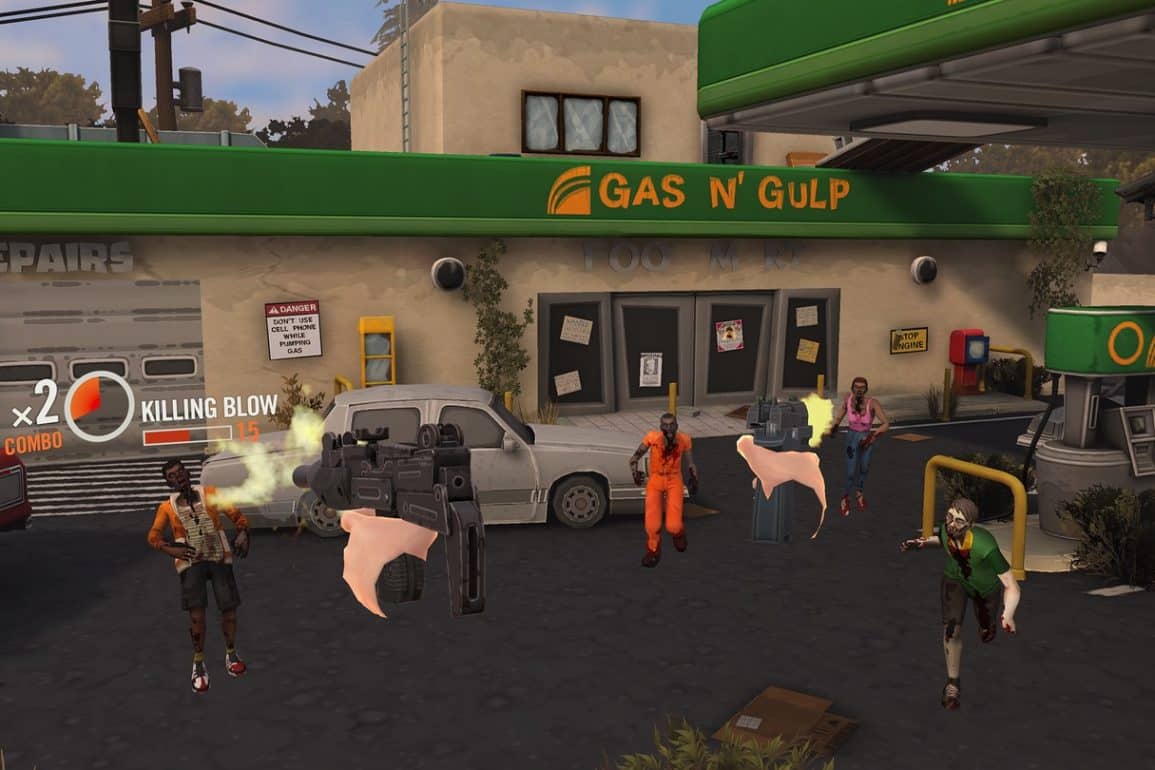 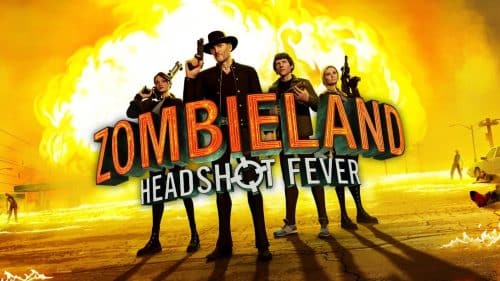 Like the movie it’s named after, Zombieland: Headshot Fever aims to reinvigorate the VR zombie-horror genre with high-intensity humor and personality. Can it reanimate the undead shooter genre and bring a bit of life back into those stinky, shambling corpses?

You play as a new, nameless character among the original pack of survivors from the Zombieland films: Tallahassee, Columbus, Wichita, and Little Rock. Looking slightly stilted and voiced mainly by soundalikes, these wisecracking companions give a decent approximation of hanging out with Woody Harrelson or Emma Stone. Woody Harrelson’s brother Brett performs Tallahassee’s voice, and Abigail Breslin reprises her role as Little Rock.

In the films, these characters thrive during the zombie apocalypse with scathing wit and gallows humor, not to mention superb zombie-shooting skills. In Headshot Fever, they don’t fight by your side, but they will provide you with an assortment of firearms and perks, comment on your overall speed, and express disappointment when you break a hot headshot streak.

The crew is holed up in a deluxe mansion as they prepare for the “Zombieland International” competition, also known as the “Nut Up Cup.” Before you can sign up for the Cup, you’ll have to visit locations around town to sharpen your zombie-hunting skills.

Each mission is blazingly fast, with a one-minute goal for killing all the undead in an area and reaching the exit along a predetermined path. The gameplay is reminiscent of light-gun classics like House of the Dead, but with a greater degree of depth once you start chaining combos.

True to Columbus’s famous “double-tap” rule, by landing two headshots in a row, you can activate a combo meter and slow down time. Each new combo rings with a satisfying electric guitar power chord. As you play, you’ll discover other clever ways to keep your combo alive, like shooting thrown objects (such as ashtrays, cups, and severed limbs) out of the air.

Although there are only eight main missions before the big finale, they can be replayed multiple times with different goals. You might have to shoot a hidden item in the background, use only a particular weapon, or beat the level with perfect aim. These mission goals will reward you with new guns, perks, and the in-game currency that reigns supreme in the post-apocalypse: rolls of toilet paper.

While the missions are rapid, they do contain additional replay value. You’ll want to revisit each scene more than once as you gain more abilities, just to check off another goal or collect more toilet paper. The developers have also indicated that virtual zombie-slaying runs could become a recurring e-sport event.

The developers have hidden a few cheeky jokes into these scenes and keeping with the Zombieland movies’ dark and sometimes juvenile sense of humor. For example, a visit to eliminate your character’s undead parents reveals a kinky camera set-up pointed at their bed and a voyeur zombie lurking in the closet. Later, you’ll crash a zombie bachelorette party, complete with a gigantic fireman-stripper zombie.

This attention to detail also extends to your zombie targets. Many of the zombies in this game actually look different from each other, with a variety of clothing and faces. In many games, you’ll see the same few minions and boss zombies recycled, but Headshot Fever is more imaginative in its approach.

Zombie Kill of the Weak

Cheerful graphics, fast-paced gunplay, and generous doses of humor and personality provide a lot of excitement throughout the brief missions.

The online leaderboards are a welcome feature. The final fight offers branching paths and a much greater degree of challenge. Still, there’s not much of an opportunity to explore this world at a slower pace or recreate any of the classic “Zombie Kills of the Week” using environmental objects or traps (besides the occasional “exploding barrels”).

While most of the point-and-shoot pistol controls work well, reloading your alternate weapons can feel imprecise. It’s not fun having a horde of zombies tear you apart because positioning your shotgun into the nebulous, chest-high reload zone didn’t register in time.

For a VR introduction to the crazed world of Zombieland: Headshot Fever delivers a fair amount of the films’ attitude and thrills. It never takes itself too seriously, and it often makes you feel like a stylish, zombie-slaying badass, cool enough to hang out with the heroes of the movies. If you like your zombie games on the lighter side, it’s easy to recommend this bloody, energetic blast of a game.

Zombieland: Headshot Fever
TLDR : Summary
TLDR: Zombieland: Headshot Fever never takes itself too seriously and often makes you feel like a stylish, zombie-slaying badass who is cool enough to hang out with the heroes of Zombieland.
Concept
8
Gameplay
8
Graphics
7.5
Audio
8.5
Longevity
7.5
User Rating0 Votes
0
Pros
Enjoyable collection of rapid-pace zombie-shooting missions
High level of challenge
Contains some of the flashy personality of the films
Cons
Not a large number of missions
Combat is limited to straightforward gunplay
Some fumbling with the reload mechanic
8
Entertaining
Get it on the Oculus Store
Zombieland: Headshot Fever