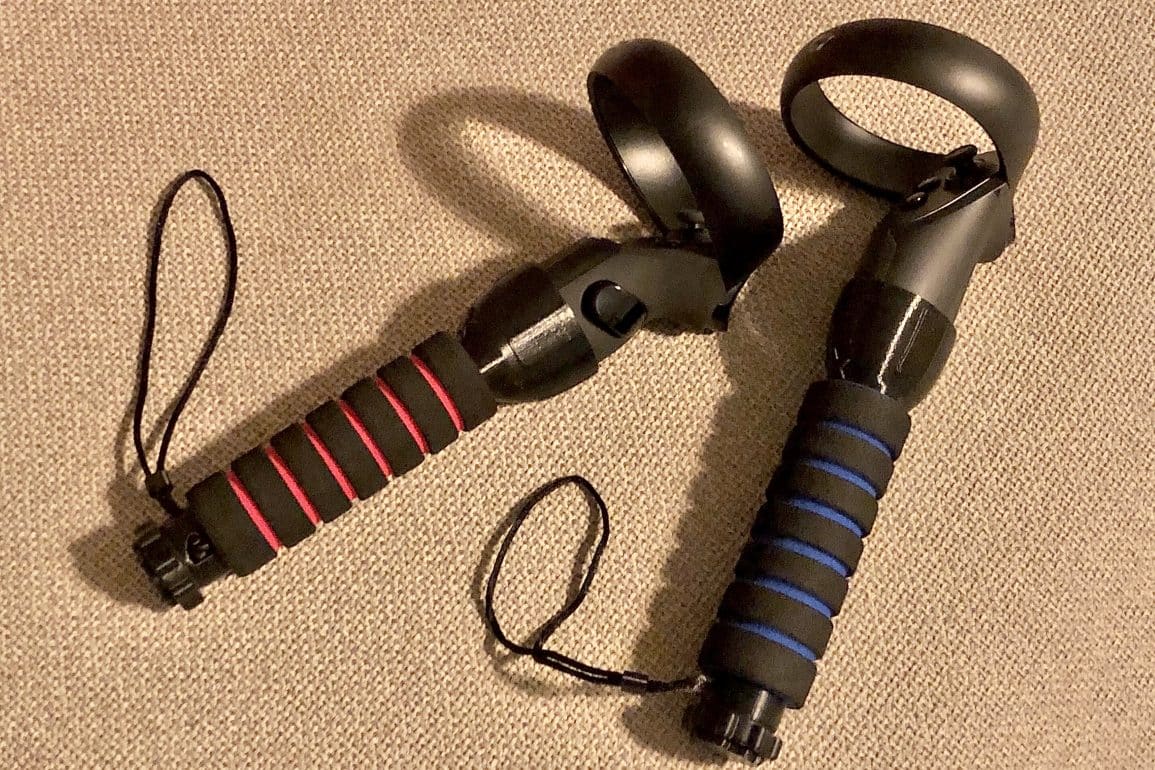 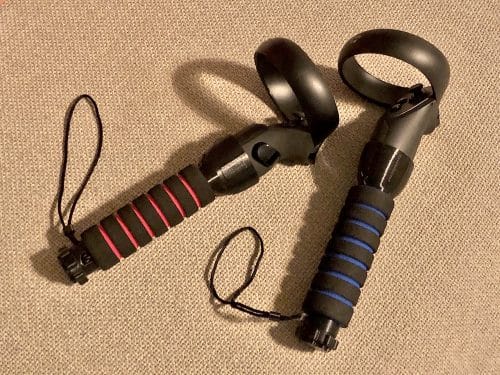 What are the AMVR Beat Saber handles? Are they really going to make your life better!

Give me a minute…

I was eyeing the Quest when it was first released, mostly on account of Beat Saber. I loved the game on PSVR but hated the fact that I couldn’t add custom levels to it as PC gamers had been able to. Then, along came the news that the Quest version would support custom levels. Bam. Sold.

Now, other than a smaller selection of tracks, the PSVR has other problems, inherent not to Beat Saber, but to the platform; poorer tracking, the lack of custom levels, and the wire that often got in my way. Having said all that, it has an advantage that I only noticed when I started playing the game on the Quest; the PS Move Controllers made for awesome lightsaber hilts.

The beams came out of them at just the right angle, and the grip was fantastic.

What’s Wrong With the Quest Controllers?

On the Quest, almost from the start, I could tell I would have issues with the Touch Controllers. They’re great for regular games, where you don’t have to swing your arms around at speeds that make hardware developers go back to their code. With Beat Saber, especially if, like me, you have relatively big hands, the Touch controllers are less than perfect. They’re too small and they’re slippery. The light beams also come out at a slightly odd angle, but that’s okay, you get used to that. It’s true small, slippery grips that could put you off their game.

Can You Light My Saber?

The AMVR Dual Handles (otherwise known to the community as ‘the AMVR Beat Saber handles’ promise to solve that problem. They look the part too, looking for all intents and purposes like you welded a pair of PS Move controllers to your Oculus Touch Controllers.

I hated them when I first got them.

Putting them on was a tedious process that could have been explained better. You have to take off your battery cover, remove the native Touch controller straps, unscrew the AMVR controller until you find their replacement straps (there are two, one at the bottom for your wrist, replacing the regular strap, and another at the top to secure the AMVR handle to the Touch Controller), attack the top AMVR strap where the native strap was attached, firmly secure the grip around the Touch Controller, and then screw it from the bottom until it’s held tight. I hope these instructions help you out because honestly, it took me longer than it should (and a couple of YouTube videos), to figure this out.

Okay, so once they’re on, how are they?

They’re great for Beat Saber, even if they feel a little funny at first. The hilts are a little farther from your grip than they normally would be, but that’s okay. You get used to the extra length. The grip is also very good. It feels robust, it’s totally non-slip, and the light beam comes out perfectly.

So why did I hate them?

As mentioned, putting them on was a tedious, clunky process. Screwing the handles on tight cannot be done very quickly. The worse problem is that although they work wonderfully for Beat Saber, they are absolutely, ridiculously awkward to use for anything else. Maybe they’d also be good for a sword fighting game where you didn’t need to reach the thumbsticks, the trigger buttons, or anything else. Maybe. To my knowledge, only Beat Saber, of all the games I’ve got, forgoes the use of almost all controls, requiring buttons only to pause, quite, or start a level. This is not the norm, and because of this, the AMVR handles are terrible for ‘normal’ not-Beat Saber usage.

Wax On, Wax Off

What this means is that you’ll have to constantly put them on and take them off. The very notion of doing this every single time I wanted to play Beat Saber put me off. So, without further consideration, I put them back in the box and forgot about them for a month. To my knowledge, only Beat Saber, of all the games I’ve got, forgoes the use of almost all controls, requiring buttons only to pause, quite, or start a level.

Most games do make use of some of the controls, and because of this, the AMVR Beat Saber handles are terrible for ‘normal’ (read – anything other than Beat Saber) usage. What this means is that you’ll have to constantly put them on and take them off. The very notion of doing this every single time I wanted to play Beat Saber put me off. So, without further consideration, I put them back in the box and forgot about them for a month.

Two days ago, the Quest ScoreSaber beta was released for Beat Saber. In case you don’t know, ScoreSaber allows you to access global and country leaderboards for custom levels. So whereas before you could play ‘Moves Like Jagger’ for fun, now you could actually see how you measure up against tens of thousands of other players online.

I’m a guy who once spent a full day making it to the global top fifty on one of the original Beat Saber tracks, ‘Commercial Pumping’. I am at my best when I’m trying to beat the rest of the world. I’m not crazy, I won’t go nuts over not being in the top ten, but if I like the tracks, I want to at least squeeze into the top fifty. Fine, let’s say the top one hundred, at least. I may be getting old, but I’m not dead. Not yet.

Until You Fall | Review

By Andrew Podolsky
In Reviews

So I figured I’d have a long Beat Saber sessions, rather than bounce around between games as I usually would. Given that, that I was willing to spend most of the day playing nothing but Beat Saber, I pulled the AMVR handles out of their box, put them on, and went for it.

Admittedly, they were easier to put on this time, practice, as they say, makes monkeys out of all of us. It helped that I knew what I needed to do this time.

The grips do help a lot with Beat Saber, and I found myself blissfully unconcerned with losing my grip, and quite happy with how they felt. The extra reach that you have with the handles could arguably be considered unfair since you can reach cubes that would otherwise be just a little bit out of reach. Is it unfair enough that it’s cheating? Not really, but if you’re playing for fractions of a percent, hoping you inch your way up the leaderboards, then it could well give you a slight advantage.

All in all, I have mixed opinions on these things. If you think you’re going to keep them on all the time, then forget it. If you’re buying them knowing full well that you’ll have to put them on every time you want to use them for Beat Saber and then take them off every time you want to do anything, absolutely anything, else, then fair enough. They’re only $25.90.

I’m going to be using them occasionally, and only when I’ve decided beforehand that I’m going to spend the day (or at least a full morning or evening) playing nothing but Beat Saber. I can also see them being useful if I have people over and we’re all just interested in competing at Beat Saber. Most of the time, however, I’ll probably leave them off, or maybe use the Mamut Touch Grips instead if I just want a little more grip without the full PS Move experience that the AMVR handles provide.

I’m rating these for casual users who would consider them an extra peripheral. If you’re a dedicated Beat Saber player who swears by them, don’t get angry – just add one or two points to the overall score! You’re getting them anyway, aren’t you?