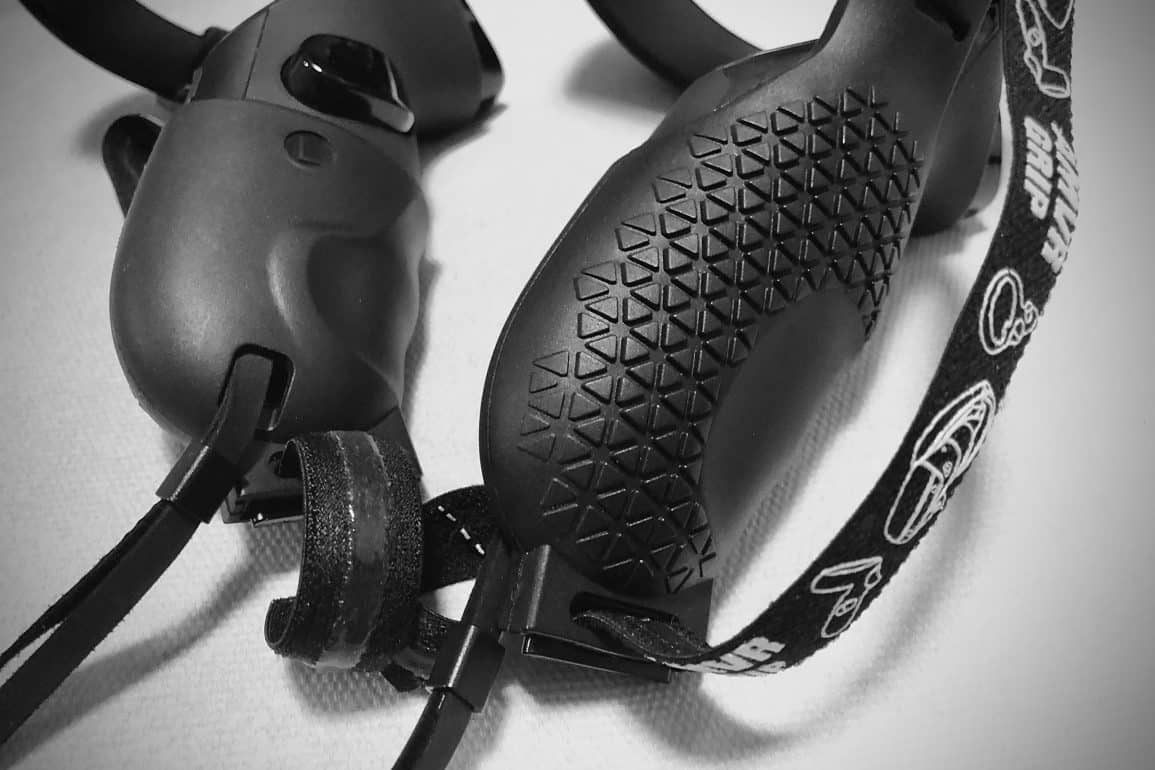 It’s a recurring problem that’s happened with every new Quest owner. We love how well the Oculus Touch Controllers track, but, for many of us, they’re just a little bit too small. They’re also a little bit too slippery, and many of us have had the battery covers slip off while we’re swinging them around. I found this happening to me regularly, especially when intensely swinging the controllers downwards. With their Touch Grips, the folks at AMVR think they have a solution.

Third-party grips exist for three reasons; you want to have a better grip, you want it to keep the battery cover in place, and you want to feel just a little bit bigger. Another advantage to such grips is that you can play with open hands since they have bands that keep the controllers bound to your hands. I find this particularly useful for something like Guided Tai Chi, which I refused to play before because I found it incredibly unnatural to do any Tai Chi with my hands held tight. Most Tai Chi is practiced with relaxed, open palms, and gripping controllers stuck me as anathema to the relaxation I would usually enjoy when practicing Tai Chi.

Anatomy of a Grip

What About the Mamut, Dammit?

I’ve tried the Mamut Touch Grips that Tim Wilson reviewed here on 6DOF Reviews a while back, and although they worked well for him, I had a less than stellar experience. My main problem with the Mamut grips was that I couldn’t comfortably reach the trigger button with my index fingers when I had them on. Perhaps the angle on the upper lip was too close to the front and constrained my finger, or maybe they were simply made for smaller hands. All I know is that I stopped using them because, to reach the trigger button, I had to have the hand band wrapped around my fingers rather than around the back of my hand. I found this less than ideal and gave up on them.

I recently had the opportunity to try out the AMVR Touch Grips, and, even though both grips look more or less the same when you see photos of them, there are some differences. To me, those differences were critical, and the end result is that I now only take them off when I have to replace my controller batteries.

It’s tough to explain in writing what the main differences are when the experience is so tactile, but here it goes:

The AMVR Touch Grips have three different slots that the accompanying bands can be attached to rather than the Mamut’s single twin slot. This allows you to move the bands to accommodate the size of your hands. Given my experience with the Mamut Grips, I didn’t even bother with the two lower slots, and immediately attached the bands to the highest slot, as hoped, this meant that my index finger had no trouble reaching the trigger button on the Touch controllers. The higher placement of the band slots also means that the bands rest comfortably on the back of my hands, and not against the backs of my fingers.

Whereas the Mamut grips used laces to attach to your hand, the AMVR touch grips use bands. The laces weren’t solid enough to be irritating, but having flat bands rather than soft cylindrical laces against my hand just feels better to me. The bands also have silicone attached to their insides, so they adhere to the back of your hands when you’re using the grips. How long will the silicone last? I’m not sure, but I’ve noticed no deterioration and I’ve been using them for several weeks.

Unlike the Mamuts, which use the same laced to attach the lip to the ring and then loops it through itself to go to the grip’s locking mechanism at the bottom, the AMVR touch grips use a short velcro loop to attach the lip to the ring, and this goes through a smaller slot that’s above the three hand-size slots. I’m not sure which is a more secure solution, but to me, the AMVR method seemed to ensure a neater fit around the ring and felt less clunky.

The texture of the protective shells on both grips feel very similar, and I can’t say there’s much of a difference there. They both felt solid, and both provided good friction. The AMVR’s surface is made up of small triangles, and the Mamut’s is made up of small diamonds.

Throwing in the Kitchen Sink

I’ve never used a VR lens cover because I just don’t put my Quest somewhere where I’d need to worry about the lenses getting scratched. I also know that at least one user who had scuffed lenses thought that it might’ve been caused by his lens covers. So the utility of the lens cover is something that you have to decide for yourselves.

The Anti-Light-Leakage nose pad was confusing for me. I wasn’t quite sure how to attach it, and, to my understanding, Doc Neale had the same problem. I finally asked the folks at AMVR how to attach it, attached it, found it did nothing for me, and promptly took it off, never to see it again. Now maybe my nose isn’t the right shape, and perhaps I just didn’t spend the time adjusting it because, honestly, I’ve never let a little light leakage take me out of a game, but again – as with the lens covers, your mileage may vary.

The inclusion of four bands is, admittedly, a cool move. They all have AMVR branding on them, but two of them are just black and white, and the other two are colored Red and Blue! Clearly, these were made with Beat Saber players in mind, not surprising considering AMVR is also the company that gave us the Beat Saber Handles. I’d have appreciated a plain black band option, without any branding whatsoever, but I’m also a brand-averse person who won’t wear any clothing that prominently displays any logo.

You Know Where I’m Going With This, Don’t You?

Whereas I had some issues with their Beat Saber Handles, the AMVR Touch Grips impressed me a great deal. They’re well thought out, nicely designed, and feel robust. I had an easier time putting the AMVRs on than the Mamut grips (especially when it came to getting the native straps out of the bottom) and loved the fact that I could finally, comfortably use my index finger for the trigger button. They’ve been attached to my Touch controllers since I received them, and I only wish that somehow AMVR had managed to work out a way for us to replace batteries without having to loosen the velcro strip and pull the grips halfway off.

At $24.99, and until I run into an even better solution, I can’t recommend these enough. If you’ve had any of the controller issues that I mentioned earlier in this review, or just want a more comfortable grip on your controllers, go ahead and buy these.