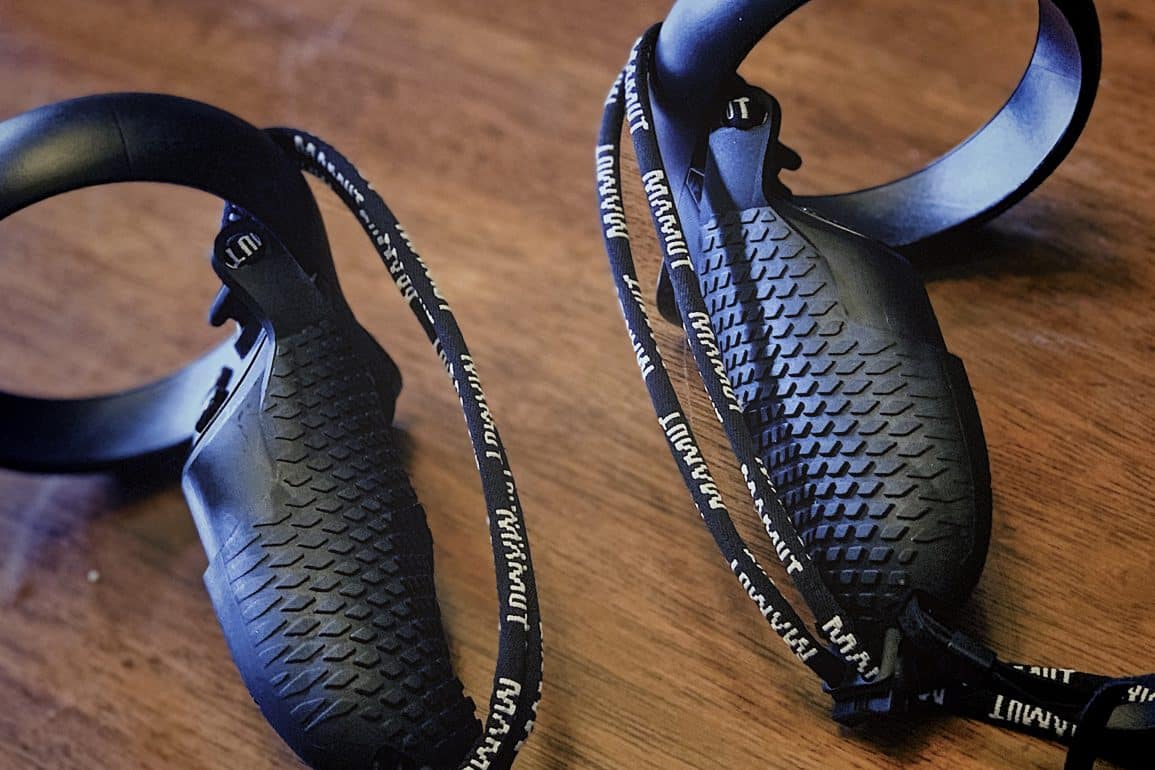 The Mamut Touch Grips may appear expensive for what they do, but their comfort and ease overshadow their reasonably minimal cost. When there is a demand for a new product that provides a simple solution to a common problem, this typically leads to a successful fundraising campaign. The Mamut Touch grips grew out of such a successfully funded campaign, initially for the Oculus Rift Touch controllers.

What was the problem? Well, for some people, the Oculus Touch controllers either had the tendency to slip out of people’s hands when grip was lost or due to the loss of grip buttons and triggers would get accidentally pressed. That is where Mamut comes in. The rubberized grips not only help you feel, but the included straps can be used as knuckle straps and increase your confidence in the grip.

The Mamut Grips require minimal setup out of the box. You simply slip them over your Oculus Quest controllers, tighten up the straps. There’s not much more to say. This is a testament to the user-friendly design that Mamut has created.

I used to get frustrated at certain games as some of the tactile actions were not very intuitive. Interestingly, I’ve found that when I use these grips with the knuckle straps, many games feel more natural. Now I feel more confident in my grip. One such game is Beat Saber. As silly as it sounds, when my knuckles are tightly strapped to the grips, I feel so much more confident in my ability to swing wildly without the worry of the grips slipping from my hands. This is true for other games as well, especially shooters. Crisis VRigade is one of my favorite shooters, and with these grips, I find myself much more confident. Also, my movements feel more natural. With the ability to completely let go of the grips (thanks to the knuckle straps), these grab and drop movements feel much more intuitive, almost natural.

I have to say that these may not be for everyone. Everyone has different palm sizes, finger sizes, grip styles, etc. Mamut did a great job designing these to be ergonomic and functional, but that doesn’t mean that it is the perfect option for everyone. I have a couple of friends who have tried them and think they are uncomfortable. What I’ve found is they fit best for people with larger hands. You’ll need to decide for yourself if they are right for you.

When I ordered these, I assumed they would be a cool add-on that I would use from time to time and might work better for certain games and not so well for others. I was so wrong. Now that I have these, I could not imagine taking them off! I mean that. They make my experience many times more enjoyable in almost every game. What I didn’t expect is that I find myself playing for longer. After many games and many hours spent with these grips, I can say that the quality is wonderful. I don’t see them getting worn out for a VERY long time.

Although perfection is not possible because no two hands are alike, I find that these are a fantastic, functional product that everyone should try if their budget allows.

Mamut Touch Grips
TLDR : Summary
Although perfection is not possible because no two hands are alike, I find that these are a fantastic, functional product that everyone should try if their budget allows.
Ease of Use
9
Setup
8
Longevity
10
Usability
7
User Rating6 Votes
7
Pros
Comfortable
Well made
Cons
Depends on your hand size
8.5
Great!