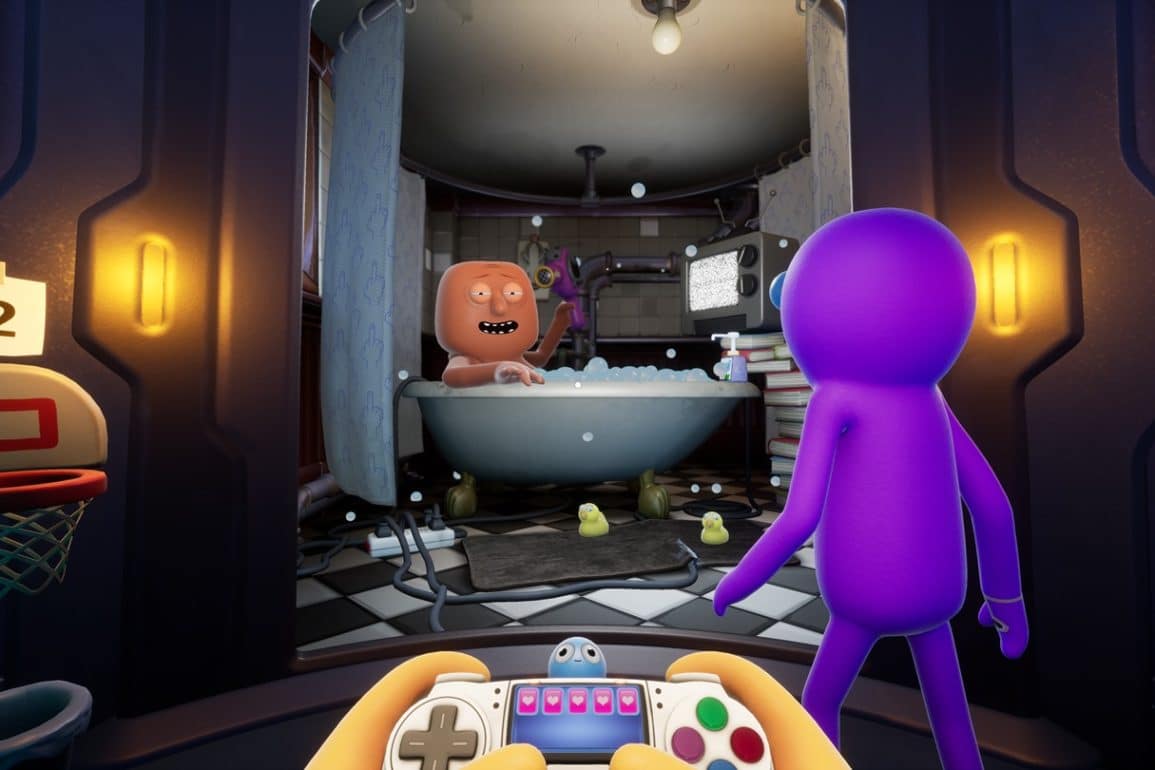 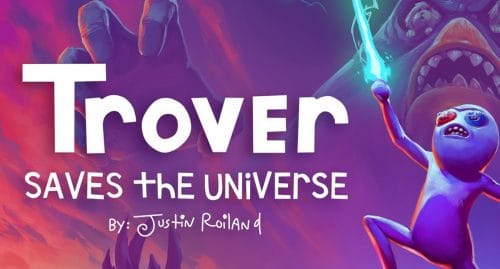 It’s not apparent at first, but the loud, cartoonish purple eye-hole monster in Trover Saves the Universe occasionally has something profound to say. Mostly, what he says is twisted and hallucinatory. He’s also constantly screaming obscenities and dripping with bodily fluids, so maybe take that into account.

Be prepared — Trover Saves the Universe is an adult humor game from Rick and Morty co-creator Justin Roiland. It’s full of cartoonish gore, potty talk, and a handful of deliberately whacked-out mind-f@#!s. If you’re used to this particular kind of hard, R-rated humor, you’ll be shocked and delighted in equal measure.

Showcasing a knowledge of gaming styles and conventions, Trover Saves the Universe starts with its own stupid-clever MacGuffin. You play as the Chairorpian, a creature who stays seated, mutely watching as the game’s strange events unfold. One day, a giant space creature called Glorkon abducts the Chairorpian’s adorable dogs and sticks them in his eye sockets. This gives Glorkon the power to combine worlds, threatening the cosmos.

Then the Chairorpian meets Trover: A purple, Meseeks-like creature armed with a lightsaber. Trover shoves special “power babies” into his eye-holes, so now you can control Trover with the joystick and buttons. He can perform jumps, attacks, and other third-person gaming basics like rolls and double-jumps. Trover also moves you through the levels, since he must be guided to a checkpoint before you can warp to him.

This gameplay mechanic feels totally unique, but occasionally, a little disjointed. Trover runs, jumps, and fights like any other third-person action hero. At the same time, the Chairorpian serves as your first-person camera view. Occasionally you’ll have to “pop-up” into the air to get a new view of your surroundings. Once you adjust to this unique arrangement, you can set your vantage point, then focus on the fighting and platforming, which is often varied and fun.

Later in the game, you can stack and throw objects by centering them in your view. This sometimes requires full neck motions that, while seated, didn’t feel very comfortable. However, it is satisfying to telepathically pick up a dropped javelin and send it flying at an enemy.

In porting this game from PSVR to the Oculus Quest, you’ll notice that the controls in the Chairorpian’s virtual hands bear little resemblance to the real ones you hold in yours. This occasionally makes using the controls confusing, like when a character screams at you to “use the D-pad,” which the Quest controllers do not have.

Everyone Has a Plumbus In Their Home

Trover Saves The Universe eases you into things with an increasingly weird tutorial spread over several levels. For example, instead of just handing you the pop-up ability, you have to talk to Mr. Popup, a flying, naked man with a bandage over his crotch. Why deliver instructions via text when it can be screamed at you by a freakish lunatic instead?

By Andrew Podolsky
In Apps

If you’ve ever seen Rick and Morty, especially the Interdimensional Cable episodes, you’ll be familiar with the stammering, free-wheeling style of absurd dialogue that infuses the game. Characters often seem to be making everything up as they go along. You’ll be told about a level called Shleemy World or someone named Doopy Dooper, and you’ll think, that can’t be a real thing, right? It’s nonsensical and often delightful.

And if you can’t get enough Rick and Morty, you’ll especially enjoy listening to this game’s characters yammer on and on about literally anything at all. Justin Roiland voices several main characters, and other members of the Rick and Morty cast are featured as well. Hours of rambling dialogue are included in the game, so if you’re in no hurry, it’s great to just sit and listen to the downright bonkers enemies and NPCs.

After completing the main game, which took me about four hours, you can replay each environment and search for hidden power babies, which increase Trover’s life bar. You’ll also find a bonus mission called Important Cosmic Jobs, which lets you solve puzzles in Trover’s banal office workplace. These extras are enjoyable, and Trover feels like a decent value at $30. However, most of that value comes from listening to an excessive amount of dialogue, so make sure you’re at least slightly familiar with Roiland’s style of humor before purchasing.

For all the random absurdity in Trover Saves the Universe, it seems unlikely that it would arrive at any kind of serious point, but sometimes, it does. For example, Trover shares his feelings about “spaceism,” a sort of racial tension between alien species. It’s either one of the main arcs of the story, or a random aside tossed in during the game’s marathon dialogue recording sessions. It’s a little hard to tell amongst all of the gross, delightful nonsense.