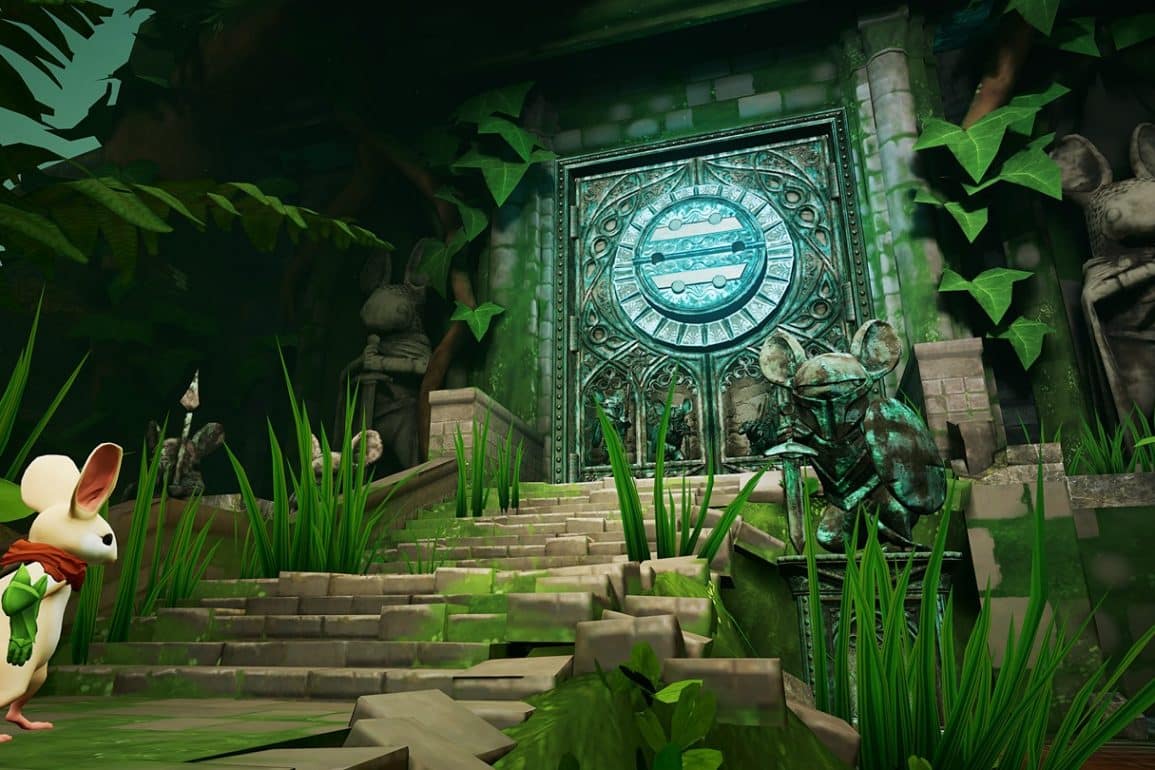 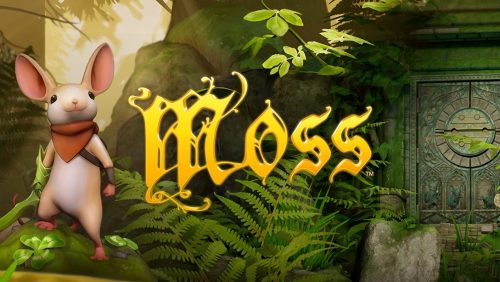 GO ON, HAVE A NIBBLE

Despite having been converted to VR a couple of years ago, and owning both PSVR and an HTC Vive before delighting in the Quest, I’ve never played Moss before. I’ve admired the game, read reviews of it, and wanted to play it, but something has always kept me away. Maybe it was the slightly higher than average price, or my horrendous misconception that the platforming controls were an indirect, point-and-click affair, akin to that seen in République. After firing up the Quest version, however, I felt immediately foolish for not having dived in before.

It often surprises me how many games get loading screens wrong, particularly in VR. It’s the first thing you see of a game and is also seen regularly throughout the experience. Vader Immortal is terrific, but the loading screen features a small, low-resolution flat picture of Vader which dares to jerk around in the headset. Moss keeps it simple, with its lovely golden logo floating in a black void, but it gives the first impression of a class act.

As, indeed, does the first scene; a reading lectern in a large hall of learning, complete with sputtering candles and dust motes. Moss is presented as a giant, leather-bound book, with pages that have to be physically turned. This is a marvellous and pleasing interaction in VR, and very slickly realized. The literal storybook approach eventually ends up hurting the game, but we’ll talk about that later. I want to wax lyrical about the many charms this game has to offer before I start complaining about its annoyances.

OF MICE AND MEN

Let’s get the most important thing out of the way. Quill, the game’s main character, is an incredible creation. Her animation is awe-inspiring, and controlling her is a delight. Using VR to convey her scampering about in beautiful, dolls’ house-scale dioramas is one of the best uses of the medium for gaming that I have yet witnessed.

By casting the player as a benevolent and proactive camera, the developers have freed themselves from the eternal complexities that having a third-person platforming camera always creates. Polyarc have instead thrown all their efforts into making the puzzle-platforming as charming and rewarding as possible, and their work is (for the most part) stellar. The scale works brilliantly; to the player, Quill is the size of a real mouse, and the world she inhabits is crammed with wonders and tiny details. There are also tantalizing glimpses of the world of humankind; discarded, rusty relics of war and distant shipwrecks that add immeasurably to the atmosphere.

The player, or ‘Reader’ as the game would have it, becomes Quill’s mentor during the adventure. (The game’s artwork reveals that the Reader’s appearance is copyright-infringingly redolent of No Name from Studio Ghibli’s Spirited Away). The levels are split into single dioramas, featuring platform jumps, switches to activate, and movable scenery. The player is free to peer all over the scene; while the game is played seated, it’s good fun to stand up and get a different perspective on the scenery.

Quill is moved with the left thumbstick, and the buttons on the right controller make her jump or attack. The controllers also act as the Reader’s virtual hands, represented as two glowing orbs. Your orbs can move platforms and levers, restore Quill’s health, and position or control some of the villainous creatures that inhabit the fairytale world of Moss. For the most part, the system is elegant and intelligent and smartly designed to make the player really bond with Quill. It also provides some comically panicked moments of combat or problem-solving that will occasionally make you feel like a struggling puppeteer. You’ll find yourself pulling beetles around to pressure pads while simultaneously positioning your mouse friend on a moving platform across the screen.

The combat is simple and not quite as slick as the platforming, and while Quill’s animation is flawless, she can feel clunky in a fight. Overall though, the combination of puzzling, platforming, and stabbing is lovely.

Moss created something of a name for itself when it was first released on PSVR, not least because it presents an unusually high level of polish for a VR game. The graphics are beautiful, Jason Graves’ soundtrack is marvellous, and the production is generally verging on what might usually be expected of an AAA title. There are, however, a few things which hold it back from being perfectly polished and prevent it from scoring more highly. The biggest thing is the narrative and how it presents itself. As Moss begins, you turn the pages of a book to get the backstory, illustrated throughout the old dusty tome. It’s mediocre fantasy fare, and forgettable. Sadly, the major story beats are all presented in this manner, and as the game wears on it seems less a deliberate attempt at style and more of a budgetary constraint.

Elsewhere, the Quest version shows signs of corners cut, and it shouldn’t. The water in this game looks shockingly bad. It’s a single unmoving texture that looks at best like dull, wet tarmac. It really jars amongst the sheer beauty of the rest of the graphics, and there’s a lot of it. I just can’t believe such a talented team could not have addressed this in a far more effective and attractive way. The first beetles the player meets on the journey, once defeated, abruptly disappear with a total lack of animation, not even a fade-out, and it looks like something’s missing.

These maddening inconsistencies and rough edges are all the more apparent because the rest of the game is so deliciously well-realized. It’s gorgeous to look at, and an excellent proof-of-concept for platforming in VR. There are some smart puzzles and brilliant set pieces, and controlling Quill is a complete joy. I just wish more care had been taken with some other essential details.

The decision to only use one voice actor, narrating and performing all the characters, may also have been a mistake. Morla Gorrondona gives a spirited and professional reading, but by the point in the game that she’s voicing a conversation between Quill and a giant toad, it just seems like a bad idea. My personal feeling is that Polyarc should have taken another lesson from Ico, (a game to which Moss clearly owes some debt), and presented a wordless narrative. The fantastic efforts to bring Quill’s world to life could have been realized without the need for such a dreary, well-worn narrative device – or even a script of any kind. Show us, Polyarc, don’t tell. It worked for Ico and Brothers: A Tale of Two Sons, and it would have worked amazingly well here.

There are a couple of fights along the way which are frustrating and repetitive and seem to be there just to pad out the game’s short running time. There’s a boss fight in the Twilight Garden that ends on a bum note, not giving the player any cues that they might have found the right solution. This sort of thing makes some moments confusing and makes the execution seem sloppy.

Moss offers around three hours of game-time, depending on your skill level. It can last a little longer if you factor in collecting the hidden scrolls which, when they’re all collected, reveal a secret. Some of them require considerable mental and/or physical skill to get and present a decent challenge.

It’s a pity that Moss acts as a prequel to a game we’ve yet to see, and fizzles out far too soon. Despite it being one of the pricier offerings on the Quest, I think it’s worth the entrance fee, but as ever your mileage may vary depending on your priorities.

Moss
TLDR : Summary
In many ways, Moss is one of the best games you can buy for VR to date - we love you Quill, but there are just a few things holding you back from perfection.
Concept
9
Gameplay
8
Graphics
7.5
Audio
8
Longevity
6
User Rating1 Vote
9
Pros
Beautiful graphics, sound, and animation
The main character is a joy
Great use of VR
Cons
Forgettable story
Needlessly rough-cut corners
Over too soon, even with the padding
8
Great
Get it on the Oculus Store
Moss